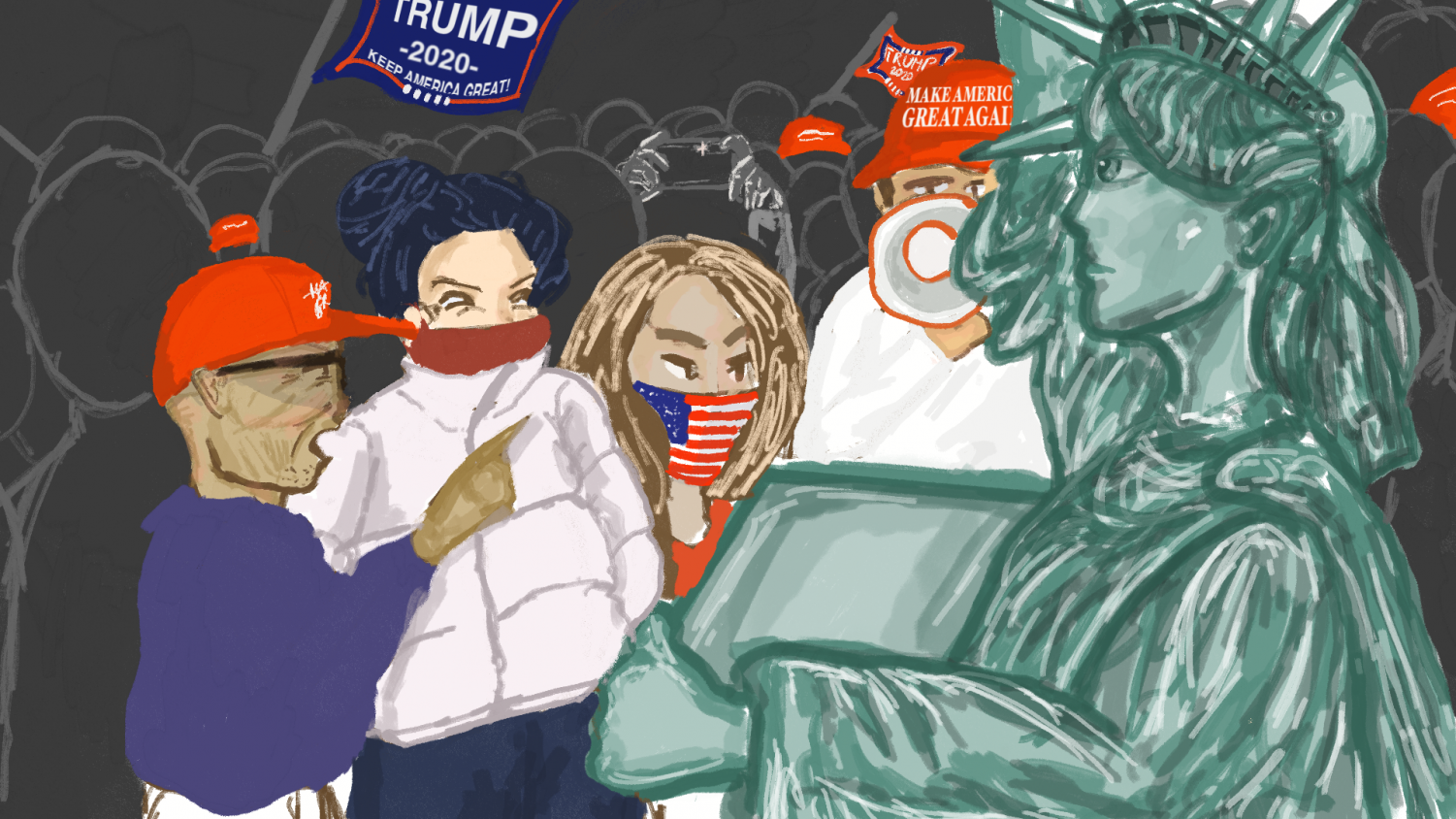 The events at Capitol Hill on Jan. 7 demonstrated an attack on American democracy, Rida Zar writes.

In 1801, on the eve of his last day in office, John Adams — the second president of the United States — appointed a total of 58 “midnight” judges to the Federal Circuit courts.

He hoped to maintain a Federalist influence as political power shifted for the first time to another party under the next president, Democratic-Republican Thomas Jefferson.

Adams’ actions demonstrated an undemocratic abuse of power. Judges who were appointed to the Supreme Court such as John Marshall served life terms upholding Federalist values without having gone through the proper approval process, even when their rulings went against the popular opinion of the people.

America yet again endured another undemocratic stunt Wednesday after some radical supporters of President Donald Trump, geared up in Make America Great Again merchandise and American and Trump-labeled flags, plundered the Capitol building.

The violent siege of a historic building cost the safety of the lawmakers, police and Trump supporters involved, and went against basic democratic ideals of popular sovereignty by opposing the 2020 election results.

In a Jan. 6 Tweet now taken down by social media platform Twitter, Trump said these words to his supporters storming the Capitol building on Wednesday in protest of President-elect Joe Biden’s victory. At 9 a.m., Trump addressed his supporters near the White House for the “Save America Rally.”

According to the Washington Post, Trump said, “We’re going to walk down to the Capitol and we’re going to cheer on our brave senators and Congressmen and women,” referring to the lawmakers who would later confirm Biden’s victory. “And we’re probably not going to be cheering so much for some of them.”

He continued, offering words of encouragement: “You will never take back our country with weakness. You have to show strength and you have to be strong.”

Instigating a crowd to obstruct havoc in a government facility goes against the very essence of democracy — that the government derives its power from the people.”

With this, thousands of his supporters swarmed to Capitol Hill, getting as far as Speaker of the House Democrat Nancy Pelosi’s office and the Senate chambers.

Rioters who abstained from entering and resisted the mob mentality did the right thing by keeping themselves from harm’s way. Instigating a crowd to obstruct havoc in a government facility goes against the very essence of democracy — that the government derives its power from the people.

The protesters, many without masks, successfully infiltrated arguably the second-most secure building in the most militarized country, paraded Trump flags in the building, shattered windows and fought with the police, leading to the death of five people including U.S. Capitol Police officer Brain Sicknick, who died from injuries sustained on-duty, according to various news sources. One man carried a large confederate flag, largely recognized as the symbol of an illigitate nation that declared war on the American ideals of life, liberty and the pursuit of happiness.

Wednesday’s actions illustrated a horrific and terrifying scene to think about, especially considering that the Capitol has not been attacked to such an extent since British troops burnt down the building in the War of 1812.

Regardless, no American should ever conceive the notion of infiltrating the premises in the first place because it can be interpreted as a seditious act or one to incite a civil war, which the nation experienced only once before. It took law enforcement a little more than four hours to secure the building, according to a Jan. 6 Los Angeles Times article, making a total of 61 charges with four being weapon related, according to a Jan. 9 CNN article. At least six firearms were recovered in addition to two pipe bombs. The prevailing chaos resulted in the injury of 56 police officers, including an officer who claimed to have been beaten and tased by angry protesters. In no sense were rioters retaining a sense of order. Grief at a preferred candidate’s loss in an election, while understandable, goes too far when it means invading a federal facility in large crowds considering the danger it puts all those involved in.

What should have been a peaceful day for not only those living in D.C., but also those working there and those who chose to exercise their First Amendment rights, fleeted away with every passing hour as more and more protesters illegally overran the building.

Devotion to a fair and just future for its habitants remains a large aspect of America’s appeal. To keep their hopes up for a victory, extreme Trump supporters violated the righteous ideology so many continue to hope for, but the fact remains that Biden will likely be inaugurated regardless of their horrific action. The violation of a sacred American facility and the endangerment of people’s lives persists as the only outcome.

The violation of a sacred American facility and the endangerment of people’s lives persists as the only outcome.”

“This was a fraudulent election, but we can’t play into the hands of these people. We have to have peace.”

Many of Trump’s supporters took his words as encouragement, leading to Twitter deleting three of his tweets and muting his account for 12 hours for violating their Civil Integrity policy and, later on Jan. 8, permanently. Social media sites Facebook and Instagram also rightfully announced their decision to indefinitely ban Trump’s account. The president often spread misinformation to his followers about wrongfully losing the election, using his platform to spread hate. A line must be drawn to prevent extensive damage and with the provocation of the Capitol Hill onslaught Trump took went too far.

Democrats and Republicans worried about the future of our democratic system should also be upset with the spread of misinformation to loyal Trump supporters, the result of allowing lies to spread without being checked.

“We gather due to a selfish man’s injured pride and the outrage of supporters who he has deliberately misinformed for the past two months and stirred to action this very morning,” said Utah Sen. Mitt Romney, referring to Trump on the Senate floor after police secured the building and the congressional leaders returned to finish the electoral vote certification. In February, Romney was the only Republican who voted in favor of Trump’s impeachment, according to a Feb. 5, 2020 USA Today article. As an official elected to protect the integrity of our country, Romney and other politicians standing up against the president’s misdoings should naturally do so. Power gone unchecked will lead to more damage than it already has, grieving awareness to their supporters by speaking up can encourage others to see the wrong in Trump’s action.

Members of both parties, regardless of their support for Trump, acknowledged the dreadfulness and preventable nature of the riots had Trump not continuously insinuated a fraudulent election.

“You see the way others are treated that are so bad and so evil.”

If right-winged Trump supporters want to host protests of their own, an essential part should be remaining peaceful and respecting public property — neither occurred at the Capitol Hall riot.”

The First Amendment secures Americans’ right to protest peacefully. However, the violent and chaotic herd of people who broke into Capitol Hill violated the boundaries of what can be considered peaceful.

In comparison to the peaceful Black Lives Matter [BLM] protests on June 1, Wednesday’s rioters have nothing in common.

Domestic terrorists from the Capitol siege arguably received better treatment than peaceful protesters by police, a slap in the face to many BLM supporters. Videos of people in D.C. Capitol Police jackets removing barriers to allow protesters entry into the building and another posted to Twitter by journalist Timothy Burke with an officer taking photos with rioters emphasizes the difference in treatment. BLM’s protest — focused on raising awareness against systemic racism — had 316 arrests, more than five times as many made at Capitol Hill so far.

If right-winged Trump supporters want to host protests of their own, an essential part should be remaining peaceful and respecting public property — neither occurred at the Capitol Hill riot.

“I know how you feel. But go home, and go home in peace.”

Even at home in Southern California, we experienced protests ranging from 300-400 people in downtown LA, Newport Beach, Huntington Beach and Beverly Hills, according to a Jan. 6 Orange County Register article, where demonstrators seemed to echo the idea of a fraudulent election.

A speech given in Washington D.C. prompted violence all the way in California, a state well known for being left-leaning. Denying the effects of Trump’s words and the violent results of them would simply be ignorant.

Although both Adams and Trump have violated America’s democratic standards, we can at least praise Adams for the peaceful transition of power to Jefferson.

In spite of wanting to keep his own political party in power, Adams graciously stepped down so that America’s next rightfully appointed president could take his place as leader of the nation, even if it meant a loss of Federalist influence in the government.

Unfortunately, the same honor did not apply to Biden. Only after the Jan. 6 protests did Trump verbally concede in a Jan. 7 video on his Twitter account, but later that day announced his decision to not attend Biden’s inauguration. Had Trump acknowledged his election loss earlier, Wednesday’s damages could have been avoided. Nevertheless, the step is essential for America’s journey to heal from the Capitol riot as we take one step at a time toward a future befitting for our democracy. 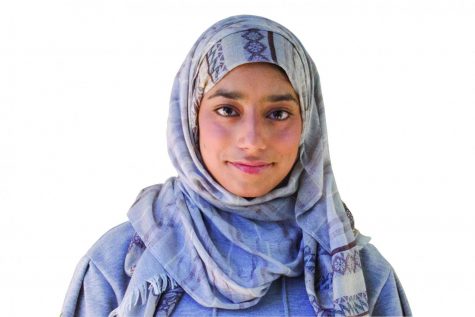 Rida Zar, Opinion Editor
After her first year writing for The Accolade, senior Rida Zar continues her work on staff as the opinion editor. When not writing articles, she involves herself in clubs like the Junior State of America where she upholds her position as senator. With a love for traveling, Zar hopes to see many beautiful sceneries in the years to come. In her free time, Zar enjoys going on walks and playing with her cat Theo.

Donate to The Accolade
$0
$500
Contributed
Our Goal
Submitting donation...