Students wait in line Jan. 12 at the Roundhouse during lunch. (Audrey Seo)

Students wait in line Jan. 12 at the Roundhouse during lunch.

Head to Head: Would You Cut In Line To Get Food?

A Lancer ‘acts wisely’; so getting ahead without having to wait violates social norms

I grew antsy as the first five minutes of break passed. My stomach growled, and the line to get food from the Roundhouse remained stagnant.

Just as the cafeteria staff came into view, a girl abruptly shoved past my friends and me to join her group waiting at the front of the line.

Any student who has purchased food from the Roundhouse or the cafeteria this school year – the first in which campus meals can be picked up for free during break and lunch – can surely relate to my experience.

What’s worse was this happened to me the first time I ever picked up a meal from school. I had been standing there when that girl chose to join her friends in line ahead of me – no waiting required for her like the five minutes I had to endure.

I felt disrespected and annoyed because break lasts only 18 minutes — I had been waiting for more than one-fourth of the time.

For students to cut any line and gain a little extra time while others have been waiting a longer amount in the back shows just how selfish and greedy some can be.

Break and lunch are sacred and exciting periods of the school day for students; we’re let out of the classroom and can finally fuel our body with much-needed food, rest and socialization with friends.

So those cutting in line violate proper etiquette; they should patiently wait their turn. These manners should be kept, not only while at school, but off campus and in the “real world” as well.

As a senior, I have seen how Sunny Hills emphasizes the importance of safety. However, perhaps the recent development of line cutting originates from the underclassmen – many of whom have never stepped foot on our campus until this school year because of the COVID-19 pandemic.

Although arguments with those who choose not to wait in line could develop, I chose not to pick an oral dispute with that girl who did me wrong because I don’t think it’s worth my while to do so. Others who witnessed the same faux pas had the same maturity level as I had demonstrated.

So it should be everyone’s duty to act with respect and care for others and not overreact when some choose a shortcut to get their meals.

If students refuse to follow such an understanding, school officials should take action and enforce a consequence. A warning should be given the first time, and if caught again, detention or Saturday school should be issued.

These are reasonable consequences because it teaches students that cheating of any kind — even in something as trivial as cutting a lunch line — will not be tolerated. To prevent such further acts, administrators can put up “No cutting in line” signs near the two sites where meals are distributed as a friendly reminder to students.

Some may argue that cutting in line represents a rite of passage at school – social networking at its best. It’s unfortunate that those in the back couldn’t move up because they don’t know anyone ahead of them.

This explanation is unacceptable. Respect for each other’s wellbeing should trump the benefit of someone knowing a friend who knows a friend to skip waiting in a break or lunch line.

The school’s mission statement sign in every classroom says it best: “A Lancer … acts wisely.”

Dominique Chang, Assistant Business Manager
Dominique Chang strives to write exciting and new stories for The Accolade. She is currently the assistant business manager for The Accolade as well as the co-founder of the Student Business Club at school. She’s very interested in business and would eventually want to pursue a career in the field. She hopes to finish off her senior year well, continuing to write stories for The Accolade as well as pursuing her own endeavors.
Leave a Comment

It’s a dog-eat-dog world out there, and that’s why I have no beef about what I do

According to a recent Accolade online poll of 76 respondents, 62% agreed that “cutting [in a food line] is against my moral judgment.”

Another 24% agreed that this recurring practice during break and lunch occurs based on how students feel one day over the next.

occurs based on how students feel one day over the next.

In the minority lies people like me — only 13% had the “survival of the fittest” mentality of taking advantage of getting meals faster through friends’ help in the food line outside the cafeteria or Roundhouse.

Although swooping in the middle of a line tends to be universally known as a disservice, I see it as using my resources. My friends are just saving a spot for me because I’m not able to get there as fast as they can.

As an athlete, food fuels my performance. At the beginning of the school year, I would go into two-hour practices on an empty stomach, and I noticed it was affecting my endurance and motivation on the field.

Waiting in line like mostly everyone else consumes too much of my precious time, especially when I have to be out on the soccer field passing the ball within minutes of my last class ending.

So that’s what prompted me to make some changes by finding a way to speed up my meal gathering.

Typically, no one says anything when I push my way through the beginning of the never-ending line.

Sometimes, I would get the occasional shouts like, “Get in the back of the line,” or “You came later; you should go to the back.”

I have learned to tune them out.

Though some may argue that it’s wrong of me to take advantage of my fellow peers, in this cutthroat society, some individuals are bound to have a slight edge over others.

Some students, especially those who have PE, are allowed to leave their third or fifth periods earlier to start waiting in line before break or lunch starts.

Is that fair? Shouldn’t school officials require all teachers to release students after the bell rings?

Some have classes closer to the cafeteria or Roundhouse than others. They will have some type of an advantage too. Is that fair?

Should school officials designate a rotation of certain classrooms being allowed to get food to level the playing field?

Everyone has the ability to cut, so why be so petty about it? After all, it’s a dog-eat-dog world. 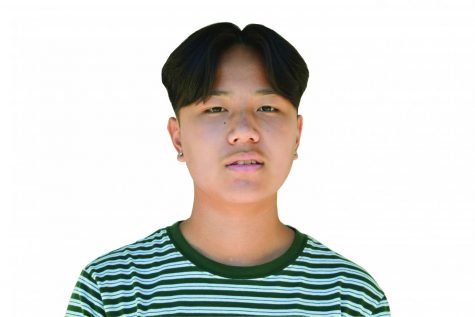