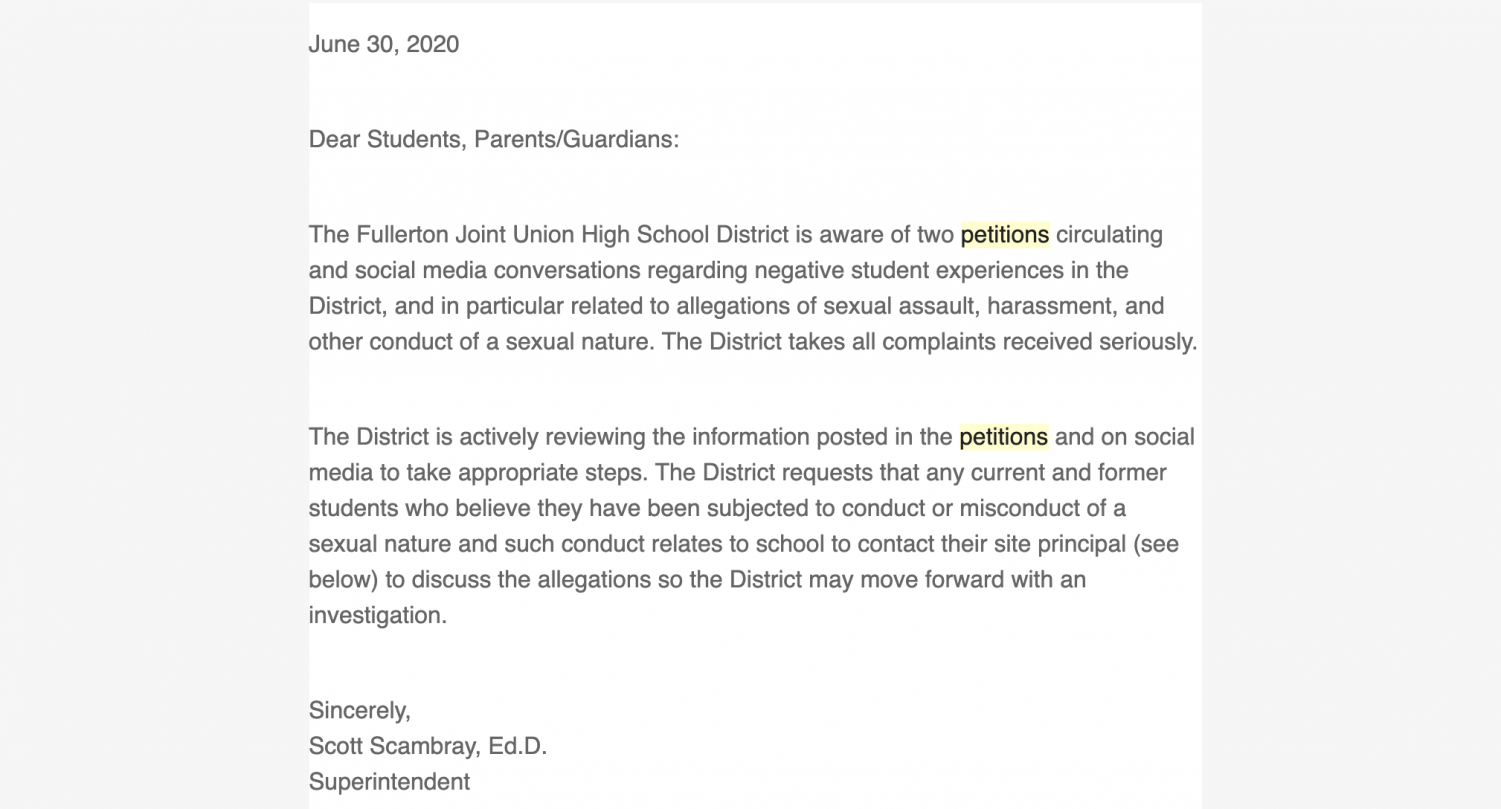 A copy of superintendent Scott Scambray’s email to students in July 2020. (Hannah Kim)

A copy of superintendent Scott Scambray’s email to students in July 2020.

For many students who checked their school emails during the summer, this announcement from the superintendent of the Fullerton Joint Union High School District [FJUHSD] did not come as a surprise.

Emailed July 1 at 1:51 p.m. via Aeries communication, FJUHSD superintendent Scott Scambray’s two-paragraph statement addressed to “Students, Parents/Guardians” on June 30 went straight to the point as he writes in his opening paragraph:

“The Fullerton Joint Union High School District is aware of two petitions circulating and social media conversations regarding negative student experiences in the District, and in particular related to allegations of sexual assault, harassment and other conduct of a sexual nature. The District takes all complaints received seriously.”

It concludes with the following plea:

“The District is actively reviewing the information posted in the petitions and on social media to take appropriate steps. The District requests that any current and former students who believe they have been subjected to conduct or misconduct of a sexual nature and such conduct relates to school to contact their site principal (see below) to discuss the allegations so the District may move forward with an investigation.”

Since that statement, no subsequent emails have been sent to provide any updates to students, parents or guardians. The Accolade has reached out to Sunny Hills school officials to determine if any such investigations had occurred regarding students enrolled on this campus, and after the staff’s top editors met with administrators, it was agreed that reprinting any of the online material that the superintendent had alluded to or contacting any of the people named in those social media posts would hinder any investigations that SH administrators may be working on.

School officials also could not elaborate on anything that the superintendent wrote about, citing confidentiality because the petitions and social media postings involved minors.

Nevertheless, assistant principal Hilda Arredondo — the administrator who usually works with local authorities to investigate allegations concerning what the superintendent had described as “conduct or misconduct of a sexual nature” — offers this advice to anyone dealing with sexual harassment or assault or any type of bullying or cyberbullying:

“I would advise students that face any type of harassment to not engage in a verbal [or] written altercation,” Arredondo said. “Students should report the incident and not continue communication with the individual.”

STUDENTS, PARENTS AND LEGAL EXPERTS REACT TO THE SUPERINTENDENT’S NOTICE

Many students said they had expected school or district officials to weigh in on the social media buzz.

“I am glad that the district was able to put up a ‘face’ and act as they care because I think that is a feat in itself.” junior Donghyun Kim said. “[Nevertheless], my reaction to the superintendent’s email was pretty lukewarm, and I was not all that impressed.”

Another junior, Diya Patel, said it was important for the superintendent to ask other potential victims to come forward and contact principals in the FJUHSD.

“I am actually happy they addressed it because if not, there would have been no change, and people would still be scared to speak up,” Patel said.

Senior Kyle Lee, however, felt the superintendent’s response served more as a Band-Aid to the problem than a solution.

“It feels like the district had to say something, but they just dropped it afterward. … Communicating with the parents and students on what the district did to solve the problem would show others that there are actually repercussions being taken,” Lee said.

Junior Mary-Grace Rovira’s father, Ward, said he did not agree with the district’s intentions behind the email.

“The district is trying to insert themselves into the chain so they can write the narrative, which is wrong,” Ward Rovira said. “I would never go to the district and make a complaint to them. If I thought I had a credible complaint, I would be calling the police, and the police would [be the ones to] call the district.”

“I certainly expect that the district would — and absolutely should — take any sexual harassment claims incredibly seriously,” Jhawar said.

I am glad that the district was able to put up a ‘face’ and act as they care because I think that is a feat in itself.[Nevertheless], my reaction to the superintendent’s email was pretty lukewarm, and I was not all that impressed.”

Attorney Steve Estey’s San Diego law firm specializes in representing victims of sexual assault cases, and after reviewing Scambray’s two-paragraph statement, Estey said it is common for school districts to cover up the collateral damage that the accusations cause.

“[I have] seen multiple cases where schools will cover up the abuse because the negative publicity for the district is really bad, and the people in charge [do not] want to explain why a student was sexually abused on their watch,” he said. “The less media exposure to the incident, the better for the school district.”

BLAME IT ON THE COVID-19 PANDEMIC?

FJUHSD psychologist Ellen Stickler, who is assigned to Sunny Hills, believes the coronavirus pandemic and subsequent state-mandated lockdown could factor into what happened with FJUHSD students’ #metoo-like allegations posted on social media over the summer.

“I think that the pandemic has caused a lot of difficulty with both kids and adults because it completely upended our daily life and our schedules,” Stickler said. “I also think that a lack of in-person social interaction — a byproduct of stay-at-home, distance learning, etc. — can have a negative effect on the mood and overall mental well being [for] some students.”

She also offered insight on the consequences of posting on the internet.

“Please think or re-read before posting,” Stickler said. “Things posted on the internet can stay on there forever. If there is something inappropriate posted which causes concern, it is better to talk to a trusted adult than post it on social media.”

A RISE IN STUDENT ACTIVISM

Many of the Sunny Hills students and parents whom The Accolade interviewed recalled the superintendent’s digital communication but were surprised about the social media chatter involving sexual harassment or assault.

All of the sources The Accolade contacted also agreed that Sunny Hills is a safe campus and that what happened over the summer does not represent a growing problem here.

“I was keeping up-to-date with all the petitions and the survivors’ stories on social media so it did not surprise me, but if I had no clue about what was happening, I would have been more disappointed than shocked,” senior Samantha Alvarado said. “I am glad the district noticed the situation that was happening.”

At the start of her freshman year, Alvarado took action against sexual harassment and other topics such as racism and misogyny by posting different infographics on her Instagram, Facebook and Twitter accounts to inform her followers.

“#MeToo is [a] social movement that is against sexual violence and sexual assault,” according to one of her posts on Instagram. “It advocated for people who have survived sexual violence to speak out about their experience.”

“I feel like a lot of people think it is embarrassing or shameful that they go through this stuff, but I want them to feel safe and come forward,” said Alvarado, who has come across some of her friends telling her that they have been sexually harassed or assaulted.

She has a different take from school officials in the matter of how alleged victims should come forward.

“Many people chose to share these sensitive topics to social media because with social media, information spreads quickly and they probably feel much more comfortable in doing it in this way than confronting someone or actually talking to someone in person,” Alvarado said. “Any form of reporting is responsible, especially if the individual feels comfortable with sharing such sensitive information.”

I was keeping up-to-date with all the petitions and the survivors’ stories on social media so it did not surprise me, but if I had no clue about what was happening, I would have been more disappointed than shocked.”

During the pandemic, she has noticed more of her followers taking an interest in social matters compared to when she first started circulating facts about social issues.

“When we were in school, it was like everyone was all hyped-up about TikTok and doing dances,” Alvarado said. “I just feel that more people have ‘woken up’ and have started to realize some issues that were normalized that never should have been. Many more people — from my point-of-view — have become much more progressive and are slowly starting to do their part to dismantle these issues.”

Kim said he felt convicted to post on social media content not just to make more viewers aware of what sexual harassment is or isn’t, but also to inform people about other social issues like police brutality and the importance of having a healthy body image.

Before the BLM movement, he said he witnessed his friend being sexually harassed while the two of them took a walk at the beach, and this incident served as his first inspiration to promote awareness.

With Sexual Assault Awareness Month coming up in April, he is currently brainstorming ways to raise donations.

As of Feb. 18, Kim has over 2,600 followers on Instagram and posts at least once every two weeks. His ultimate goal is to educate his followers on the world’s social issues.

“I am focusing on educating myself on previous movements, but the #MeToo movement helped inspire me as I was educated enough to partake in it,” he said.

Kim also believes that social media remains a safe outlet for victims to seek support and reveal their stories.

“It is also just a matter of fact that teens would feel more comfortable sharing with their peers than older people, as we have a sense of camaraderie and a special bond that adults cannot involve themselves in.”

WHERE DO WE GO FROM HERE?

Principal Allen Whitten vocalized his thoughts on Alvarado’s and Kim’s social work to help their fellow classmates with their experiences.

“I have not seen either of their social media sites, but I like the idea of students sharing helpful information on what to do and where to turn if someone feels they are a victim of any form of harassment,” Whitten said. “We all need to look out for one another, and that is one of the things I love about SHHS.”

He shared his praise for students supporting each other.

“Our students care for and look out for one another,” Whitten said. “It is one of the things that makes this community very special.” 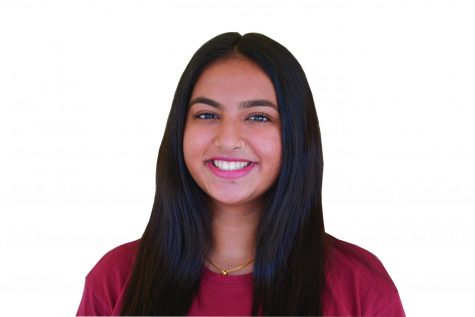 Nevya Patel, News Editor
After spending her first year on The Accolade staff as an assistant business manager, Nevya Patel earned the position of news editor for the 2021-2022 school year. Other than wanting to increase the newspaper's readership, her goals as a senior are to improve not only her editing abilities but also her reporting and writing skills.

Patel is also involved in the Advancement Via Individual Determination program — which she is co-president of — as well as many clubs such the Indian Student Association and the SHHS DoSomething Club, which she founded. Her hobbies include reading (mostly fantasy and romance novels) and listening to music.