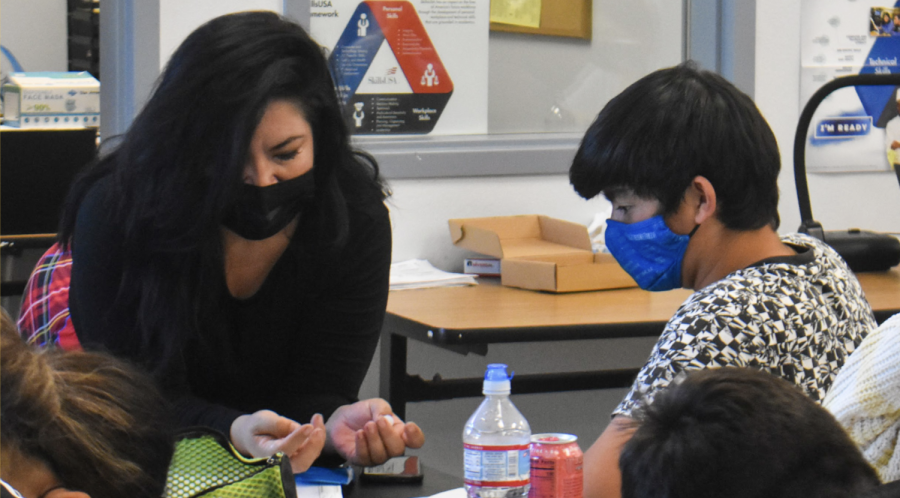 New Engineering Pathways to Innovations and Change [EPIC] teacher Gracie Mariner recalls the time when she had to free a trapped wire 17 years ago while she was working at Sasco Electric in Fullerton.

The wire was inappropriately installed and led to complications in the electrical unit.

A male co-worker attempted to help her, and he succeeded – except he broke the wire because of excess strength. The next time she faced the same task, she created a pulley system that stretched the wire out but still left it in one piece.

This situation made her realize that, while women may not be stronger than men, they can still fix difficult situations.

Mariner, who was hired in September after the start of the 2021-2022 fall semester, has navigated through three career changes and educational opportunities before becoming a teacher. One of her goals is to inspire female students to follow in her footsteps, especially after Mariner’s experience working in places where female workers were heavily outnumbered by their male counterparts.

“I know women get intimidated [by the engineering field],” she said. “That’s one reason why I went into teaching because I wanted to show that, if I did it, then any other female could do it.”

In her classes, Mariner said she has noticed a five-to-one ratio of male students to female students, which she labels as an improvement since she worked in businesses where women made up less than 1% of the workforce.

Although it is a desire of hers to see a change in gender representation in future engineering classes, the new EPIC instructor said she wants every one of her students to succeed, regardless of gender.

Mariner gave the following account as to how she ended up in the education profession:

However, Mariner realized that becoming a veterinarian was not the career path for her.

“After discovering that I just could not handle putting down a pet, I decided to move into the field of my second passion, which was engineering and construction,” she said.

Mariner then took up work as an apprentice – a beginner who was learning the ropes of the engineering field – at Bracken Electric Inc. in Los Angeles County’s Lake Balboa at the age of 22 for one year. Once she decided that she wanted to work on larger projects, she jumped into the International Brotherhood of Electrical Workers [IBEW] Union, which is based in Washington, D.C., in August 2004.

At the IBEW, Mariner worked with different companies like Sasco Electric and the National Fail Safe in Westminster to work her way up to becoming a journeyman – a skilled worker who has completed an apprenticeship – after three years in 2008, when she left the IBEW.

Once she worked her way up the ranks and became a supervisor, she faced opposition from other men in her work field, including a time when a male co-worker threw his toolbelt at her. Others would complain about her position of being in charge, claiming that their years of experience overruled her ability to complete her job without errors.

“I went into the [engineering] industry and, even though people think that women can’t work in construction or that they won’t understand anything with construction or engineering, I excelled in it,” Mariner said. “It was super hard having to prove myself every day. It was physically and mentally demanding.”

To emphasize her presence, she exerted a great effort to meet strict deadlines and craft flawless projects while learning high and low voltage, sound and date, electronics and programming. She moved up the ladder in her field, working for six months as a project manager assistant.

BACK TO SCHOOL FOR MORE ACADEMIC DEGREES

Upon enrolling at Fullerton College, after leaving the IBEW, Mariner completed her associate’s degree in drafting in 2009. After being in charge of and leading multiple projects, she received a bachelor’s degree in management, which allowed her to officially work as project manager from California State Polytechnic University, Pomona, in 2012.

Although she created engineering drawings and graphical representations of projects throughout her career before becoming a teacher, Mariner said she excelled as a project manager the most while at Pacific Traffic Control, a Los Angeles-based company that specializes in street closures – drawing the diversion of traffic during road construction.

She stayed there for two years before switching to Bracke Manufacturing in Irvine in 2012 to draw mechanical and radio frequency parts. At this new job, she found herself training newly hired employees even though they had their degrees in drafting.

“I started seeing a lot of people graduating from college who didn’t know the basics of drafting, and I didn’t know why,” Mariner said. “I was teaching them a lot, and I thought that instead of teaching them at my job, I should just teach students at school.”

Mariner continued working at Bracke Manufacturing for one year while she entered the education field as a computer drafting and design teacher at ITT Technical Institute in Vista, where she worked for nearly four years before it closed in 2016. To juggle her responsibilities, she worked in the morning and taught in the evenings.

“Once they closed, I thought that if I start teaching even younger students, then maybe they will be more college ready and can get internships early,” Mariner said. “Then they would know drafting, get the skill a lot better as far as what they needed to draft and how they needed to engineer things for what was expected on multi-million dollar projects.”

Once ITT Technical Institute shut its doors, she joined Inspire Charter in Laguna Niguel in 2017 before wanting to acquire her teaching credentials in 2015. The process took three years with a break in 2019 when her daughter was born, she said.

FROM WORK FORCE TO TEACHING FORCE

Mariner ceased working at Inspire Charter in March 2020 — when the COVID-19 pandemic led to a global shutdown — and completed her teaching credential in engineering and architecture in August 2020 from the Orange County Department of Education.

After deciding to come back to teaching, Mariner applied to work as a substitute teacher in the Fullerton Joint Union High School District but instead was offered a full-time position to replace Daniel Zanone, the ROP’s instructor who also was tapped to lead EPIC.

Like with former agriculture teacher Jeremy Cates, Zanone sent an all-staff email over the summer announcing his plans to move on from working at Sunny Hills.

Mariner said she applied to teach at Sunny Hills through the ROP and landed the job to teach Engineering Design and Development, Principles of Engineering and Introduction to Engineering, which take place during third, fourth and fifth periods, respectively.

“It takes a lot of organization,” the engineering teacher said. “You have to really know how to maintain your time. I only allow myself to work on something for a certain amount of time, so I’m not unprepared for the next thing.”

EPIC student senior Maximillian Lopez said because of his two years of working with Zanone, he had to make an adjustment this year to a new EPIC coordinator.

“My first impression was very biased because I loved my previous teacher, and he became the reason I loved going to school, so I was naturally hesitant at first,” Lopez said, who is in Mariner’s third period Engineering Design and Development class. “She is a very nice and down-to-earth teacher, so much so that she prefers us calling her Gracie and will engage in conversations with the different group projects.”

He said he appreciates her methods of teaching and how she tries to accommodate her students’ learning styles.

“I enjoy that she is younger and understands how we perceive the information being presented,” said Lopez. “What I like most about her is that she is very outgoing and that goes hand-in-hand with the compassion she has in making sure students feel comfortable and willing to approach her for anything.”

In comparison to Lopez, sophomore Melusine Tenkoff recognized traits that she admires in her other teachers, such as being open to students’ individual and group ideas.

“I admire that Mrs. Mariner is using her teaching technique to not only show us the importance of knowing the content but also understanding and applying it to everyday life,” said Tenkoff, who is in fourth period Principles of Engineering – her second engineering class at Sunny Hills. “She has an extremely fun personality, and I personally enjoy that she is open-minded and ready to talk to us about the issues that are presented inside and outside the classroom.”

Knowing that one of Mariner’s aspirations is to inspire her female students to tackle the engineering field, Tenkoff believes that her teacher’s character is a major factor in accomplishing that goal.

“Her support for female students sets an overall confident aura,” she said. “I feel like it not only influences the girls in my class but also others because of the vibe she gives off.”

“Personally, having my own teacher be an advocate for female empowerment gives me the courage to take on challenges without thinking twice about how my gender will affect me.”

Besides Mariner’s extensive knowledge and a previous career in construction, fall semester principal Allen Whitten said he has confidence in Mariner’s effectiveness in the classroom.

“She does have a lot of experience in the industry as an engineer, so she’s very comfortable with all of our equipment,” Whitten said. “Just the fact that she’s a female, I’m excited about that [because] we’re always trying to get more girls involved in engineering, computer science and STEM classes.”

Outside of school, Mariner, a mother of six, can be found working on new projects, such as a ninja course in their backyard for her daughter, and working on fixing cars with her husband. She said she also spends time playing the guitar and tennis.

“I had boyfriends that worked on cars, classic cars from the 1940s,” she said. “I fell in love because the art, the ingenuity in making a car is fascinating how it runs and also the detail that goes into making a car.”

Mariner’s goals for this school year include recruiting more students for the Robotics team, growing the Skills USA Club and returning to past competitions once they are in person.

As a part of her goal to encourage more female students to pursue engineering, a club called Femmineers – which is designed to help girls understand that they can excel in a field that is predominantly male – and hopes to see some of her students follow through on getting the Associated Student Body to approve the club in the 2022-2023 school year.

It will be student-run with Mariner as the adviser but further details are unknown.

Her overall goal is to be more prepared and knowledgeable of the equipment and resources she has yet to learn about as the new EPIC coordinator at Sunny Hills.

“I think Mr. Zanone was one of the top dogs here and he has big shoes to fill,” Mariner said. “I didn’t that before but now I hope I can fill them just as good as he did or better. The goal is to grow EPIC out into six periods again.”