After a two-year winless drought against the Warriors, boys basketball soundly defeats Troy 63-47 in a Jan. 11 home rivalry game 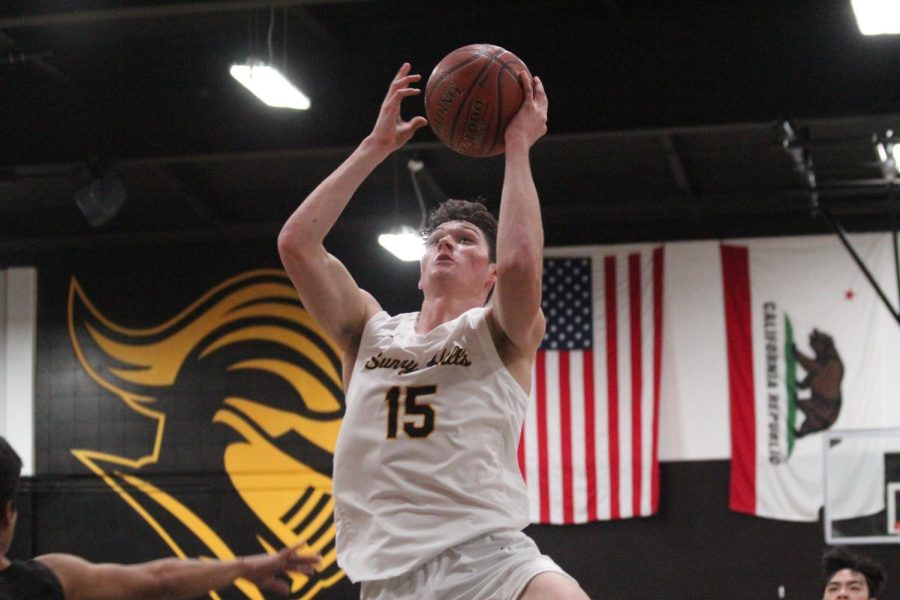 Forward senior Dylan Lawson gets set for a layup during the boys basketball team’s Jan. 11 rivalry home game against Troy High School. The Lancers’ leading scorer of the game and team captain, Lawson ended the evening with 35 points, 11 rebounds and five steals.

With the lead changing throughout the second and third quarters, the Sunny Hills boys basketball team pulled away from rival Troy in the last eight minutes of the Tuesday, Jan. 11, home game, finishing off the Warriors 63-47 – a 16-point margin.

“I think when we pressured them, it was a matter of time before we could make them turn the ball over,” boys basketball head coach Joe Ok said after the game. “Once we got [senior] Dylan [Lawson] inside, good things happened for us.”

Ok was referring to team captain Lawson, who ended the evening as the leading scorer for the Lancers (16-4, 2-0 in the Freeway League) with 35 points. The forward did most of the damage in the paint against the Warriors (4-16, 0-2 in the Freeway League), scoring 23 points in the first half, including the first two of the night.

“It definitely [feels] great to score the first points because it’s a league rivalry game against Troy, and it dictates on how the quarter will turn out,” Lawson said. “It’s just great to get the bench hyped up.”

Though the team gained a narrow two-point lead on the Warriors by the end of the first quarter, the opposition fought back with effective assists from sophomore point guard Terry Ahn to freshman forward Vander Ploog, who sank several three-pointers.

However, in the last three minutes before halftime, the Lancers regained their momentum with solid defense, finishing the first half with a three-point lead, 34-31.

“I think when the [second] quarter started, there [were some] nerves on both teams and that was one of the cases where we made a couple of small mistakes,” Ok said. “But we were able to not let that hurt us and the couple mistakes here and there weren’t big enough for [Troy] to take a huge lead on us.”

The third quarter started off stagnant with neither side gaining points until three minutes into the quarter when the Warriors were able to close in the score gap, evening the score at 39. With three minutes left in the quarter, Lawson showed his mettle in the paint, scoring on back-to-back two-point shots, increasing the Lancers’ lead to 45-41.

“I try not to use a bunch [of timeouts] if I don’t have to too early because I want to save those for end-of-the-game situations,” Ok said. “Calling the timeout slows everything down, and I can talk to the guys, instruct them and let them know we have to make adjustments.”

Coming out of the timeout with four minutes left in the final quarter, guard and team captain junior Johann Kwon’s two, clutch three-pointers and Lawson’s offensive and defensive rebounds extended the Lancers’ lead to as many as 20 points in the final quarter while holding the Warriors to only six points.

“I’m a shooter, so I go out there to do my thing — that’s my role,” Kwon said. “I know how important last minute shots are, especially in a game against Troy, so I’m glad I was able to hit those for my team.”

The team hopes to continue its seven-game winning streak at its home Senior Night game against Sonora (9-7, 0-1 in the Freeway League) on Friday, Jan. 14, at 7:30 p.m.

“We’re going to enjoy this win because it’s always fun to beat Troy with the big rivalry going back and forth,” Ok said. “We need to get ready so we can come out here and hopefully do it again on Friday night.”