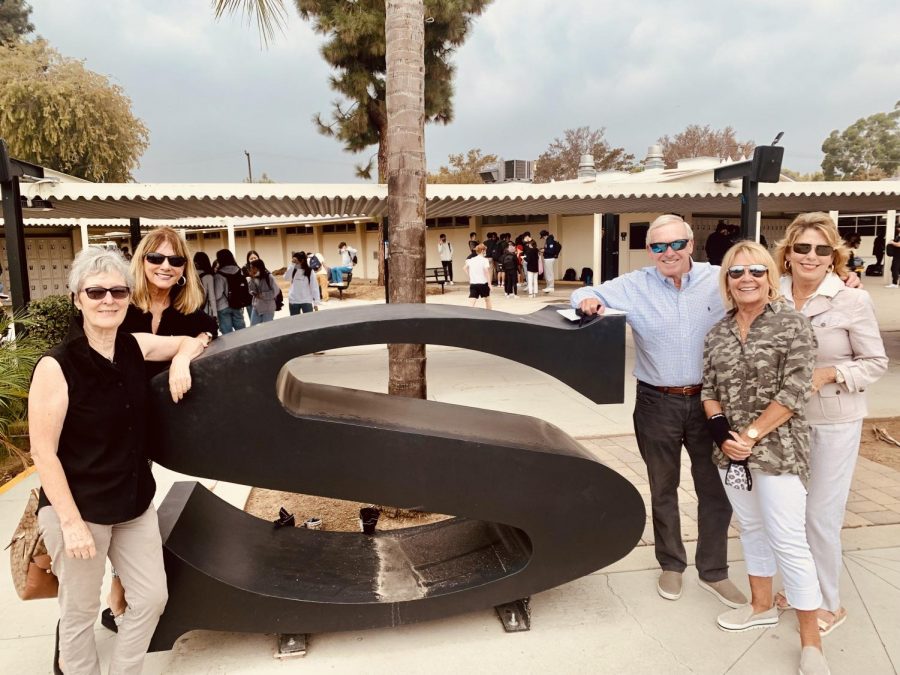 Some Class of 1968 members return to their alma mater to check out the modernized look of the campus, including the giant “S” and “H” in the center of the quad stage. The group of five alumni plan to host a fundraiser starting on Dec. 1 with the hopes of donating benches for students around the campus.

The Class of 1968’s reunion committee decided to organize a fundraiser from Dec. 1-July 9 with all proceeds going to Sunny Hills for school officials to spend on campus needs, said some of its members who toured here last month.

“The campus tour for our reunion committee conducted by principal [Allen] Whitten re-enforced our commitment to give back to the school that gave us such a solid foundation for our future,” said Brad Rawlins, chairman of the Class of 1968’s nine-member reunion committee. “As our class is now rounding the third base of life, we wanted to give something back to the school that meant so much to us.”

Rawlins was referring to the Oct. 6 visit by five reunion committee members whom Whitten served as tour guide, showing them not only the campus grounds, but also classrooms of various subjects ranging from science to engineering to dance.

Before the tour, the committee had already agreed this past summer to reach out to about 200 classmates via email, informing them of the opportunity to write a check as a donation to give back to the school that they graduated from, Rawlins said.

Though he and his fellow visitors were especially impressed with the eSports team which was not available during his high school years, they agreed to let Whitten decide what to do with the money.

“We asked [principal Allen Whitten] what specific capital improvements were in need, and he suggested benches, picnic or lunch tables and perhaps shade structures with charging stations for small electronic devices,” Rawlins said. “We will defer to principal Whitten to invest the donation in a manner that best serves the current needs of the school.”

Whitten said he first got Rawlins’ request for a campus tour on Sept. 15 and within 20 minutes, Rawlins said Whitten had responded, stating in the email back to Rawlins that he and his committee would be blown away by the look and feel of the campus and its programs.

“When we looked around the campus, they really liked the new black and gold benches we had, and they could see there could be a need for more of those around campus,” he said. “We try to find areas where kids are hanging out, and there are no benches in the area or areas where students are sitting on the ground.

“That is how we have installed all the benches and tables.”

Though previous Class of 1968 reunions never included a fundraiser like this before, Rawlins said he hopes this effort will inspire other classes to follow suit.

During his tour, Rawlins said he was amazed to see what was happening on campus with its diverse curriculum and focused students who were all well-behaved and respectful.

“There is a reason that students attend Sunny Hills High School from all over the school district,” he said. “Principal Whitten should be congratulated for his successful leadership and passion for the growth of all students at Sunny Hills.

“Sunny Hills High School is a school we will always be proud of and thankful for.”

If anyone’s interested in the Class of 1968’s fundraising campaign to give back to Sunny Hills, contact Brad Rawlins at [email protected]