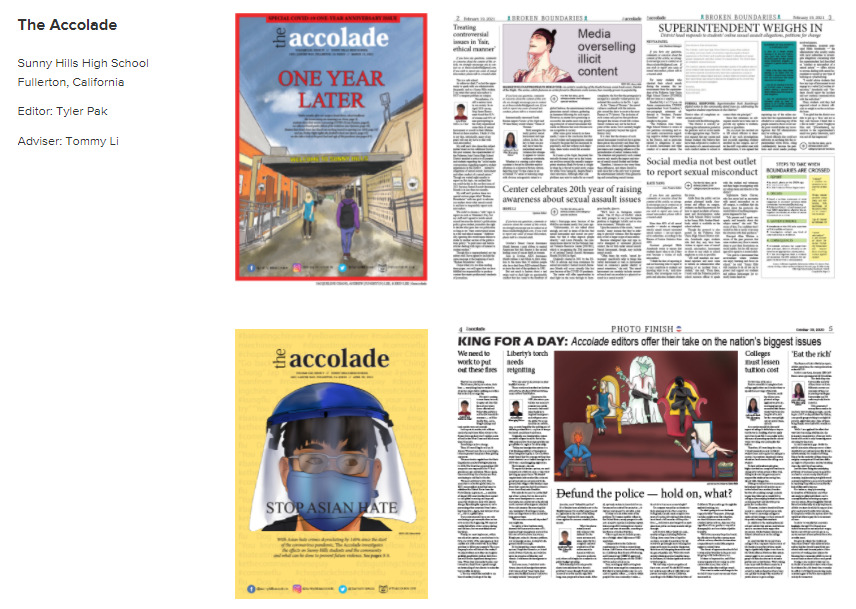 A screenshot of the National Scholastic Press Association's list of high school newspaper Pacemaker finalists with the first one representing California journalism programs being Sunny Hills' The Accolade.

For the first time since 2013, The Accolade has been named a national Pacemaker award finalist based on issues evaluated from the 2020-2021 school year.

“This particular recognition has eluded us for awhile now, so I was very excited when I saw The Accolade listed among the other perennial finalists,” said English and journalism teacher Tommy Li, who returned to advise the journalism program in 2016 after taking a break from it in 2008 to help take care of his family. “We definitely would not have reached this level without my dedicated editors and staffers from the last school year and advice and feedback from other journalism advisers and media professionals I know.

“I’m sure being a finalist could also benefit our staff as well as they’ll be able to add that honor on their college resumes and hopefully enhance their chances of getting into their dream schools.”

Sponsored by the National Scholastic Press Association [NSPA], the Pacemaker finalist announcement was broadcast via a live webinar Oct. 21 followed by a news release and showcase of the finalists’ judged works on the NSPA website.

“The Pacemaker is the association’s preeminent award,” NSPA executive director Laura Widmer said in the statement. “NSPA is honored to recognize the best of the best.”

The 2020-2021 Accolade editor-in-chief, Tyler Pak, said it was comforting to know that he and his staff are among such prestigious company.

“I was shocked and super excited when I received Mr. Li’s email,” Pak said. “We’ve proved that we’re one of the top high school newspapers in the country.”

The finalists appeared in alphabetical order based on what state they were from; California ended up being the first state as the earliest list on the alphabet, and for some reason the NSPA web designers chose The Accolade to lead the list of other finalists from the same state.

“Overall, I think with these two issues, the main things that were appealing to judges was the fact that these were issues that were really relevant and impacted a large majority, if not the entire majority of our school population,” said Elijah Jhee, last school year’s Accolade managing editor.

Likewise, Pak acknowledged that The Accolade’s showcasing unique high school perspectives was the ticket to becoming a finalist.

“One of the things we tried to work on last year was covering more meaningful topics,” he said. “We covered larger, more important topics to spark a conversation within our community.

“It was a big change and perhaps a conversational one, but I believe it was an important step for our publication to take and one that I was excited to make.”

Of the 57 newspapers and news magazines recognized, only 11 were from California with The Accolade being the lone Orange County representative and one of three other Southern California journalism publications to receive the honor.

Being a finalist earns the program a 10-inch-tall, eight-inch wide wooden plaque with a certificate sealed by a sheet of glass.

The NSPA plans to hold a virtual awards ceremony Nov. 13 to reveal which programs will be among the 28 in the newspapers, newsmagazines and specialty magazines categories to earn a Pacemaker award, a much bigger plaque at 13 inches in height and 10.75 inches in width.

Before earning finalist recognition this year, The Accolade program has earned three finalist plaques and a Pacemaker one – awarded in 2005 for issues produced during the 2004-05 school year.

Pak said the last school year was a challenge because he and his editors had to work on PDF issues after school and with a limited number of staffers who can be in a classroom because of COVID-19 health and safety protocols.

So it made it even more special that the staff’s efforts were recognized through this annual Pacemaker awards program, he said.

“The pandemic made simple tasks like communicating with the staff, interviewing sources and meeting in person 10 times more complicated,” Pak said. “Still, we persevered and produced award-winning work.”

“With the pandemic impacting schools across the country, many of the papers and magazines submitted for the competition were produced with student journalists working under very challenging situations,” Lundgren said.  “The high-quality journalism these publications provided, against all odds, is remarkable.”

When notified of the result through Pak and 2020-2021 Accolade web editor-in-chief Andrew Ngo’s text, Jhee said he was not greatly surprised about the recognition but felt his confidence rise.

“We have a legacy of winning awards, and I really think this was not something we necessarily expected but what we definitely shot for,” he said. “The fact that this popped up was not really surprising, but it’s really nice obviously to have a sense of affirmation.

“It’s good to know that some judges out there recognize the work we put in.”

Having been part of The Accolade for three years and earning several awards in addition to this year’s Pacemaker finalist, Pak said he hopes that The Accolade’s success continues for years to come.

“My goal last year was to continue The Accolade’s tradition of excellence,” said Pak, who plans to tune into the virtual awards ceremony next month. “Although covering larger topics may present more challenges, it’s important to continue covering them. Stand up for yourselves, keep your standards high — no matter how tedious it may be — and work hard.”