Sunny Hills football triumphs in the ‘Battle of the Nations,’ 22-20 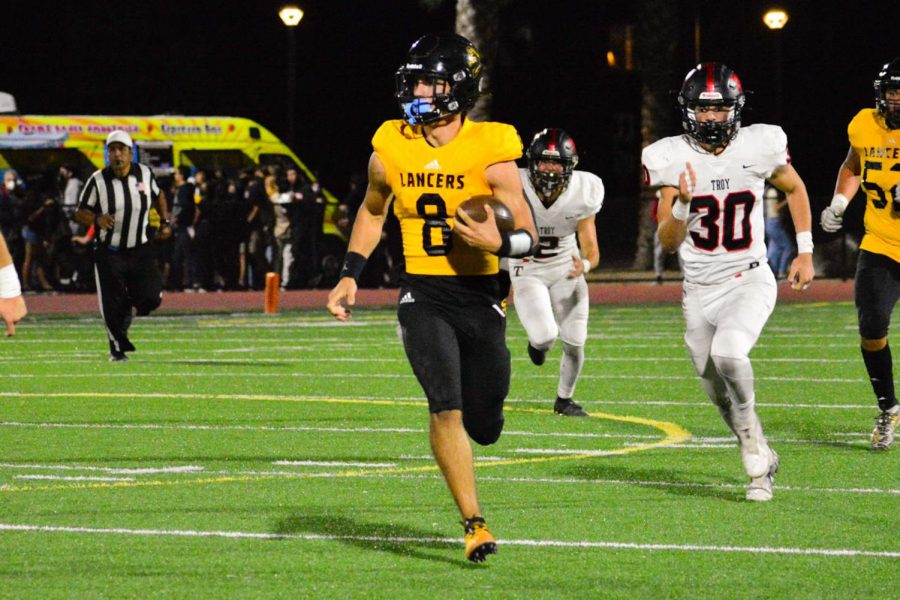 Quarterback senior Max Spero runs to avoid getting tackled during the third quarter of the Oct. 15 game against the Troy Warriors at Buena Park High School Stadium. The Lancers, who were playing in their homecoming game, came away with a 22-20 win that had all the makings of a rivalry affair, especially in a wild two minutes.

The spectators, clad in black and yellow, swarmed among each other in the student section of the bleachers, cheering as the scoreboard read 22-20, which signified the end of the Friday, Oct. 15, football game between Sunny Hills (2-1) and Troy (2-1).

In this first-ever rivalry battle hosted by both schools’ ASBs with a shield as a prize for the winning team, also known as the Battle of the Nations, Sunny Hills took home the coveted silver crest for the first time in history.

The Warriors opened the game with two back-to-back touchdowns — the first scored 5:46 into the first quarter on a touchdown run and the second came with 10 seconds remaining before halftime with another touchdown run.

Though the Lancers were shut out in the first half, they made much-needed adjustments in the second half with the help of key players like quarterback senior Max Spero and running back senior Nick Wilde.

Though Sunny Hills started the second half on offense, the Warrior defense continued to dominate, forcing the Lancers to punt the ball away to Troy’s offense.

But with 8:42 left in the third quarter, the Lancer defense came through, forcing a turnover when Troy junior quarterback Ryan Maturo fumbled the ball at the 18-yard line.

“Once I recovered the fumble, I was extremely excited because it meant our offense would get great field positioning and the opportunity to put points on the board,” said linebacker junior Tony Salas, who recovered the fumble. “… I think the fumble and touchdown switched the momentum of the game and motivated our team.”

Two minutes later, the Lancers were on the scoreboard on a nine-yard Spero touchdown pass to senior wide receiver Dylan Lawson, who pulled the ball in while staying inbounds in the back of the end zone and being tightly covered.

“At halftime, we said ‘we’ve been in this position before — we’re all right; we’re ready to go,’” Karavedas said after the game. “We came down and scored, and all of a sudden it was a brand new ball game. I’m so proud of our kids for their resolve, their resilience, their toughness.”

After forcing the Warriors to punt the ball back to Sunny Hills, the Lancers scored again at the 4:26 mark of the third quarter. This time, Spero did all the damage as he took a quarterback keeper and ran past the Warriors’ defense on a 60-yard touchdown run.

“When I first started the play, all I was thinking about was getting the first down,” Spero said. “After I got the first down and saw a bunch of green grass and no defenders, I just thought to myself ‘don’t get caught,’ and kept running until I was in the end zone.”

With a chance to catch the Warriors at 14-13, Sunny Hills kicker junior Mathias Brown, who was in his first full game back from an injury, failed on his extra-point try, leaving the Lancers down by one point.

Shortly after on the ensuing possession, Wilde – who was playing defensive back– tackled the Warriors’ receiver at the 1-yard line after he had caught a screen pass, saving a sure touchdown run.

Paired with a penalty against Troy, the Lancers took over possession of the ball with 1:14 remaining in the third quarter.

“[I was motivated] just by the fact that this is our city,” Wilde said. “My senior class has never lost a game, and we were only down 14-0, and we knew we could score 14 in the second half easily, so it was just like a playoff game.”

Around four minutes into the final quarter at the 8:26 mark, Brown kicked a 27-yard field goal and gave the Lancers their first lead of the game at 16-14 – a lead that Sunny Hills would build up with a touchdown by running back junior David Mahood with 1:37 left in the game.

However, Brown added the first series of drama to what usually happens in rivalry games when he missed his second extra-point attempt of the evening (the kick was blocked by Troy’s special teams’ players), allowing the Warriors to stay in the game behind by only eight points at 22-14.

That’s when several wild plays occurred to end the game.

The Warriors found a way to score another touchdown quickly when Troy’s quarterback, junior Ryan Maturo, tossed a 33-yard reception to Aiden Corrales with 63 seconds left in the game.

That score prompted many of the Troy fans who had come down from the visiting stands to run back and return to the bleachers to see if their team could tie the game on a two-point conversion attempt.

The effort failed when a wide-open Troy receiver fell to the ground and was unable to make it to the end zone after catching the pass from Maturo. While the fans in the Sunny Hills side of the stadium erupted in cheers, the visitors started leaving again.

And once again, momentum swung back in the Warriors’ favor when they recovered an onside kick with under a minute to go. All Troy needed to do was score either a touchdown or a field goal while running out the clock, and the Warriors would steal the victory away from the Lancers.

On Troy’s first offensive series, Mahood – this time playing on defense as defensive back – came through for the Lancers once more when he intercepted Maturo’s pass.

With 45 seconds left on third and eight, running back senior Chris Pinawin ran enough yards to give the Lancers a fresh set of downs. Spero then took a knee in victory formation to end the game.

“At the end of the game, the mistake we made could’ve come back to bite us, so we spent some extra time in practice this week to make some changes,” said Karavedas, who practiced with the team to ensure PAT’s are scored in upcoming games.”

And ironically, the best reaction to the wild night came from a Sunny Hills player with a similar name to describe the last few series of the game:

With a two-game winning streak, the Lancers will work on keeping its second-place standing in the Freeway League when they take on Sonora High School at another home affair Friday, Oct. 22, at 7 p.m.

“It’s senior night, so we have to go out for our seniors next week,” Mahood said. “Sonora fights hard, so we’ve got another one for us — we’re just going to go in and do what we do best.”