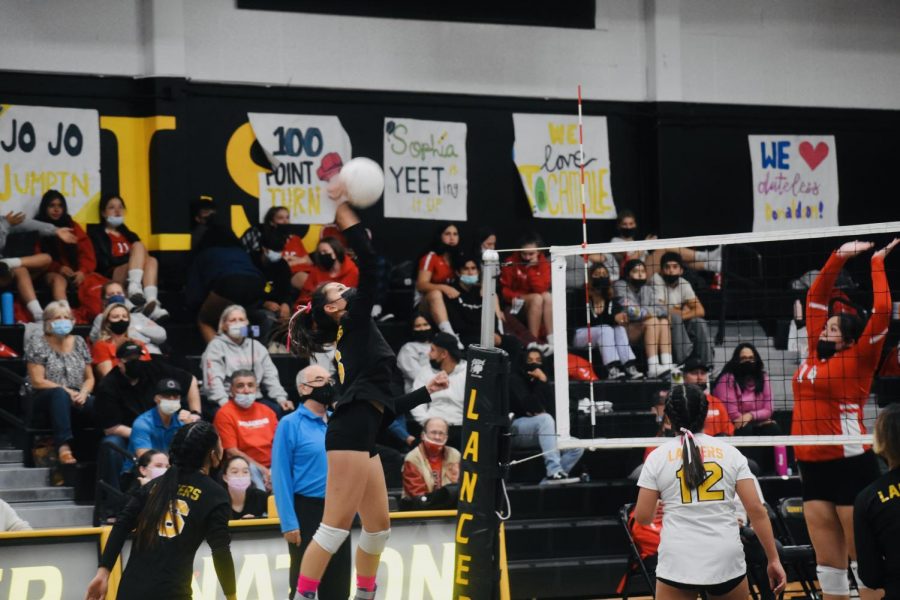 Outside hitter sophomore Kayla Taylor spikes the ball to score a point against Fullerton Oct.13 in the Sunny Hills gym. Although the Lady Lancers prevailed in their last Freeway League match of the season, they were unable to qualify for CIF playoffs.

The Sunny Hills girls volleyball team won its final match of the season against the Fullerton Tribe (3-7) Oct. 13, at home, finishing fourth in the Freeway League with an overall 5-5 record.

“We were super motivated to beat Fullerton since it took us five [sets] to beat them last time,” outside hitter sophomore Kayla Taylor said after the straight-set sweep of the Tribe with scores of 25-19, 25-18 and 25-19. “We really wanted to win, especially since it was senior night.”

“Of course it’s a goal to get to CIF, and we unfortunately did not … but either way I’m proud of the group,” girls volleyball head coach Amanda Donaldson said. “Tonight was one of the first times in league when we were able to crush the opposing team in three [sets], especially since it was against Fullerton, who took us to five last time.”

Taylor, who is also the team captain, plans to return next season in which she hopes the team will improve its chances to earn a CIF playoff spot.

“It was a tough season, but I think we finished strong, and we are all really happy, but it’s bittersweet,” she said. “I am very glad that we were able to play and win for our seniors. We’re losing all of our seniors, but next year hopefully we’ll make up for it with new players as well.”

Though it was a straight-set victory, the Tribe, which finished fifth in the Freeway League standings, put up a fight throughout the evening.

The first set began with Sunny Hills scoring the first point through a serve miss from Fullerton middle blocker Zoe Kamizolas. The set started off close with both teams scoring an even amount of points until middle blocker sophomore Noor Francisco changed the momentum in Sunny Hills’ favor with two consecutive kills, making the score 15-13.

“We’ve been working on our defense every day and how to hit different locations with our hitters,” Kim said. “I think we were able to win the first set because of our consistency.”

The coach said she felt her players were better prepared for the Tribe this second time around.

“The nice thing about playing teams twice is that we have an idea on what the other team does so we’re able to watch film and practice,” Donaldson said. “I feel like we did a good job adjusting to what Fullerton is good at and for us, being consistent on where they’re not on the court to win the set.”

Sunny Hills prevailed in the second set, jumping to a 19-6 advantage. But the Lady Lancers struggled against Fullerton’s offense, which allowed the Tribe to close its deficit gap to 21-16. The coach then called a timeout soon after to ease the pace and develop momentum during the remainder of the set.

“We weren’t passing the ball well to be able to run our offense and keep it in system and that was what our big timeout was about,” Donaldson said. “I told my team that we have to be able to pass and hold our platforms, like the drills we do at practice, and side out.

“We got the next point right after the timeout, so that was a good adjustment by the girls.”

Kim scored off four kills along with her consistent sets, which tipped the second set in the Lady Lancers’ favor, ending it at 25-18.

The Lady Lancers opted for a dynamic offense in the final set with a lot of different options to play the ball, Donaldson said. With solid defense from outside hitter senior Jocelyn Penaloza and five kills from Kim, Sunny Hills ended the set at 25-19.

“We managed to win the third and final set by finding open spots on the court, and I was able to read their offensive hitters and play good offense today,” Penaloza said.

With the season coming to an end, the coach remains grateful for her time with the Class of 2022 throughout the coronavirus pandemic.

“It’s incredibly sad to think that it’s over, and we’re not ever going to be having the same group of girls at practice,” Donaldson said. “We have a really tight bond as a group, as we’ve been through a lot with COVID-19 and [dealt with] many ups and downs, but we’re excited for the graduates and congratulate them on the next step of their journey.”