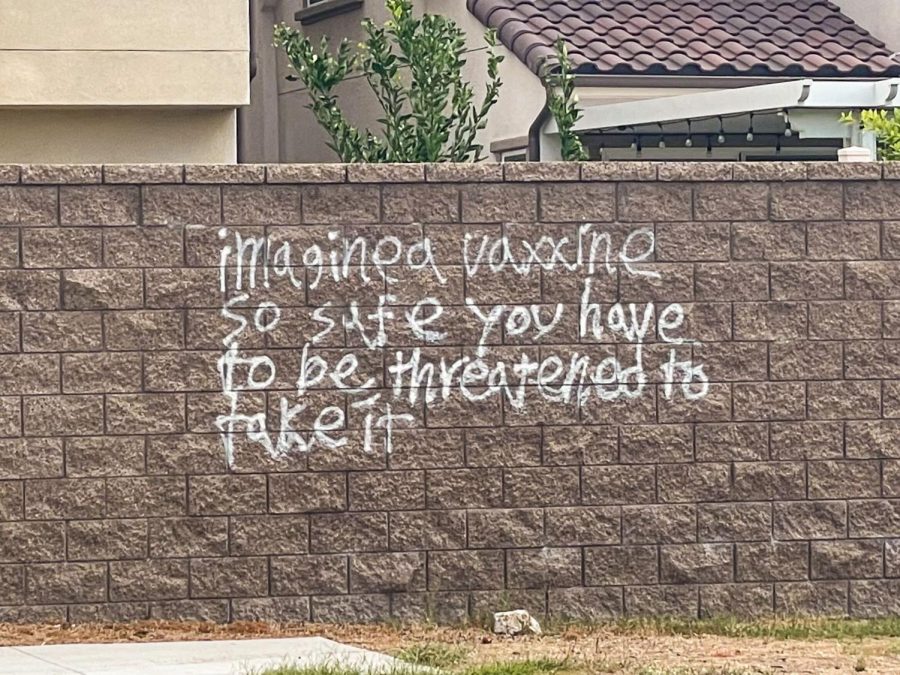 This spray-painted message appears to be a reaction to the Friday, Oct. 1, statewide mandate from California Gov. Gavin Newsom that requires students 12 and older in public and private schools to be fully vaccinated by as soon as January 2022. Students and motorists who use the path that leads to the back of Target at Fullerton Town Center discovered the graffiti on a wall between Friday, Oct. 1, and Monday, Oct. 4 – about a mile away from one of the entrances to Sunny Hills. By after school Wednesday, Oct. 6, the message was wiped away.

While the Fullerton Joint Union High School District [FJUHSD] opted not to follow the Los Angeles Unified School District’s [LAUSD] recent decision to issue a COVID-19 vaccination mandate for all of its students, FJUHSD officials will now have to abide by one issued statewide last week for all public and private schools.

“The governor [Gavin Newsom] directed the California Department of Public Health to follow the procedures established by the legislature to add the COVID-19 vaccine to other vaccinations required for in-person school attendance such as measles, mumps and rubella, pursuant to the Health and Safety Code,” wrote FJUHSD superintendent Steve McLaughlin in a Friday afternoon, Oct. 1, email shortly after Newsom had announced the mandate.

The age group that will be impacted first will be those from 12 and higher; they will have to show proof of COVID-19 vaccination by as early as Jan. 1 or July 1, 2022, depending on how soon the U.S. Food and Drug Administration [FDA] authorizes the vaccine for that age group, according to McLaughlin’s emailed letter.

“The Governor stated that exemptions for medical and/or religious and personal beliefs would apply” for students whose parents prefer that their children not get vaccinated, the superintendent added near the end of his correspondence.

Though McLaughlin didn’t go into details about how parents would go about with applying for the exemption, an Oct. 1 Los Angeles Times article described this likely procedure:

“Under the governor’s order, unvaccinated students whose parents don’t submit either a medical or personal belief exemption will have the option of enrolling in a fully online school, attending independent-study programs offered by school districts or being homeschooled,” according to the article. “It will be up to schools and school districts to enforce the mandate, as they do with other required vaccines, including those for hepatitis B, tetanus, mumps, measles, polio and chickenpox.”

Student, parent and teacher reaction to Newsom’s mandate remained supportive, though some students told The Accolade they did not read the superintendent’s email and were not aware of the governor’s order.

“I think that the governor made a difficult decision since many might be against this mandate, but he did it for the children’s sake,” said freshman Joyce Choi, who received the Pfizer vaccine in June. “Since school children are surrounded by hundreds of people a day and are working in a public environment, I do think that the COVID-19 vaccine is required.”

Choi’s mother, Lauren, also approved of the governor’s latest statewide order – the first one of its kind in the nation.

“I think this mandate will make it so that school life will be safer,” Lauren Choi said. “I will also be at ease since it will be less likely that my daughter will be exposed to COVID-19.”

The COVID-19 vaccination requirement comes on the heels of a similar mandate that the LAUSD school board approved Sept. 9; however, that one impacted all the students in the district, not just those ages 12 and higher, according to another L.A. Times article.

“I did not see the superintendent’s email because I do not usually check my inbox,” said sophomore Camille Timbol, who received the Pfizer vaccine in June. “I approve of the mandate because attending school with hundreds of other students puts everyone at risk for COVID-19, so the least we can do is get vaccinated and wear a mask.”

Although science teacher Andrew Colomac, who received the Moderna vaccine in March, stands behind the science related to the prevention of COVID-19’s spread, he had mixed emotions about forcing those younger than 12 to get such a shot.

“I think the vaccine is important, but I also am fearful of giving these to kids, especially young kids,” Colomac said. “The vaccine rests easier on the mind for older, high school children, but when you start pushing them into, say, kindergarteners, they are children, and it is different.

“It is a little scary, and I’d like to see more research on it before they push something like that.”

Junior Jacob Dedeaux believes the new mandate violates individual rights but still feels it is necessary since vaccines for measles, flu and other diseases have been made mandatory for school enrollment.

“I personally believe in vaccination being a choice for all individuals and, as written in our Constitution, that we should not be judged or discriminated against for our choices,” said Dedeaux, who received the Pfizer vaccine in early June. “I am very much supportive of people getting vaccinated, but I always respect someone’s choice of not getting vaccinated and do not try to influence anything they are interested in doing.”

The junior is also concerned that anti-vaxxers could misinterpret the intent behind the governor’s actions, referring to graffiti spray-painted on a wall two miles from campus that was discovered shortly after news of the mandate was released. By Wednesday, Oct. 6, the message was washed off.

“I think the graffiti was a direct response to the mandate, and I think most non-vaccinators would not be happy or rather [be] angered by what seems like a targeted response to the Americans who are still not vaccinated today,” Dedeaux said.

Senior Noah Eastman stayed neutral about whether he should receive vaccines or not but mostly worries about the side effects of the Pfizer or Moderna shots.

“I think vaccinations are now necessary now that the Delta variant is going around,” said Eastman, who plans on getting vaccinated in November or December. “I’m in the middle for the vaccine — for and against — but somewhat leaning for them.”