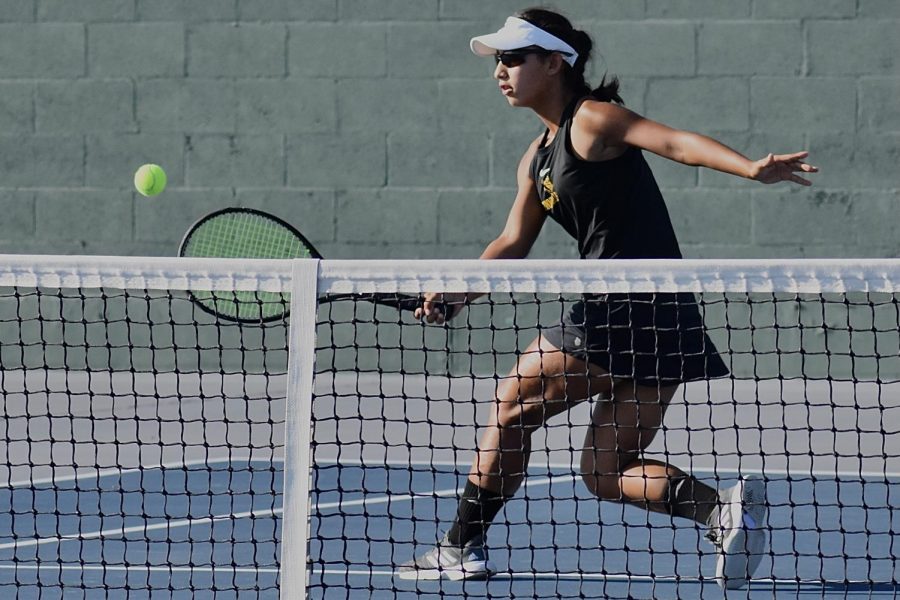 Freshman Daniela Borruel hits a forehand volley at a Sept. 10 pre-season game against El Dorado at the Sunny Hills courts.

Last season: The Lady Lancers ended the COVID-19-condensed season with a 3-2 Freeway League record and tied for second place in the league with the Fullerton Indians. The team ended 8-6 overall and advanced to the second round in CIF before getting knocked off by the Archer School for Girls in Los Angeles.

Last season, many players sustained injuries, backed out from returning because of COVID-19 or got sick after receiving their second dose of the coronavirus vaccine, which resulted in a shortage of players for a complete lineup.

Outlook: With strong underclassman singles players and a solid doubles lineup composed of returning seniors, the Lady Lancers hope to take the Freeway League title after many years and advance further into the CIF playoffs this season.

“I expect our team to do very well in the [Freeway League], and we should be able to dethrone Troy after many years,” Ghareebo said. ”We have some very talented girls on our varsity team, and I expect us to work hard.”

As co-captain with Natalija Glavy, senior Carolyn Tran aspires to create a welcoming environment for the underclassmen where all players socialize with each other rather than in cliques.

“During my freshman year, the seniors definitely made us feel welcome, so I want to do the same for everyone who didn’t get to be on a real tennis team,” Tran said. “I want to make sure that we’re not a team just on the court but off the court as well.”

Tran mentioned that the addition of freshman Daniela Borruel, who is ranked fourth in the nation for her age group and second in California, will help the team advance far into CIF this season.

“[Borruel] really sets our team up so that we have a huge advantage in the league,” she said. “Not just Daniela, but the whole team is working hard and showing up every day to be the best we can be. As a Division 3 team, we’re set for this year, and I believe we’re going to go really far in CIF.”

Borruel said she enjoys the team’s atmosphere despite being surrounded by many upperclassmen.

“From the very first moment I met up with the team, I was comfortable around them, and there was a lot of kindness,” she said. “My goals for this year would be to take the team very far into the competitions this year and to also make sure that each one of us is very committed.”

Although her teammates and coach have high hopes for Borruel to lead the team in matches, she does not feel overwhelming pressure.

“Handling pressure is something that I have been working on,” she said. “I tend to use certain types of skills when I am in need of confidence, such as reflecting over past victorious moments.”

Ghareebo said he expects Borruel to dominate her Freeway League matches, especially since she has already won all 12 of her preseason matches.

“There are very few girls that can match her talent level in California and even the nation, so I expect a lot of great things from her,” he said.

The girls tennis team will play its first home Freeway League match on Tuesday, Sept. 21, against the La Habra Highlanders at 3 p.m.