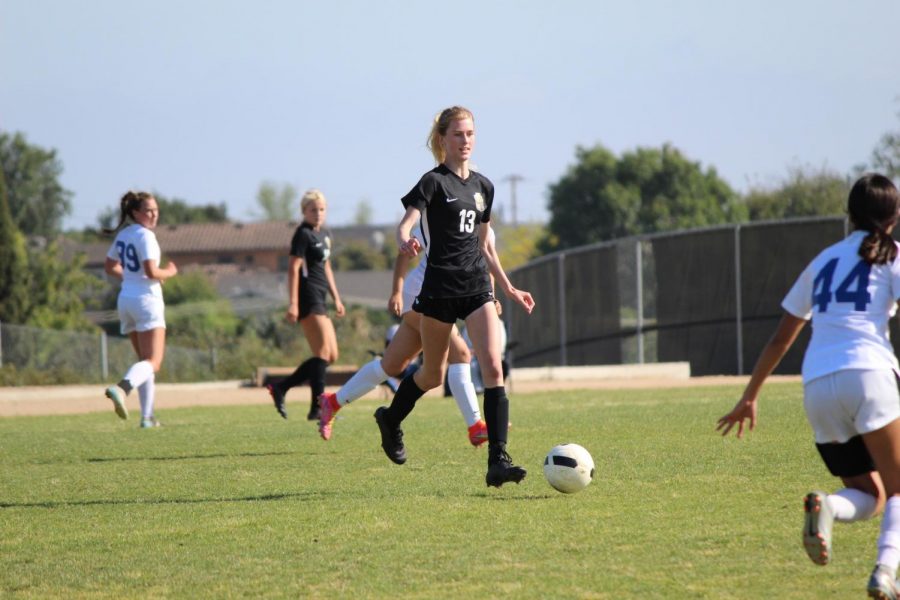 Defender senior Anika Osborne in an April 20 home game against La Habra. Osborne has made a verbal commitment to play for the girls soccer team at the University of California, Irvine.

Her mom, Christina Osborne, played soccer as a defender for Sunny Hills from 1982-1984. Christina Osborne — along with her older brother, Jaron, also an SH alumnus — introduced Anika Osborne to the sport and by the time she was 6 years old, she was already playing club soccer for the Rangers in Fullerton.

“They pulled her from [the recreation] level and asked her if she wanted to play club, and we didn’t know what that was,” the mother said. “She loved running around even more than the boys did, so she played, and she learned how to win and how to lose well and with self-esteem regardless.”

More than a decade later, her daughter has accomplished another feat that neither of her older family members have ever done.

Anika Osborne verbally committed over the summer to play for the girls soccer team at the University of California, Irvine [UCI], becoming the first athlete in her family to eventually play for an NCAA Division I soccer program once she officially signs her letter of intent in November.

“I was super excited and accepted it,” the girls soccer player said. “I was also scared at the same time, so kind of all emotions were going through.”

Other than UCI, the senior said she had received college offers from Utah State and California State University, Fullerton. But what drew her to playing for the Anteaters, who have a 1-2 record in their 38th season as of Thursday, was what they had to offer for the major she wants to pursue.

“UCI has been a dream school of mine ever since I was younger and just the way it leads to medical programs for other opportunities made me finalize my decision,” she said.

Girls soccer head coach Jeff Gordon praised his athlete for her versatility on the field.

“Anika is a rarity in that she is both an amazing defender and forward as well,” Gordon said. “She can play anywhere on the field and dominate.”

Getting a scholarship offer from any college also means a lot, he said.

“A UCI soccer scholarship means that you are not only a great soccer player, but also a great student,” Gordon said. “This is our second player [under Gordon’s coaching] to sign with UCI.”

Heading into her second year on the team after she had transferred from Rosary Academy in Fullerton in her sophomore year, Anika Osborne celebrated with her teammates in 2020 when they won the Freeway League title, going undefeated.

“It was very exciting to be Freeway League champions last year after being in a dry spell in the league,” Anika Osborne said. “This year for CIF, we plan to carry that same determined attitude but hoping that all of our hard work will come out with a better outcome.”