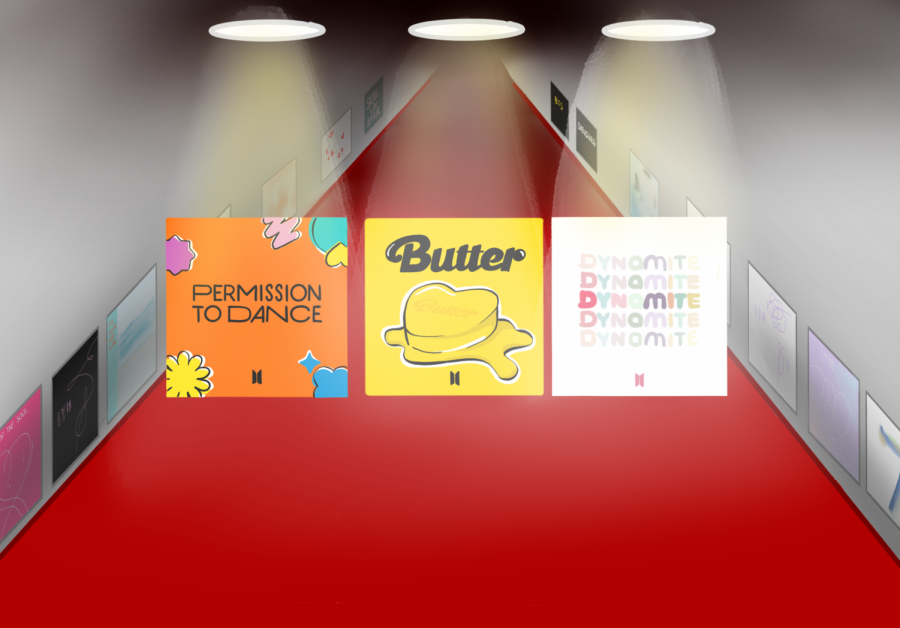 BTS' English releases, "Permission to Dance," "Butter" and "Dynamite," all received a lot of spotlight as the group becomes a global sensation.

When “Dynamite,” the first BTS song completely in English, came out on Aug. 21, 2020, I remember initially thinking that this was an amazing way for BTS to publicize itself to wider audiences beyond just South Korea. The Asian pop band broke records with this new track as it became No. 1 on the Billboard Hot 100 on Sept. 5, 2020.

However, the release of more English only singles like “Butter,” which came out on May 21 this year, and “Permission to Dance,” released July 9 this past summer, had me questioning the K-pop band’s sudden shift in language choice.

Varying opinions on this topic arose as some of BTS’ fans, known as the ARMY, have referred to the band as becoming “too Westernized,” while others have seen this as a beneficial marketing technique for BTS to cater to an international audience.

I started asking some of the ARMY fans here at school about what they think, and this response was similar to the majority that I had heard:

“I agree that their more recent songs are becoming more Westernized because, before this year, they mainly released songs in Korean,” said Neona Suthanurak, who has been a big BTS fan since 2016 as she has attended two concerts and own five albums.  “I’ve also noticed that it was only until this year that their more recent and fully English songs charted more than their previous Korean songs, so that could be a reason why they keep releasing English songs.”

I believe the English only lyrics definitely have an influence on the band members’ “Westernization,” but the music itself is also a factor that needs to be addressed.

Korean lyrics bring something new to the table for international fans to interpret and analyze. However, English only lyrics blend in with normal Western pop culture songs and lose the aspect of analysis many fans enjoyed when the songs were in Korean.

BTS debuted as a Korean hip-hop focused group but slowly changed its music genre to mainstream pop, which makes fans like me believe the band’s music is becoming too generic. Although I’m glad that BTS is getting more recognition on an international level, that has come at the price of losing the band’s distinctive sound. Other K-pop groups are not suddenly producing music in full English, so BTS should not as well.

I would like to see them revisit their approach to such classics like “Run,” released on Aug. 1, 2015, and “I Need U,” released on April 29, 2015.  Since BTS is a Korean pop group, the band has brought something new to foreigners, especially because no other Asian group has ever been this big. However, since band members are targeting a broader audience, their music blends into the normal pop music in Western society.

Their performances lately have also leaned toward Western pop culture as they do not dance like the Korean hip-hop style like they used to. It’s a pity that their style of dancing and performing changed with their shift to English language lyrics as well. For example, BTS debuted with the song, “No More Dream,” on June 12, 2013, which showcased the group’s Korean hip-hop style through its dark clothing and difficult choreography. Now, it blends right into pop culture with the band’s bright clothing and less difficult choreography, as seen in such songs as “Butter” and “Dynamite.”

I still plan on supporting BTS; however, I will not actively listen to its music. Its newer songs are still very catchy and nice to listen to, but I prefer the BTS classics – these are the ones that brought something new to foreign fans to interpret and experience. Therefore, I will listen to BTS’ old songs and only occasionally listen to any new ones unless the band makes an about face again.