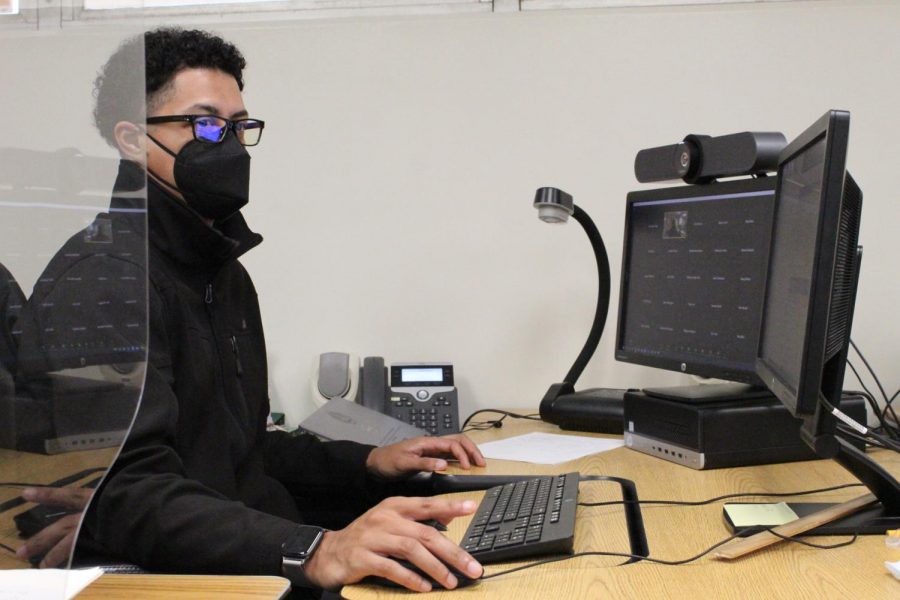 Math teacher Darius Durham, who was hired shortly after the spring semester started, sits at his desk in Room 97 to get ready to instruct his first period Pre-calculus class on May 18. Durham is one of four new full-time additions to the Sunny Hills faculty for the 2020-2021 school year.

For new math instructor Darius Durham, before he decided to join the teaching profession, things just weren’t adding up for him – literally.

After graduating from the University of California, Berkeley, in 2014 with his bachelor’s degree in accounting and San Diego State University in 2015 with his master’s degree in the same subject, Durham landed a job as an accountant at Klynveld Peat Marwick Goerdeler International Limited in San Diego, later switching to MBK Real Estate in Irvine.

“I did not like sitting in a cubicle all day and always having to be [dressed] in business casual,” Durham said. “So I started coaching basketball at Garden Grove High School as the junior varsity coach. I really liked it, but it was too stressful on my schedule.”

After searching for solutions to continue his interactions with students while still maintaining a well-balanced schedule, he decided in 2019 to earn his teaching credential through an online program called Alliant University, which offers an eight-week intensive course.

“It was a lot of work, but it was worth it,” Durham said. “The main challenge [was] being tired a lot. Once you get through it, it is so much more rewarding to have earned things through hard work.”

He then continued the hard work as a long-term substitute teacher at Westminster High School before getting hired last year at La Quinta High School to teach Pre-calculus and Advanced Via Individual Determination.

At the beginning of the spring semester Feb. 1, Durham switched schools again – this time here at Sunny Hills to teach Pre-calculus and Algebra Foundations II, taking over for Teri Klein after she had retired at the end of the fall semester.

While teaching two Pre-calculus and three Algebra Foundations II classes, Durham found that distance learning does not suit his usual upbeat self and desire for engagement with his students.

“Usually under normal circumstances, the class is super interactive,” he said. “So it has been a real big change for me. To me, interactions are my strong point, so that has been a tough transition.”

Prior to the coronavirus pandemic when Durham worked at Westminster High School, he shared a “Quote of the Day” with his students, and that’s something he incorporated with his Sunny Hills students – those coming for in-person instruction as well as those who choose to learn from home.

“Usually, whenever I start at a new school, it’s weird,” Durham said. “But, as time goes on, the students start looking forward to it and asking, ‘What’s the Quote of the Day?’ Sometimes I will even have people ask if they can come up with a quote for the day.”

Some recent ones that have been motivating range from “Some people want it to happen, some wish it could happen, others make it happen” from Michael Jordan to Aristotle’s quote “We are what we repeatedly do. Excellence, then, is not an art, but a habit.” He discovered these two quotes on Google and usually scours through the search engine regularly looking for words of inspiration.

Students such as senior Viviana Macias said they have enjoyed this aspect of his class.

“They [the quotes] really brighten my morning,” said Macias, who’s in Durham’s second period Pre-calculus class. “They are very relatable and positive.”

Despite the change from Klein to substitute teachers for nearly a month to Durham, the senior said she eventually got used to Durham’s teaching style.

“It is simple, but it has taken some time to get used to because Mrs. Klein, our former teacher, had a completely different — and complicated — way of running class,” Macias said. “Mr. Durham is pretty awesome. He is always full of energy for my classmates and me.”

Math Department chairwoman Mariam Tan said she was part of Durham’s virtual interview panel on Jan. 14 along with a few other staff members, and said Durham’s personality stood out the most.

“Mr. Durham seemed like a thoughtful and empathetic teacher and had experience working with students online during these pandemic times,” Tan said. “Everyone on the interviewing panel thought that he would be a great addition to our Math Department. He was calm and professional — we could all tell that he would have a great demeanor with his new students.”

Outside of the classroom, Durham has many hobbies, one which includes coaching basketball at Westminster High School every single day of the week after school. However, he will likely be joining the SH coaching staff starting the next school year.

“I love to watch movies, play video games, eat, work out and hang with friends and family.” he said. “My favorite games are Call of Duty, Madden and NBA 2k … I am pretty chill inside and outside of the classroom and like to have fun whenever possible.”

Principal Allen Whitten said he always sees the potential in all of his new staff hires.

“He seems to be the real deal,” Whitten said. “The bar is very high for Sunny Hills teachers. We know that kids learn from those they love so in addition to being experts in their subject area, they need to be able to inspire their students [and] build positive relationships.”