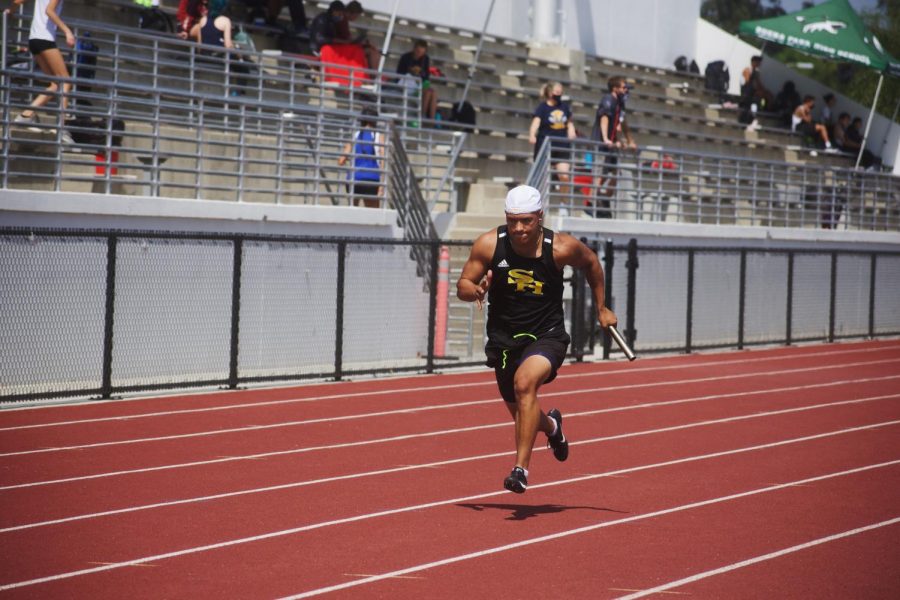 Senior Brandon Roberts sprints toward the finish line in the boys 400-meter relay as his team places first with a 44.70 time. Roberts’ relay team will be among others from the boys and girls track and field squad advancing to California Interscholastic Federation-Southern Section preliminaries June 5 after placing in the Top 3 in their races.

A total of 15 runners and one high jumper from the boys and girls track and field team will compete June 5 in the California Interscholastic Federation-Southern Section [CIF-SS] preliminaries after placing in Top 3 in their events in the Freeway League finals at Fullerton Union High School.

“The work that [the team] has been putting in since January is probably the biggest factor that contributed to today’s wins,” track and field head coach Jacob Holloway said. “I feel great about the wins; [however], we need to stay switched on for preliminaries.”

“I was very surprised about beating my personal records for the 100-meter and 200-meter dash,” Jones said. “It goes to show that all the hard work I did paid off in the end.”

She also placed in the girls 400-meter relay along with senior Abigail Haan, juniors Abigail Hahm and Esther Oh with a time of 52.79 seconds, leading the Lady Lancers to place first in the relay.

“I’m glad I was able to race today because I got injured last week and wasn’t sure I would be healthy today,” said Haan, who also raced the 1,600-meter relay, 200-meter dash and the 400-meter dash. “I basically just stayed relaxed, focused on my form and ran. Also, I’ve been putting in time for the whole season, so it’s paying off now.”

With a time of 53.68, sophomore Mitchell Yeo placed third in the boys 400-meter dash, finishing behind two runners from Fullerton High School.

“When I qualified, I felt like I had a lot of things to improve on and to especially get my head more in the game of strategy,” Yeo said. “Overall, I feel like I can train more on endurance and speed training.”

Seniors Brandon Roberts and Vincent Silva along with sophomores Brian Singleton and David Mahood placed first with a time of 44.70 seconds for the 400-meter relay.

“I feel great for placing first in the 400-meter relay,” Roberts said. “I strived to be ahead of everyone in my leg of the race.”

From the field events, only sophomore Drake Cortez advanced on to the next round for the high jump event with a total distance of 5’10”.

As of May 20, the Lancers do not know who they will be running against at the June 5 CIF-SS meet at Moorpark High School in Ventura County. To advance to the next round after that, runners would have to place in the Top 8.

Meanwhile, the head coach is also looking toward the future of his program.

“Instead of standing out in certain events, we need more depth across the board, which means better recruitment across the school, getting more athletes out and to take track more seriously,” Holloway said.