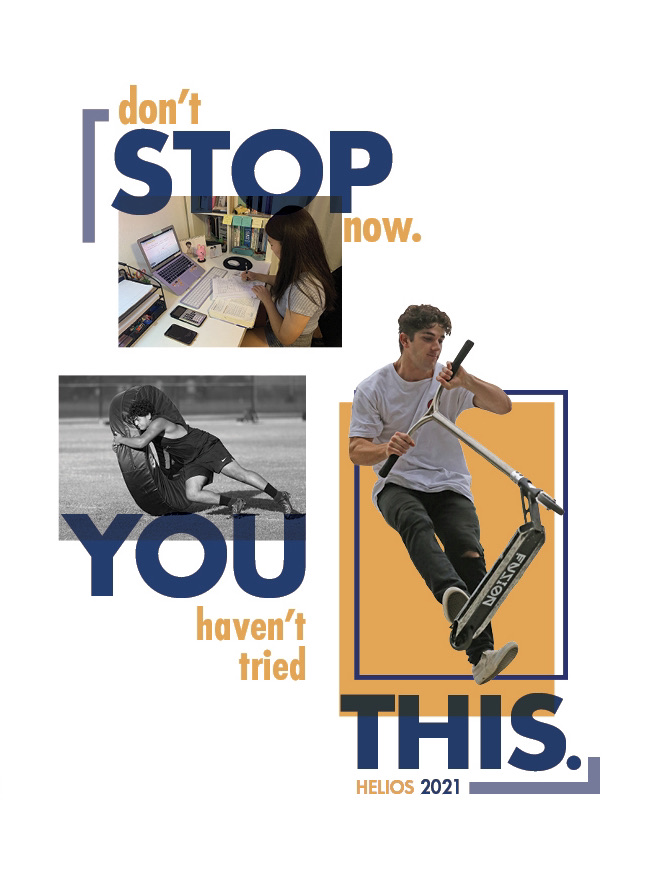 Though the 2020-2021 yearbook will not be distributed until late June or early July, Helios released an image of its front cover with the theme “Don’t Stop Now. You Haven’t Tried This.” on its Instagram account (@shhshelios) April 30.

As a result of the COVID-19 pandemic, which provided an unreliable event timeline, Helios staffers had to make a series of adjustments to how they produce content, causing it to be delayed for distribution until the summer.

Prior to the pandemic, the yearbook consisted of the traditional and chronological structure in which every subject was covered in separate spreads; however, Helios transitioned into using an “umbrella coverage” because of the uncertainty in the amount of potential events to include in the yearbook, Helios co-editor-in-chief Anika Madan said.

“Umbrella coverage allows us to take one main topic, for instance, competition, and cover student life, academics and sports on each spread,” Madan said. “We had some experience [using this structure] from last year’s academics section, but we’ve learned how to extend that to the whole book.”

Although this modified yearbook structure allowed the Helios to become flexible with the yearly coverage, the staffers experienced difficulties in contacting student sources.

“If we were fully in person, we could easily summon any student during fifth period or find them around campus,” Madan said. “However, it’s harder to reach out to them since they’re busy and may not have time to respond.”

To resolve this issue, Helios staffers contacted more than the usual number of students for each story and implemented the use of Google Forms to survey them, she said.

The difficulty of contacting sources led to another modification that the group had to make — producing its content using the method of crowdsourcing to acquire photos.

Helios adviser Lindsay Safe said that crowdsourcing, a method of relying on the student sources themselves to take their own photos, assisted the photographers and staffers who struggled to physically visit individuals for the stories.

“We can’t make a yearbook without photos,” Safe said. “Thank you to all of the students who dealt with our requests to take, and often retake, photos.”

First-year Helios staff member junior Joshua Jung said he was disappointed after hearing about the transition to distance learning, which changed his expectations.

“When I first decided to join [the] yearbook, it was mainly [for my interests in] photography and meeting new people,” Jung said. “However, because of distance learning, both of them were hard as barely any students went to school, and I had to do most things online.”

Despite all the hardships the Helios experienced, the staff members managed to successfully produce the 2020-2021 yearbooks that students can still purchase on the Sunny Hills webstore for $85 with the Gold Card and $100 without until they are sold out.

“I think students and teachers are incorrectly assuming we couldn’t make a yearbook and didn’t understand how we’d get content [because the] sales are way down from past years,” Safe said. “We only ordered 650 given how many we’d sold when our numbers were due [and] at this point, we have under 100 left.”

Although the yearbook still consists of 312 pages in length like previous years, it went through a change in content because of the decrease in the number of school events and the variety in academic opportunities, so it focuses more on capturing students’ personal lives at home and outside of school.

Yearbook distributions will take place in late June or early July in or near the quad, although the specific date is undetermined.

“Everything will be worth it when you see the book [still has] 312 pages that document the lives of our community during this year,” Safe said. “If anything, this is the year you’ll want to remember when you look back on high school, and we did the best we could.”