Board and Brew offers healthy, tasty sandwiches worth the drive — and a bite 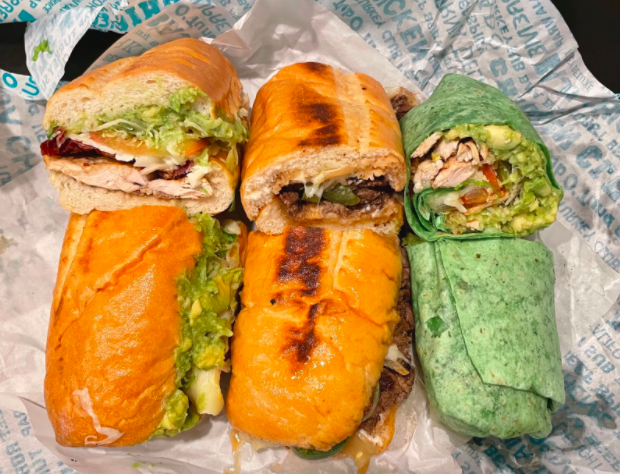 Board and Brew makes all of its sandwiches — including the $9.50 Chicken Club (left), $12.95 Baja Beef and $8.95 Baja Wrap — with fresh ingredients and its secret, gluten-free, nut allergy free, vegan-friendly sauce.

“Do your tastebuds need a visit from the flavor fairy?”

Board and Brew, the new restaurant that celebrated its grand opening in La Habra last month, displays this question on its website as it invites customers over to its 20th location to try its salads, specialty sandwiches — which can be eaten with gluten free wraps or spinach wraps by those with allergies or special dietary needs — and craft beer.

This restaurant holds the potential for many teenagers to check out and grab a bite at because of its flexible menu, tasty sandwiches and secret sauce not served anywhere else but here. The bright teal, pink, green and yellow walls with pictures of surfers hung on them contribute to a nice atmosphere inside as well.

Aside from the beverages, side orders and house salads, the menu divides the sandwiches into three categories — “Groms,” “Specialties” and “From the Grill” — that make eating accessible to people of all different ages and dietary preferences.

The children’s section “Groms, ” a shortened way of saying grommet (a young surfer under the age of 18), offers a Big Ripper grilled cheese sandwich and Chase Quesadilla for younger or pickier diners.

This creative name stays true to the surfing theme of the restaurant that developed over time.

“Tom Powers, the founder, named the shop Board & Brew because ‘board’ in the English tradition means ‘food,’ as in ‘room and board,’ and ‘brew,’ well that’s self-explanatory,” said owner Mike DeSanti. “Over the years, many people have associated ‘board’ with surfing because of Board & Brew’s proximity to the beach in Del Mar.”

In addition, the option to eat any sandwich with gluten free wraps or spinach wraps accommodates those with dietary restrictions.

Board and Brew doesn’t mention whether or not they have a most popular item, leaving people the freedom to find the one out of the 17 sandwiches that suits them best on their own.

The Chicken Club consists of marinated chicken breast, bacon, melted Jack cheese, mayonnaise, tomato and lettuce on a toasted French baguette. (I chose to take out the mayonnaise and add avocados into the sandwich.)

This sandwich reaches and exceeds expectations, as the meats and fresh vegetables blend harmoniously to create a flavor that tastes savory and not at all greasy. Additionally, the mixture of different textures from the various ingredients make not only the first bite, but also the rest after, burst with flavor.

It also feels healthier than the sandwiches from Subway because of its well-balanced taste. Ingredients from both restaurants are equally fresh, but Subway tends to make their sandwiches salitier, whereas Board and Brew utilizes other items in the menu to even out the relish of the meats.

The sandwich lacks anything to complement the warm, juicy steak, and the humongous chunks of jalapeño do little to help. The absence of other less umami flavors to round off the strong taste makes the sandwich greasy and easy to get sick of.

In addition, the thickness of the baguette can make the bites feel unbalanced. Both the Chicken Club and Baja Beef use a toasted French baguette, but the latter has less food in the sandwich itself to round off the tastes and textures. Instead of emphasizing the grilled beef, the thick chunks of bread take away from the overall flavor as customers may end up with much more bread in their mouth than the meat.

Between the Chicken Club that tastes great and the Baja Beef that tastes less so, the Baja Wrap — marinated chicken breast, avocado, grilled onions, jalapeño peppers, melted Jack cheese, tomato and lettuce served in a spinach wrap — falls somewhere in the middle of the spectrum. (My family ordered without the jalapeño in it.)

This wrap highlights the “the highest quality hormone free, organic when possible, sustainably farmed” ingredients, according to the official Board and Brew menu, that go into the sandwiches at Board and Brew. Because of the thin but tasty spinach wrap, customers can enjoy the healthy meal without feeling sick of the flavor like with the Baja Beef.

The tender chicken, crunchy onions, juicy tomatoes and soft avocado complement each other and create a nice balance of taste and texture. However, although each employee might make the wrap differently, the odd distribution of the ingredients within the wrap makes it difficult to eat and enjoy all the flavors in a single bite.

Instead of an even spread, a thick layer of avocado fills the entire right side of the wrap while the chicken stays clustered in one corner, which makes it hard to truly enjoy the meal.

Even these three items on the menu differ from each other greatly and the 17 options, each special and customizable in their own way, give the restaurant enough to compete with other well-known sandwich franchises like Subway or Jersey Mike’s.

Something that really sets this restaurant apart, though, has to be the special Secret Sauce.

Each sandwich comes with this faded yellow orange, almost salmon-colored sauce in a circular plastic container that diners can either dip their sandwich into or use any other method to eat. Customers can also order a bottle of this secret sauce for $5 if they choose.

Though the restaurant won’t release its recipe, this gluten-free, nut-free, vegan-friendly sauce adds another unique element to each of the sandwiches as well as a rich complement to some of the greasier meals like the Baja Beef. This sauce may be the reason why the sandwiches taste less salty; with this condiment to tie all the flavors together, no need exists to add extra unnecessary flavors.

Overall, Board and Brew offers a wide assortment of sandwiches with different ingredients and bread as well as a variety of side orders, beverages, extras and salads that can accommodate many people.

Ordering the food comes easily, as the menu clearly lists the meats and vegetables that go into each meal and the type of bread it comes on; it helps customers take out unwanted food items without having to build their own sandwich. In addition, customers have the option to add extras like cheese, avocado, bacon, pickles, banana peppers and jalapeños if their sandwich of choice doesn’t include them for an additional charge anywhere between $0.50 and $2 depending on the food.

The only inconvenience — a long wait time — can easily be avoided by going at a time with less people, but even the wait felt enjoyable because of the two TVs broadcasting sports from one channel and funny clips similar to America’s Funniest Videos from another channel.

Even though it’s 3.5 miles or nine minutes drive from Sunny Hills, many should consider getting on “board” with this promising restaurant, especially when the new semester starts in August and many students are expected to return for live classroom instruction.