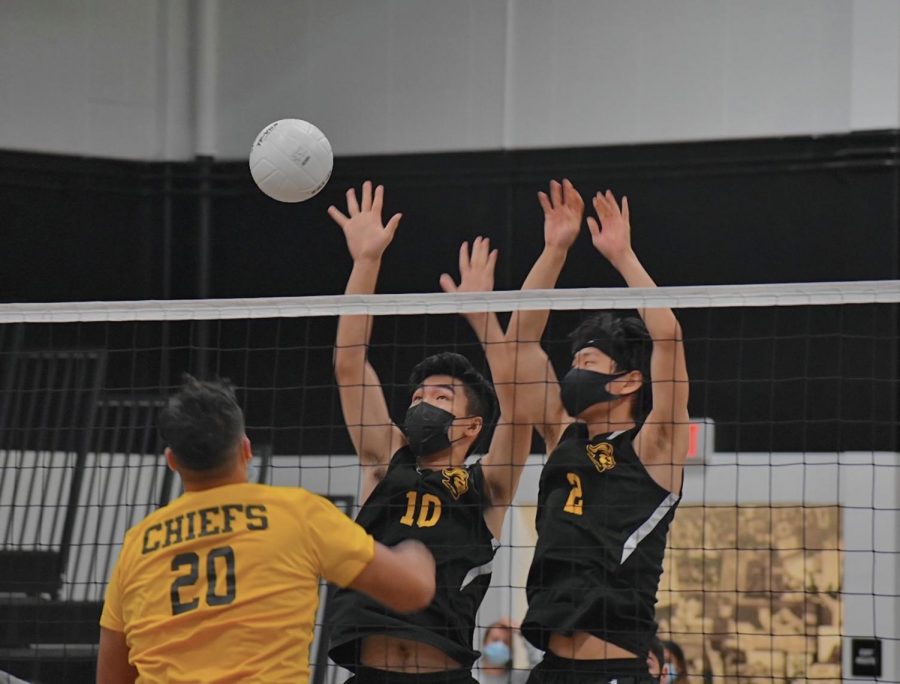 The win allows the Lancers (13-3) to advance and play in the second round of CIF playoffs tonight, May 20, at 6 in an away match against Rancho Alamitos (8-2) in Garden Grove.

It has been a year of firsts for the Lancers. Their inaugural season got cut short last year because of the coronavirus pandemic. The team played only 11 games but had never started Freeway League matchups.

So it wasn’t surprising that the Lancers took care of business in the opening set against Santa Fe, 25-15.

Besides the offensive spikes from outside hitter junior Zachary Tan, the Lancers’ middle blockers, seniors Julian Kim and Jaten Jhawar, were key to holding off the Chiefs by a 10-point margin.

“I’m glad that we were able to shut them out and win the set,” Kim said. “Though we could have done much better with connecting and covering each other.”

Despite the strong start, the Lancers’ poor plays in the second set allowed the Chiefs to even the match at one set apiece, 22-25. This time, the Chiefs’ middle blockers figured out how to stop the Lancers, limiting the effectiveness of sophomore Logan Filadelphia’s sets for middle blocker junior Ezra Vlad’s spikes.

“We could have talked a lot more, and there were a lot of communication errors,” Vlad said. “We felt like a different team when compared to our last couple of games in [the Freeway League] — it didn’t feel like we were undefeated league champions, but a lower class team.”

The third set proved pivotal as the winner would be able to build momentum heading into the fourth set. While the Chiefs’ hitters blocked many of opposite hitter senior Jason Thomson’s spikes, the Lancers were able to pull away, taking the set 25-21 with one more set to go to notch the team’s first CIF victory.

“We didn’t play our best and beat ourselves today,” Thomson said. “I felt that we were a little sluggish, and we definitely can play to a higher level.”

The fourth set continued at the same pace as the third with the Chiefs vigorously guarding any attempts for the Lancers’ hitters to score. Their middle blockers denied direct passage of any of Kim and Jhawar’s offensive hits.

Eventually, the Lancers broke the point-for-point status quo halfway through the set and finished off the Chiefs, 25-20.

Despite the win, several Lancer players know that they’ll need to be more on top of their game if they want to advance past the second round of CIF playoffs. A few even acknowledged going through some in-game jitters because of being in the moment of history.

“I felt like we could have played a lot better and that we made a lot of mistakes,” Tan said. “I definitely felt that we played worse because we were nervous.”

Kim said he and his teammates need to look beyond their performance in past Freeway League matchups.

“We definitely could improve on connecting and covering for each other,” he said. “CIF is a whole different world [from the Freeway League] so it’s definitely going to be hard, but we’re determined to be better with team communication by the next game.”

Nevertheless, the Lancers’ head coach said he is proud of the team’s performance and encourages his players to maintain a cool mindset.

“It was just great overall,”  Soliguen said. “We can’t let our errors get to our head so it’s mostly about staying consistent.