IN RHYTHM: Freshman aspires to move up levels in different style of gymnastics 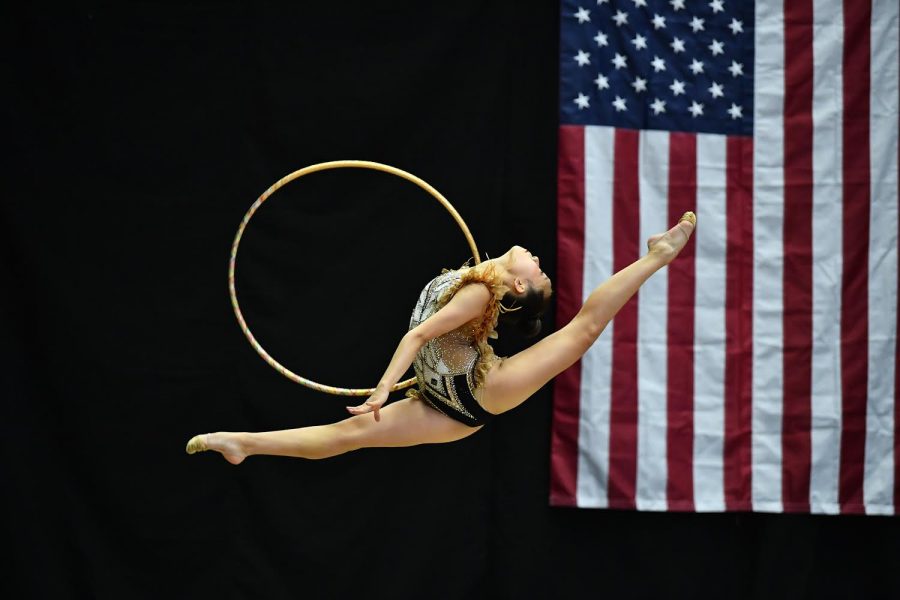 One minute and 30 seconds. She has but one chance to gracefully execute the routine perfected throughout the months of long and grueling practices.

Her ribbon routine performed with the jazz song, “In the Mood” by Glenn Miller, granted her a gold medal in the ribbon event among her age group.

A select few athletes such as Jung, who placed at No.1, were given the honor to be personally awarded a medal from two-time Olympic gold medalist, Evgenia Kanaeva.

“It was very memorable [because] not only did I go to just compete, but I was able to work one-on-one with an olympian,” Jung said. “It was one of the biggest competitions I’ve been to, other than the ones in New York.”

The freshman started her athletic career with artistic gymnastics — the more well-known sector of gymnastics — in first grade. At age 7, she transitioned into rhythmic gymnastics, which better suited her physical abilities, and officially started competing when she turned 9 years old. Unlike the artistic category, rhythmic gymnastics focuses more toward graceful dance-like movements and includes apparatuses such as hoops, ropes, clubs, balls and ribbons.

“[In 2015] my mom showed me a picture of a USA national team member that went to the gym that I’m currently at, and it really caught my interest because she was in [a] glittery leotard and had really pretty ribbons,” Jung said. “I told myself that I would be just like her and do the sport.”

Just two years into competitive rhythmic gymnastics with notable success in USA Junior Olympic Levels 5 and 6 (regional ball champion and third place overall), Jung immediately advanced into the FIG [International Federation of Gymnastics] Level 9 Hope division and was taken under the guidance of Blagovesta Ignatova — national coach of USA Gymnastics and 2008 Beijing Olympics rhythmic gymnastics judge. The Hope division is a category designated for gymnasts under the age of 12.

“Hannah is very talented when it comes to the physical side of her performance and is a hard-working athlete,” Ignatova said. “[She] is a great role model and an inspiration for the rest of the gymnasts but also has a great personality that makes her even more liked.”

Throughout her rhythmic gymnastics journey, the athlete’s mom, Susan Jang noticed tremendous growth in the teen’s overall performance but also noted the things that were given in return.

“Each year adding to her gymnastics career, Hannah had to give up something, [and] she is far more mature than most [teens] her age, due to harsh training schedules,” Jang said.

By devoting 20 hours on a weekly basis, the athlete would often prioritize practices and decline hang-outs with friends or make adjustments to accommodate her busy schedule.

“I really sacrificed my childhood for this sport, but I really don’t regret it,” Jung said.

Two years ago, the athlete considered retiring from the sport after losing motivation and feeling mentally and physically drained. In such times, she often turned to her coach for emotional reassurance and support.

“When it gets too hard — rhythmic gymnastics looks very elegant and pretty, but behind all that are long hours of tedious repetition and hard work — I remind her how much she loves the sport, and this is the source of her energy and motivation,” Ignatova said.

With the addition of the pandemic and its restrictions, the athlete found herself feeling less driven.

“Practicing online was actually very hard, [and] I feel that I lost my motivation in a way because there was really nothing to do other than look at a screen,” said Jung, who returned to in-person training in February. “I was in a tight space — the location was not ideal for my high tosses and it was very limited — [but] going in-person is a lot more motivational and helps me keep going.”

Her teammates, however, find inspiration in her healthy attitude and motivation.

“Her perseverance and optimistic attitude [motivates] our group to continue, even in times of adversity,” 4-year teammate Sophia Sun said. “Because of the bond we share, our rhythmic gymnastics group was able to become cohesive and communicative, leading us to reach heights on regional and national levels.”

Because of the COVID-19 pandemic, Jung, currently, a level nine junior athlete, and her fellow rhythmic gymnasts lost their opportunity to place into Level 10 — the highest rank — during the 2020 season. Competitors who are under 16 such as Jung are classified into the junior category of the sport.

On April 17, the freshman competed at the Junior Level 9 Classic Championships  — a national event held in Grand Rapids, Mich. — for a second shot to advance into Level 10 rhythmic gymnastics. Just the Top 40 athletes out of over 200 competitors advance into the next level of the sport.

Despite spraining her dominant right foot just two days before the competition, Jung took on the challenge to continue with the tournament.

“I just made myself compete,” the rhythmic gymnast said.

Nevertheless, her injury had an effect on her performance, and she placed outside of the Top 40.

“I can say that I am proud of myself for getting on the flight to come all the way to Michigan even though I knew I wasn’t at my fullest physical capability,” Jung said. “I do not feel discouraged about my performance as I knew there was nothing more I could do with my injured foot.”

After taking a short break following her out-of-state competition, she is currently preparing for her upcoming Pacific Cup tournament — a virtual event held on May 28.

With the 2021 rhythmic gymnastics season soon coming to an end in July, she looks forward to the 2022 season with hopes that the third time will be the charm for her advancement into Level 10.

Despite her personal challenges, the freshman’s dedication to completing her rhythmic gymnastics journey has gone to impress her mom, coach and team members.

“Hannah’s accomplishments are Hannah’s own and only through her devotion and love of the sport,” Jang said. “She is still in her path, deciding and prioritizing what is most important to her, but as of now, she is a beautiful rhythmic gymnast.”