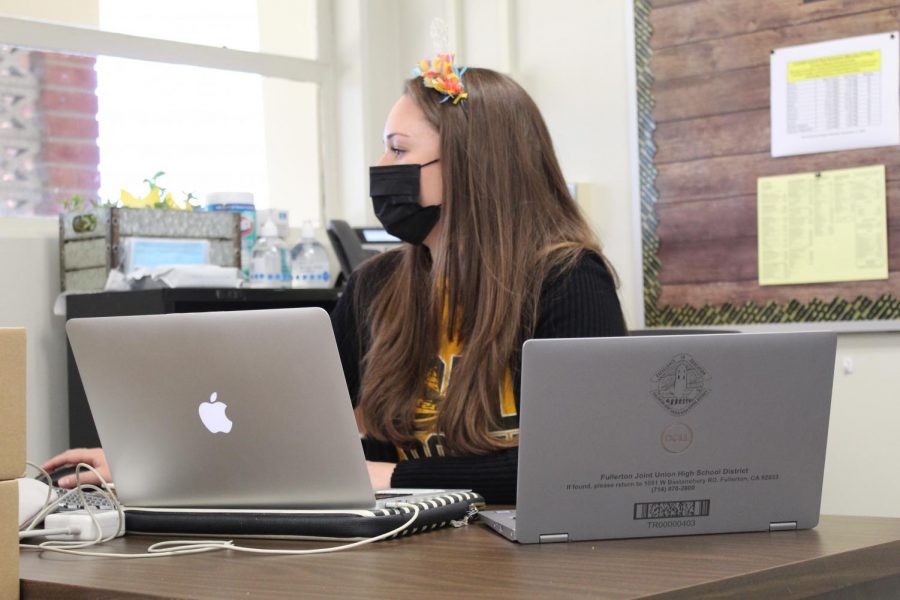 With her iMac and school-issued chromebook on her desk, social science teacher Kelsie Thompson works on instructing her fifth-period Economics students Friday, May 14, over Zoom as well as those who are live in the classroom. Thompson was hired to fill a teaching vacancy at the beginning of the spring semester.

Kelsie Thompson remembers setting up her easel with an alphabet chart and arranging her stuffed animals in a circle to teach them —all before she started transitional kindergarten.

Along with the alphabet, she would teach her “students” about the importance of cleaning up after themselves and Bible stories that her parents taught her.

When she wanted to have more space to teach, she would move to her backyard patio so her pupils can have snack and nap time.

“My parents always say that it was my favorite thing to play because I got to organize my stuffed animals and kind of be an adult, which fit my orderly yet sweet personality and experience as the oldest sibling,” Thompson said.

Her next sign of joining the education field came when she was a senior at El Dorado High School in Placentia.

Her classmates nominated her as the “most likely to be a teacher at EDHS” in 2015, Thompson said.

“I think people nominated me for that position based on my personality, work ethic, school spirit and role in ASB that year,” she said. “I was a co-commissioner of teacher and staff recognition, which was perfect for me because I loved the teachers and staff at my school, so I wanted to return their kindness and show gratitude for their dedication.”

Though all signs signaled her to major in education at the college level, Thompson said she decided to branch out a bit first. After graduating from high school, Thompson attended Biola University as an undeclared major.

“I had always figured I’d probably become a teacher, but I had other interests, too, so when it was time for me to go to college I was so excited to try new things and really wanted to explore all the options I had,” she said.

Thompson graduated from Biola in May of 2019 with a degree in history as well as a minor in biblical studies. She then got her teaching credential in 2019 from her college alma mater.

Now, instead of her stuffed animals, she sees students from a variety of grade levels not only in her classroom, but through Zoom as a new social science teacher at Sunny Hills – hired during the second semester.

Thompson teaches her favorite subject: social science. For first period, she has U.S. History, a required class for all juniors. Then for third period, she has World History in which all of the students are freshmen. She teaches period four American Government and Economics period five and six, all senior classes.

She acknowledged that she has a huge workload with a diverse range of classes for a first-year teacher.

“It’s a lot to prep for so many lessons, but it’s really fun, and I enjoy it,” Thompson said. “It’s an unexpected way to start but overall going pretty well.”

Upon starting her job at Sunny Hills, she broadened her horizons by teaching American Government and Economics and enjoys both subjects.

“I’ve never taught American Government or Economics before, so I would say those are standing out to me just a little because I’m discovering some new passions there,” the instructor said.

Thompson engages her students by starting class with a check-in as well as conversations to get to know her students.

In one recent Economics class, she asked her students, “Did you guys have a good weekend?” as they entered the classroom or Zoom meeting with Thompson pointing to her countdown of how many days of school are left.

After everyone is in class, the instructor shared about her weekend, noting that her brothers graduated from Biola and showing them a picture.

Before eventually starting her lesson, she mentioned to her seniors that she would be at their graduation ceremony to cheer them on.

“For me, it’s all about the personal relationships,” Thompson said. “I really want to meet their needs to the best of my ability, so any time I can, [I] engage with [my students] on what they’re working on and interested in.”

She does not feel that online schooling impacts her teaching since she worked as a substitute teacher at Bernardo Yorba Middle School from August 2020 to February 2021. She mostly taught English Language Development, but she taught all subjects, along with special education classes. Thompson’s transition to the hybrid learning model was seamless because of her prior experience with online teaching.

“I got to have a very smooth transition experience in the hybrid online learning situation; whereas, I know if I didn’t have that job I would definitely have a little harder time adjusting,” she said.

Thompson’s experiences as a permanent substitute teacher impressed principal Allen Whitten as the job exhibited her versatility and ability to work in many areas.

“Her references were off the charts, just super positive,” Whitten said.

When hiring for a social science position, Sunny Hills looks for people who can do something beyond teaching, Whitten said. Thompson accumulated leadership experience from high school after being a leader in the Fellowship of Christian Athletes, National Honor Society, Link Crew and the Associated Student Body.

The principal said he looks forward to seeing how Thompson would use those experiences in working with students in the future.

“We want [Thompson] to get settled and refine her craft and become [an] outstanding teacher, and then in a year or so challenge her to pick up some leadership opportunities around campus,” Whitten said.

“The transition from substitute teacher to a permanent teacher was a bit difficult, but Ms. Thompson made sure to make it a lot easier for us,” Ramirez said.

Ramirez said she also enjoys Thompson’s class because of her constant motivation and consistent care for her students.

“Ms. Thompson’s class is always a good thing for me to look forward to throughout the day,” she said. “She shows that she cares about her students and encourages us to complete our assignments as well.”

Another one of her students, senior James Delgado, in Thomspon’s sixth period Economics class,  shared conversations with Thompson about the difficulties of choosing which university to attend and with her help, now looks forward to attending Biola University with an undeclared major while considering a future major in engineering or computer science.

Besides teaching, Thompson said she enjoys baking, country music, being involved as a leader in the Young Adults group at her church and cheering on the Los Angeles Kings hockey team.

“By studying history, government and economics, we learn about people and about life, which allows us to recognize how those connections are made,” she said.