Finding my identity through the pandemic 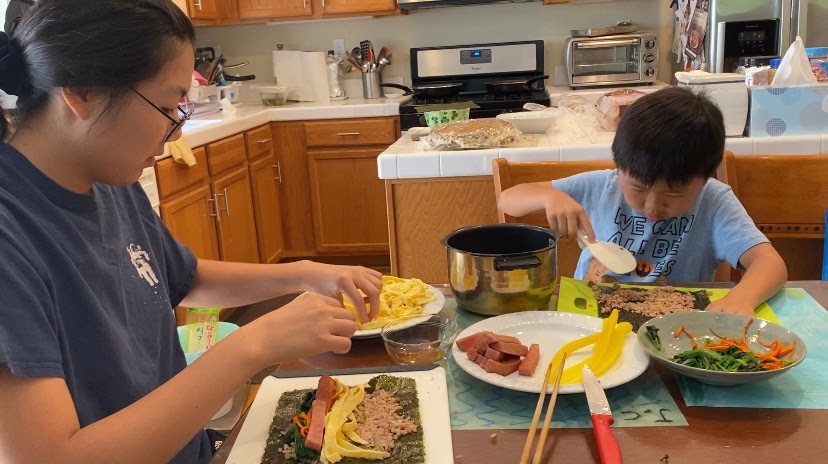 A few weeks into the pandemic in May 2020, I woke up to a scent that drifted its way up to my room.

It was different from the bland whiff of a peanut butter and jelly sandwich I had on my walks to school. Instead, it was the wafting smell of savory and wholesome miyeok-guk, a traditional Korean soup. It was the aroma of my cuisine and culture that I had neglected for quite some time.

From this moment, I wondered, Did any good come from the pandemic?

Holistically, I don’t think so. But one thing I learned through the coronavirus pandemic is to appreciate the little things.

The events fueled by COVID-19, specifically social distancing, made me realize how much I took family time for granted and, more importantly, I began to explore more of my identity as a Korean American.

Although Korean was the first language I learned, the growing gap between me and my culture was inevitable as I  tried to keep up with mainstream American lifestyle — at least until the pandemic.

Quarantining with my Korean immigrant parents woke me up to a lifestyle that I had unconsciously avoided. Before the stay-at-home orders, my opportunities to speak Korean were limited to when I came back from school and even then, I did not have a lot of time for long conversations.

Thus, through the span of the pandemic, I realized that swapping to and from English and Korean had formed a disconnect with the Korean culture.

For the first few weeks California was in a lockdown, I felt as if every other sentence I spoke to my parents was a tongue twister in which English words in my head got coiled with the Korean that was coming out of my mouth.

I started using much more Kakao Talk, the most popular messaging platform in South Korea, because my parents were more comfortable using it than iMessages. Moreover, the increased time I spent conversing with my parents refined my Korean speaking and writing skills.

Of course, it was frustrating at first because I was not as accustomed to the Korean keyboard and always pondered over the complex spelling. Nonetheless, it brings about good memories during the pandemic in which my parents, brother and I laughed at my absurd, yet hilarious mistakes.

More importantly, I felt a growing sense of pride as I communicated with my family more coherently. I cultivated a better awareness of Korean trends and customs as I spent more time watching Korean variety shows and films.

Instead of rewatching the “Gilmore Girls” series on my iPad by myself after school while my parents are still at work, I was more drawn to watching Korean shows like “2 Days & 1 Night” that my family was watching on the TV screen, taking a break from their jobs because of the pandemic. Eventually, I transitioned into watching Korean cinema on my own as well to try to make up for the years I had missed out on Korean entertainment.

As a result, I developed an interest in Korean humor (like “dad jokes,” which combine nonsense and humor in a witty way, or the almost cruel but hilarious games like bok bul bok, which means chance) that I previously had to look at subtitles to understand. My movie partner during the pandemic — my mom — would explain what the implied meaning was, and together we would burst into laughter at the joke.

Furthermore, these reality TV show episodes opened new doors in which the camera took me through the beautiful landscape where skyscrapers co-exist with ancient Buddhist temples, and members of the show like Kim Seonho and Kim Jongmin soon became my favorite comedians alongside NBC’s Jimmy Fallon.

All in all, the pandemic was a getaway in which I had the time and opportunity to explore a part of my identity that I was not familiar with.

Hopefully, I do not start mixing my English with Korean when I return to school though.