Fullerton, Brea robotic teams give back to local frontline workers 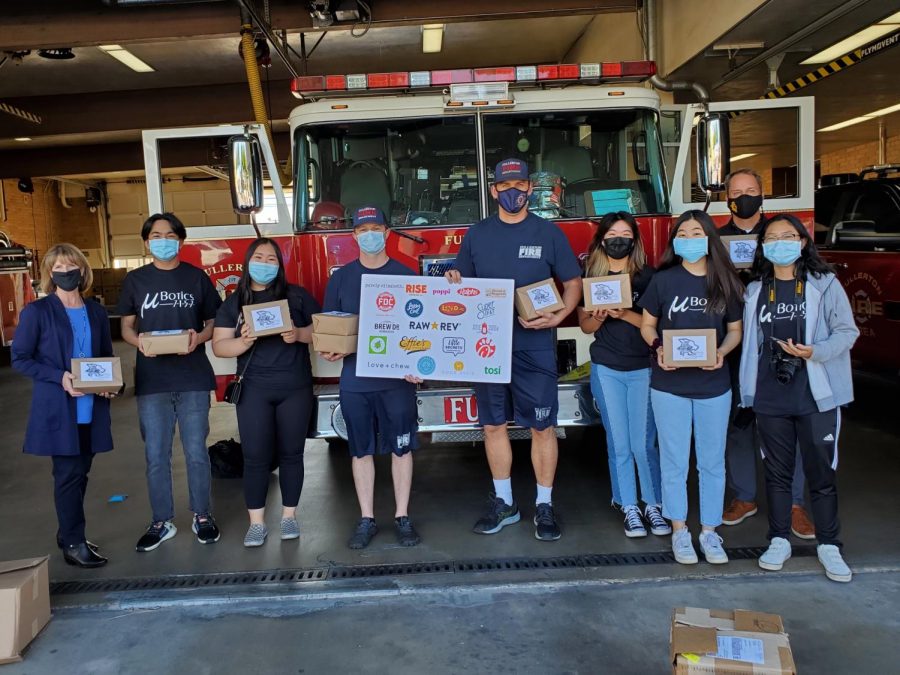 The Sunny Hills and Brea Olinda robotics team, along with principal Allen Whitten (top right corner of the group) and a few firefighters held the care packages that were delivered to the frontline workers on Jan. 18, Jan. 20 and Jan. 22 for their service during the COVID-19 pandemic.

Many in the Sunny Hills and Brea Olinda robotics team are usually on target when estimating how much time it would take to complete any of their projects.

To complete a new game called Milling Mania for a Game Design Challenge earlier this year, the team members finished in two to three months – exactly how long they had estimated it would take.

But what stumped them the most this school year was a project that had nothing to do with robotics or game creation.

“We thought it would take less than two hours to assemble them, yet it took over six,” said Brea Olinda lead robotics mentor Eric Eichinger about the packaging of $13,000 worth of donated goods ranging from Good Dees Mix and Zee Zees Bars to coupons for Chick-fil-A to be delivered to the Brea and Fullerton fire departments.

Eichinger, manager of the Boeing South California Chemistry Lab, coordinated the project with 19 SH and 38 Brea Olinda students comprising the business team. The donations for the care packages were requested in November and December by the business team and delivered the goods on three different dates: Jan. 18, 20 and 22.

The members met Jan. 15 in Eichinger’s garage in Brea to package everything as a group, and they were loaded into Eichinger’s van for delivery, said Jimenez.

Eichinger said the group sorted out 350 packages in total, and each contained protein and granola bars, baking mixes, candles, coupons and cookies.

“It took a long time to assemble the packages because we wanted to ensure that our frontline workers would be happy with what they were given,” SH junior Patrick Jimenez said. “We wanted to spend as much time as possible and not rush it so that it would come out great.”

Jimenez said Eichinger and the team’s president, Brea Olinda junior Clara Lee, picked him and around 30 other members up from their houses and drove them to hand deliver the care packages to the frontline workers at the hospital and the fire station.

“Meeting the frontline workers up close helped me realize how much they have done for us,” said Jimenez, who serves as innovation challenge facilitator – managing the entire team and completing the innovation challenge. “These people are helping us daily to protect their community, so giving back to them with care packages is the least we could do.”

“The team came up with the idea all on their own, demonstrating the level of care and concern they have for others,” Zanone said. “It shows a high level of selfless care for others and a willingness to do good for those who have worked tirelessly for everyone else during this pandemic.”

Jimenez said that because the robotics team could not join an in-person competition, it decided to devote its time to helping the community. The decision to help the community came first, and the team got a grant as a byproduct.

“Our business team did lots of research and contacted through social media to find sponsors around the country,” Jimenez said.

“The team leadership outlined a strategy and showed it to the team, and several members felt very strongly about doing a care package donation,” he said. “During the planning stage, it was about four Brea Olinda students, but as the effort expanded to making and delivering the packages, more members joined in, including several from Sunny Hills.”

Eichinger said that of the $3,000 from the Equity grant, $400 was used for the care packages, and no students or parents were asked to contribute any money to the cause.

“Students looked at Instagram postings for health food companies that wanted publicity, and the East Coast businesses saw this as an opportunity for ‘free’ product distribution,” he said. “Many of these businesses are sending us more products for round two.” The sponsors included places such as Purely Elizabeth, Ralphs, Lazy Dog, Chick-fil-A and Brew Dr. Kombucha.

Senior Elin Jang, the business lead from Brea Olinda, led the project by reaching out to different food companies. Eichinger said that Brea Olinda junior Jinhee Lee was the first member of the team to hit upon this strategy.

“When the businesses replied back to our emails, phone calls and cover letters, I felt so supported and encouraged in the process, and our team felt the same way,” Jang said. “We couldn’t have done this without these companies contributing hundreds of products to us.”

The team was informed of the care package drive through email as well as Discord, a messaging app.

Jimenez said the team will be responsible for managing any future projects for the community for the rest of the semester.

“The Care Packages Project was a wonderful opportunity for our robotics team to reach out to the first responders in our community and offer a small token of our appreciation for all they do,” Zanone said. “I would like to say to them that I am very proud of them and appreciate their expression of love for others.”