Many Sunny Hills Asian students, alumni not surprised by nationwide and countywide series of hate crimes against their ethnicity though the actions remain hurtful 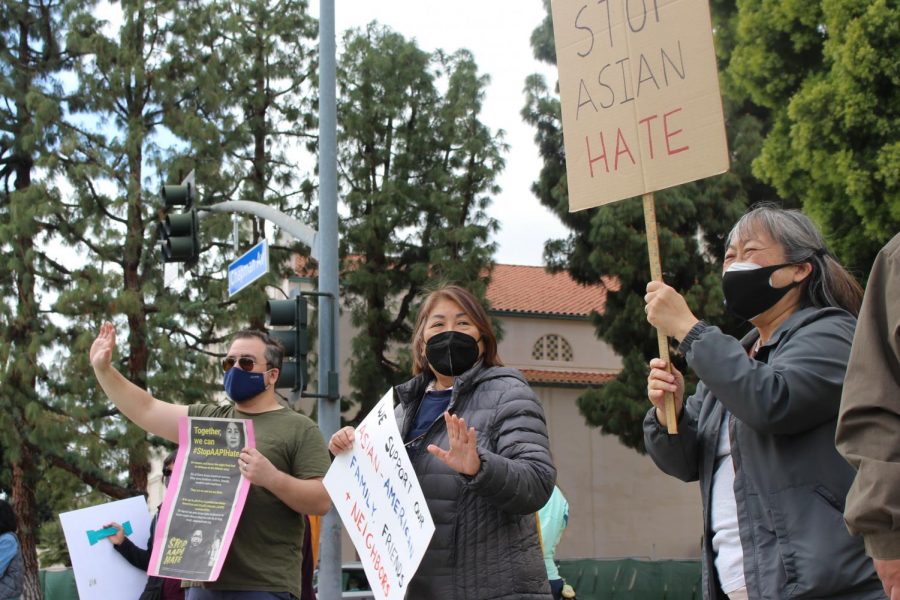 Some faculty and students at Fullerton Community College nearby Sunny Hills High School hold a demonstration outside their campus March 25.

Sophomore Jeffrey Tran spent his Sunday afternoon on March 28 helping out his friend’s parents tidy up their Westminster bakery after an act of vandalism.

Tran said that the incident took place during the afternoon while the shop was open, and the perpetrator wore a hoodie and mask, which prevented them from identifying him. He also cursed at the owners while shoving glass and food products from the shelves onto the floor.

“His family has always been private about things like this, and in general, they don’t like talking publicly about what happens to them,” Tran said. “I’m not completely sure if his parents considered it to be a hate crime or not, but both my friend [who doesn’t come to Sunny Hills] and I just assumed [it was] a hate crime because of what’s going on in the world nowadays.”

But what happened in a city 12 miles away from Fullerton, the sophomore never thought it would also happen in the town where he grew up. Upon finding out from The Accolade that a man threw rocks March 31 at a Korean mother’s Tesla near the Sunny Hills campus as an act of hate, Tran responded with shock and fear.

“For me, I just find it surprising how often [Asian hate crimes] can happen,” he said. “I don’t live too far from the school, so learning that this is happening nearby makes me worry that the same thing could happen to me or my family at any time. I always try to utilize what I have on my person, whether it is pepper spray, a taser or even a key, to keep me safe in the event I do get attacked.”

Asian communities nationwide first became more vocal about hate crimes against their heritage after the March 16 Atlanta killings of eight people, six of whom were women of Asian descent.

Some Sunny Hills alumni are enrolled at Emory University in Georgia, about one hour away from the first shooting location, but none have said they participated in any of the recent stop Asian hate demonstrations.

“My parents did have some concerns over my safety and called me right after they heard about the shootings,” said Class of 2018 alumna Selina Chong, who attends many of her classes over Zoom but does have in-person clinic rotations at the Emory University Hospital. “They advised me to not go out at night and if I did have to, they told me to always stay with another friend.”

Chong was also the 2017-2018 editor-in-chief of The Accolade, which has also given her the journalism background to help her evaluate the recent media coverage over the shootings and subsequent response among the Asian community there.

“I personally don’t feel that the media coverage over this issue has been over exaggerated,” she said. “Rather, I believe that it brought an important issue that has already existed into the forefront.”

Class of 2020 alumnus Daniel Lee said he did not face any racism in high school but has heard some comments that can be viewed as offensive during his first year at Emory University.

“Most of them are not very aggressive; it’s mostly stereotypical statements,” Lee said. “Personally, I don’t mind the comments, but it does show the lack of knowledge people have on the Asian community and culture.”

The freshman undeclared major said although he heard about what happened in Fullerton, it didn’t get a lot of media attention in Georgia.

“Obviously, it was terrible, and when I heard about it, I definitely thought about my family and checked up on them,” said Lee, whose younger sister, Karen, is The Accolade’s online graphics editor.

Chong said the increase of Asian hate crimes has also prompted her to be more concerned about the issue as well as her parents’ safety in Fullerton.

“It really hurts me to see how often we hear of hate crimes these days, especially ones that happen so close to home,” she said. “Unfortunately, this isn’t surprising to me because it happens so frequently now, and I feel like no matter where you are, hate crimes will happen.

“It hurts me every time it happens, and it’s frightening to even imagine that it could possibly happen to my parents.”

A bit over a week after the Atlanta shootings, some students and faculty at nearby Fullerton Community College also felt the need to demonstrate against hate as up to 25 people held signs like “Stop Asian Hate” and “Support Asian Americans” on March 25 at the corner of Lemon Street and Chapman Avenue, according to the college’s online news website.

Other Asian students attending Sunny Hills have expressed similar concerns though not through any public demonstrations on or off campus. Some have also taken measures to protect themselves and their parents or other older family members.

“It’s sad seeing how another community is being targeted with this much intensity,” junior Donghyun Kim said in response to learning about the March 31 hate crime. “It sucks because the Fullerton area is Asian-dominant, and such ignorance in our community is pretty disgusting.”

Although Kim said he was not aware of the Fullerton incident or the one in Tustin where a 40-year-old man allegedly punched an 18-year-old Korean woman at a public park on April 11, he said he has considered purchasing pepper spray for him and his mom.

“I never really considered it until recently, but I feel like my mother, as a woman, should carry some sort of weapon for protection,” he said.

Freshman Athena Wong was more aware of the recent local Asian hate crimes, including the one on April 18 in which a 25-year-old man allegedly knocked a man of 79 years and a woman of 80 years unconscious. Now more than ever before, Wong fears for her own grandparents’ safety.

“They are getting older and declining in mobility,” she said. “I do think that the San Francisco cases have put me into more of a fearful state, especially seeing a video of an attack that occurred on a 76-year-old woman.

“Understanding the woman’s words and emotions she expressed produced an uneasy feeling, knowing that could have easily been one of my grandparents.”

Wong said she will try to limit herself and her family from going out in public frequently while ensuring that she has a parent or guardian by her side when she does go out.

Despite her Asian heritage, English teacher Jennifer Kim has yet to feel the need to resort to doing anything extreme.

“I don’t panic on stuff like that,” Kim said. “I don’t think there’s some conspiracy out there to harm Asians.”

Instead of blaming this on former President Donald Trump and his use of the words, “Chinese Flu,” or others’ labeling COVID-19 as the “Kung Flu,” the instructor sees a more deeper issue at its core.

“I feel like the common denominator of the Asian attacks have been mental illness, so to me, that is something we need to address as a country,” Kim said. “If you look at a lot of the attacks, a lot of perpetrators have [a] mental illness. If you look at their past activities, they are either a homeless person or somebody who has had run-ins with the law before because of a mental illness, and I think that’s where we’re finding the problem.”

While Tran understands Kim’s reasoning, he disagrees that mental illness is a core issue.

“I think that mental illnesses do play a role in these incidents, but I personally do believe that it is possible that these people are also acting on their own beliefs of racism,” he said. “It’s hard to say whether the bakery offender [from my friend’s business] was homeless or had a mental disability.”

While Donghyun Kim also said that racism should not be excused with mental illness, he has an idea on how to deter Asian hate crimes.

“I feel like that is too strong of a statement to generalize,” he said. “I feel a more in depth conversation within the school community would be needed. We can discuss minorities’ experience and delve into topics such as microaggression and solidarity between cultures to educate us.”