Got talent?: Viewers will find out by paying $10 to watch Sunny Hills senior, Dance Production take on other acts from the district Friday, April 23 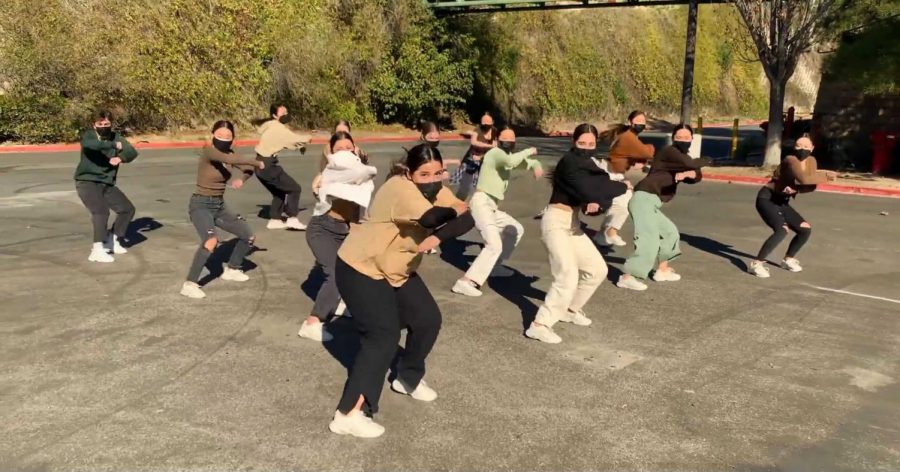 Image used with permission from Leiana Volen and Jennifer Maletto.

Choreographed by Shana Ned, Dance Production filmed its video performance Feb. 23 in the parking lot behind Fullerton’s Amerige Heights Town Center. Titled “Forever Changed,” the video garnered the most votes for a group during the virtual March 12 Quadshow sponsored by the Conservatory of the Fine Arts.

After earning the most votes for individual and group performance at the Conservatory of the Fine Arts [COFA] Quadshow, a senior and Dance Production [DP] will advance to the Rotary Club of Fullerton’s “Got Talent” Show Friday, April 23.

“I feel incredibly honored that students voted for me,” Lee said. “My jaw dropped, and I screamed both internally and out loud [when I found out that I won].”

Although the senior said she made a last-minute decision to switch songs, she still spent nearly five hours practicing, recording, adding sound effects and filming her performance video while managing to secure the most votes from students.

Because the annual March 12 Quadshow was held virtually this semester because of the COVID-19 health and safety protocols, DP was able to go beyond the confines of the campus to video record its performance, titled “Forever Changed.”

“We’ve been working hard to keep creative and put out work that showcases our team the way we would in a normal school year,” DP director Leiana Volen said. “In fact, the ability to film has added a new element of creativity to our dancing, and it’s been very fun to experiment with how film can enhance our performances.”

Lee and DP will compete Friday for a chance to win up to $750 for Sunny Hills’ Associated Student Body [ASB] as part of the 7-8:30 p.m. district-wide talent show, which will be released as a YouTube Live video.

To watch it, viewers would need to contribute $10, which will give them five votes to cast for the student or team entertainer.

“It was a song that I had practiced in elementary school, and it resurfaced recently, and so I decided to sing it.” she said.

Because DP was unable to show up in person to perform in front of a camera, it along with acts  from other campuses in the district will be part of a “Submitted Video” category for the YouTube Live video.

“I’m really thankful that we can help raise money for ASB through [our performances], especially because I’m also a part of ASB and [the money] could be really beneficial to our fund,” DP junior Tara Kim said. “It’ll also be a great opportunity for us to show off our talent and hard work that we put in this year.”