Freshman takes on youth editor role for the Fullerton Observer 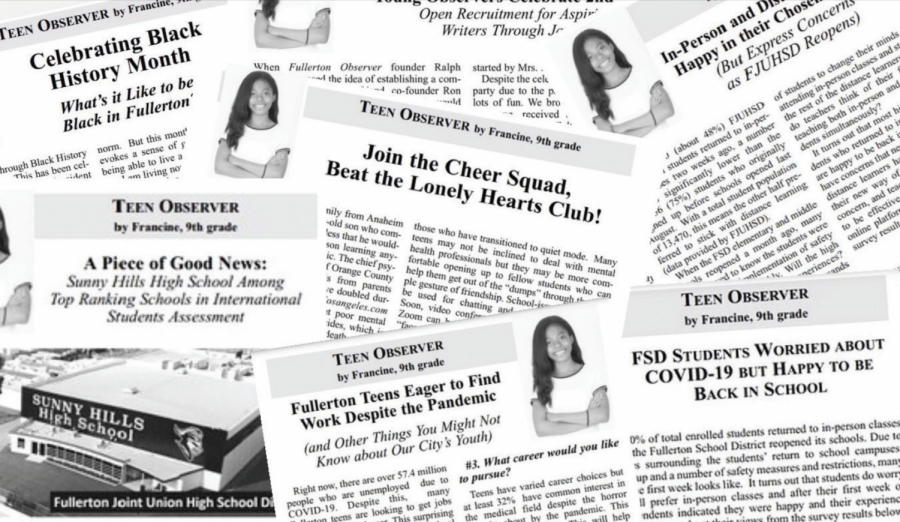 When she wrote her first “Letters to the Editor” to the Fullerton Observer about a story on babysitters, she had no idea that her opinion on the topic would start her work as one of their very own reporters.

Chosen by her previous editor, Freshman Francine Vudoti wrote for the Fullerton Observer as a kid columnist in the Fall of 2014 to write other columns and stories.

“This is a rare opportunity for me to serve our community through my writing so I value my role as a columnist and as a leader to my team of writers,” Vudoti said.

Once she familiarized herself with the Fullerton Observer, she created a youth section for writers by pitching her mission in the fall of 2018 to her now-retired editor, Sharon Kennedy, who loved the idea.

“I wanted other kids to have the same opportunity of getting their voices heard, gaining experience and developing interest in writing,” Vudoti said. “I spoke to the editor about it, and I got the approval to launch the youth page which I named ‘Young Observers,’ and I believe I am in the process of achieving this mission.”

Vudoti is the Youth Page Editor and decides which stories will be published in the paper. She reports to the Chief Editor of the newspaper.

“By joining the Fullerton Observer team, I get to develop my writing skills while I nurture my love for writing,” she said.

“We use Google Classroom to facilitate sharing of information such as article deadlines, guides for monthly themes, events to cover, special assignments and article submissions,” Vudoti said.

The Fullerton Observer “Young Observers” meet annually, and use Google Classroom in the meantime.

Her work for the Fullerton Observer gave Vudoti districtwide recognition in the fall of 2017.

“When I recruited writers, [Pletka] helped me pass out the [recruitment] fliers to all the schools in the district,” Vudoti said. “He also helps me with finding any information within his scope of work that I need.”

As of now she is not actively recruiting reporters since there are no available spots.

Along with being recognized by the FSD and FJUHSD superintendents, the FSD held an honor ceremony for her when she was in the sixth grade.

Principal Allen Whitten praises Vudoti for her major contributions to the city newspaper.

“She’s interviewed me a few times and she’s done some really outstanding articles for the Observer,” Whitten said. “Everything I’ve read that she’s done has been really well done, in fact I even included one of them in our school newsletter.”

Like Whitten, History teacher Mike Paris remains impressed with Vudoti’s work for the Fullerton Observer and enjoys having her in his class.

“She is an outstanding writer for someone of any age, let alone a freshman in high school,” Paris said. “She is a top-notch student in every area.”

Vudoti hopes to contribute to the Fullerton Observer after high school as an adviser, but does not plan to pursue a career in journalism.

“Right now, my plans do not involve a career in journalism because I want to explore the computer science pathway, but it can be a side gig or volunteer work,” she said.

This story originally appeared in the March 13 “One Year Later” issue, which you can read here.