Club Corner: Despite lack of fan … or balloon fare in welcoming inductees and changes to application process because of coronavirus health and safety issues, National Honor Society still seeing interest to join group 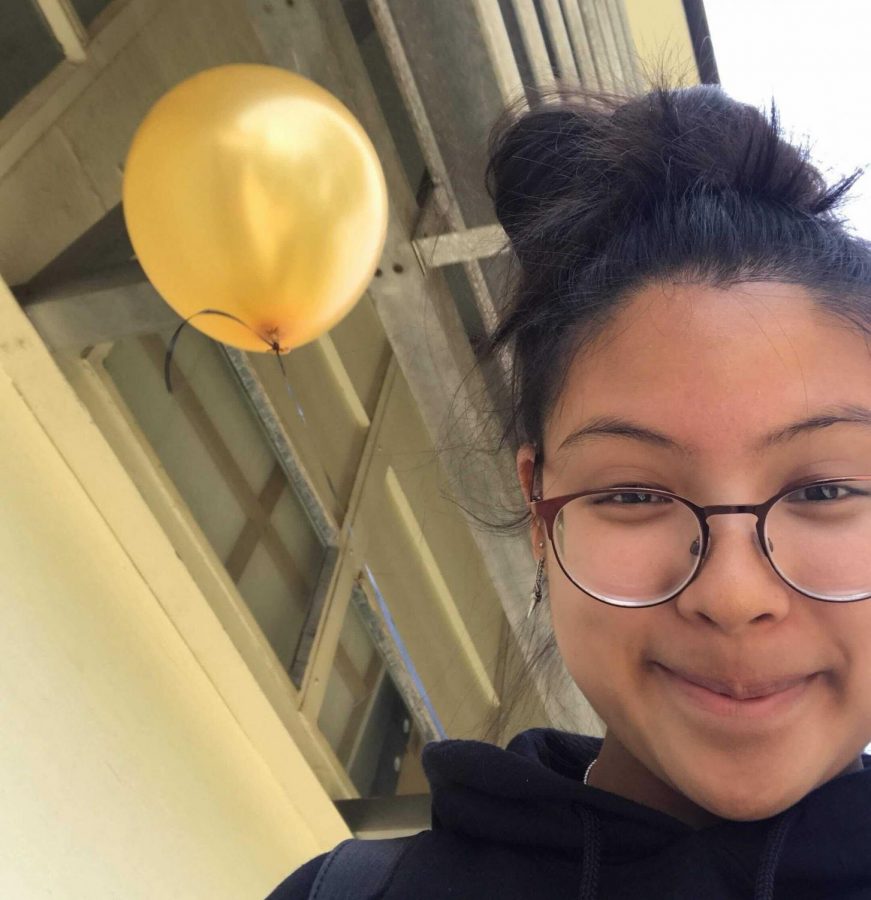 Then-sophomore Gianne Veluz takes a selfie with her Lancer gold helium balloon in the background after she got inducted into the National Honor Society during fourth period in May 2019. While the club is still seeing an interest in new applicants, it has been unable to carry out any of its induction traditions since the coronavirus pandemic broke out a year ago in March.

They come unannounced into various classrooms holding ribbons with helium balloons tied at the other end.

Their mission: to hand off a Sunny Hills Lancer gold balloon to the next wave of high achieving students on campus to join the National Honor Society [NHS], a tradition that has lasted even before English teacher Randy Oudega took over as NHS club adviser 20 years ago.

But such a traditional welcome has been missing since the 2019-2020 school year — that’s when the coronavirus pandemic caused the end of live classroom instruction from school March 13, forcing students to convert to distance learning for the first time and for the rest of the school year. Though school has reopened for live classroom learning, a majority of students are still opting to say at  home to learn.

“It was during finals week in May, and I had been overwhelmed with all my extracurriculars, [but] I was very shocked when someone came into my chemistry honors room with a balloon, candy and note congratulating me [that] I got in,” said senior Kathryn Aurelio, who as a sophomore was among the last class to have been inducted this way.

Aurelio also recognizes that she will never be on the giving end of those balloons to this year’s new members.

“I feel for them greatly that they won’t have the same element of surprise, but I’d like to tell them they’re deserving of their position in the NHS with or without a formal induction.” she said.

Like with last year’s crop of new members, Oudega said he plans to make the announcement in a more subdued manner — via email in the next week or two.

“Becoming a member of the NHS is an honor bestowed on certain students; it’s like getting an award.” he said. “I’m not happy that we can’t do what we have done in the past.”

To be eligible to apply, students must maintain a minimum unweighted GPA of 3.6 as well as a completely clean discipline record, according to the NHS application. Applicants must also list extracurriculars and community service opportunities.

Besides having to scrap the classroom visits as well as the subsequent official induction ceremony during lunch, Oudega said he had to revamp the paperwork side of the NHS application process.

Before the coronavirus crisis hit last March, the NHS had required students to fill out a hard copy printout of the application that included signatures and initials from adult supervisors in charge of any activities the applicants put down, confirming they had participated in various types of community service or school-related task/position.

The last batch of students who had to do it the old way are now seniors.

“I remember that it was a little tricky trying to get signatures, especially for activities that are individual or in which you led other people, but it wasn’t extremely difficult,” said senior Jack Leydiker, who took around four days to gather all of the signatures and was inducted into NHS in his sophomore year.

Nevertheless, Leydiker isn’t jealous of the fewer amount of work these students have to do now.

“I’m glad that they’ve eased the application requirements because the people applying now have extenuating circumstances due to the pandemic that we didn’t have to deal with,” he said, “It’s great that the NHS is adapting to the current crisis.”

And instead of having to pick up the four-page stapled printout from Oudega’s classroom, the club adviser had to convert it into a digital file and then upload it to a designated Google Classroom, where students could access and turn in the digital or scanned application with a code from a flier sent to their emails. Students could also download the application from the school website.

For the safety and convenience of NHS candidates and teachers, the applications no longer require signatures but rather only the name and either the phone number or email address of the adult supervisor.

Aurelio said she doubts applicants would take advantage of the situation and bulk up their submissions with fake activities.

“I’m sure each new member is well deserving of and understands the integrity and honesty when it comes to affirming their activities without [adviser] signatures.” Aurelio said.

The timeline for the application process has also changed since the pandemic.

For the 2020-2021 school year, Oudega said he opted to move the application pickup and submissions time frame from March a year ago to between Jan. 22 and Feb. 19.

With those applications submitted digitally, the adviser said he and the other five members on the NHS selection committee had to meet over Zoom to choose how many will get inducted vs. the past when the adviser would hold meetings in person.

“Like everything this year we’d rather be doing it the old way, but doing things through Zoom is the next best thing,” he said. “It’s very nice to have a way to recognize and honor [students] for their service, and I’m very excited to do this with a new batch of students.”

With an acceptance range of about 40-50 members a year, the NHS currently stands at 48, 14 of whom are seniors.

Although NHS is different from such groups on campus like Key or American Red Cross Club in that it usually doesn’t hold any fundraisers or conducts any service projects, being a part of the NHS has its benefits for college admissions, as it represents members’ commitment to their studies as well as acts of service, according to the national NHS website.

“While I do miss the rituals and traditions that we appreciated prior to the pandemic, I don’t think that not having a traditional inductee ceremony diminishes the importance of NHS membership.” said Leydiker, who like Aurelio will never be able to carry out the tradition with the balloon distribution since he’s a graduating senior. “Regardless of how you’re introduced to the NHS, the fact that you’re a member means that you’re academically and extracurricular motivated, and that won’t change just because you can’t have an induction ceremony.”