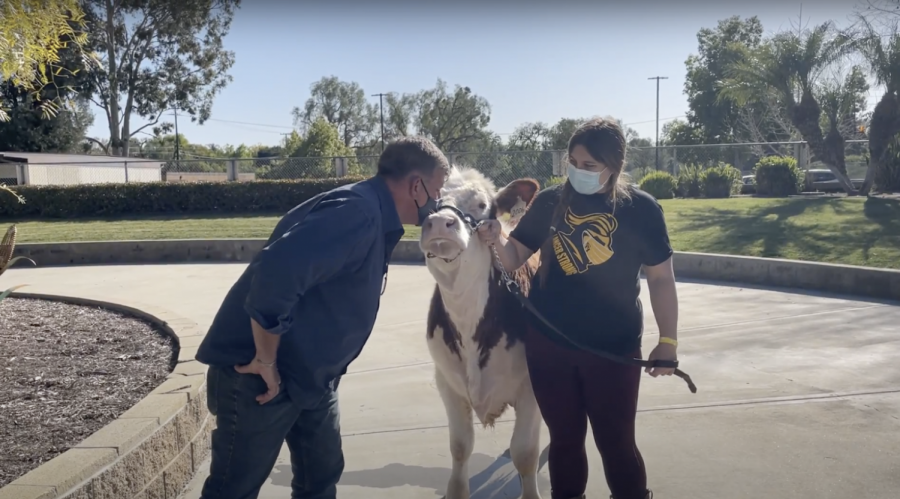 English teacher Randy Oudega (left) leans in to kiss the right cheek of “Tank," who is handled by senior Amy Sorgdrager, on Thursday, Feb. 25. Oudega was chosen by the most students, who voted on a Google Form, to share a special moment with the animal as part of a culminating activity during National Future Farmers of America Week.

English teacher Randy Oudega never thought he would get enough votes from students to be nominated for the honor of a Future Farmers of America [FFA] spring semester tradition: Kiss the Cow.

“Udder disbelief,” Oudega wrote in an email interview, using a cow-related pun instead of “utter.” “I only volunteered because I was certain I wouldn’t win. I’m pretty sure there was some kind of voter fraud going on here.”

Oudega also continued a streak for a third year of English teachers getting the most votes for Kiss the Cow, Cates said.

Students were informed about Kiss the Cow as well as other National FFA Week virtual activities through the FFA’s Instagram page or through teacher emails, the ag teacher said. The Google Form for students to vote for who gets to smooch the animal was opened for around 10 days and closed on Feb. 25 at 2 p.m.

In a pre-COVID-19 situation, Kiss the Cow would have occurred during break in front of a live audience. But because of the coronavirus pandemic with Sunny Hills in a hybrid learning model, the agriculture department decided to hold its finale event to celebrate FFA Week from Feb. 22-26 without an audience — FFA secretary senior Jesse Reyes pre-recorded Oudega giving lip service to the cow’s cheek on Feb. 25 in front of the agricultural buildings at school. Anyone interested in watching the video had to join Cates’ Zoom session that he had set up after school.

Other COVID-19 safety measures — Cates jokingly referred to them as “COWVID-19” — included the teacher having to keep his mask on at all times, even while kissing “Tank” the steer on the cheek, and the 11-month-old animal with a white belly and a brown back getting a good shampoo bath before her video shoot, Cates said.

So the teacher actually kissed a male bovine instead of a cow, which means the event should’ve been called “Kiss the Steer”?

“We say ‘Kiss the Cow’ because it sounds better and because the words heifer, bull and steer are not in the average teenager’s vocabulary,” the agriculture teacher said. “It is easier for us to get people’s attention and requires less explanation.”

Oudega said even though he’s never been so affectionate toward the kine — male or female — this wasn’t the first time he’s had a run-in with such a creature since his dad had owned a farm in Cerritos.

“My father actually made a living milking cows, and my earliest memory is of a cow,” he said. “I also won $1,000 in a cow bingo contest (the cow has to poop on your number to win) at Sunny Hills many years ago.

“Cows have been pretty good to me overall.”

Perhaps not so much his students?

The following Monday, March 1, Oudega had suggested to his juniors that a majority of his AP Lang students conspired to get him the most votes to be selected to give Tank the bovine a smooch on her right cheek.

Junior Jasmine Lee said she acted as the “ringleader” unintentionally and asked six of her peers to vote for her instructor after receiving a Google Form link from her Vet Science teacher, Cates. Despite her informal campaign to get Oudega the most votes, Lee said she was surprised that those six friends were willing to spread the word.

“When Mr. Oudega kissed the cow, I found myself applauding along!” said Lee, who’s in zero period AP Lang and only watched the video after The Accolade had shown it to her.

Another of Lee’s zero period classmates enjoyed the opportunity to see her teacher in a different light than just on a Zoom screen.

“My friend sent the picture of him kissing the cow, and it was really funny,” junior Yeonji Baek said. “I thought it was really cute how Mr. Oudega had his hands on his hip.”

FFA vice president junior Sophia Winters said she had a chance to watch the video release.

“It was funny,” Winters said. “The cow seemed ‘nervous’ for her first kiss.”

Oudega offers this advice to the next “victim” to kiss the cow:

“Wear a mask, quarantine or not.”

Besides Kiss the Cow, agriculture students celebrated FFA week virtually instead of showing up on campus during break with various farm animals on display like in the past.

Through a Zoom meeting during break, FFA members played Among Us, Pictionary and Guess the Mystery Singer with the FFA members who joined the Zoom session.

“It was really fun. There was a lot of participation in our games at break,” Winters said. “I also enjoyed working with my fellow officers to bring the whole week together and make it run smoothly.”

While many of the past events had to be scrapped because of the coronavirus pandemic, Cates said he wanted to keep the Kiss the Cow tradition going since it has a nice alliteration to the title as well as illustrating some Sunny Hills traditions.

“We hope that the student body here at Sunny Hills has enjoyed a light heart week of agriculture education,” Cates said. “We wanted to showcase what the FFA was about and show all of Sunny Hills the future of the industry that will feed them.”