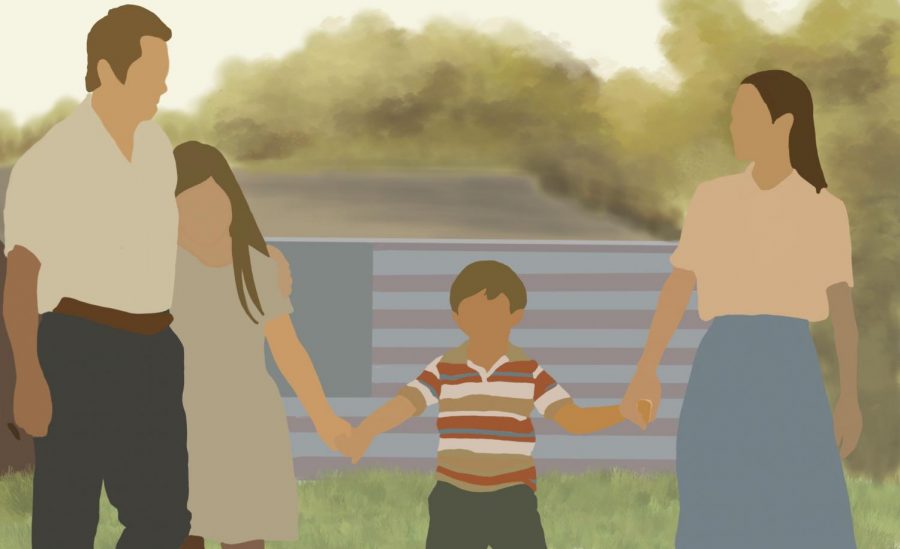 An artist’s rendering of a scene from the film “Minari,” where a Korean American family moves to an Arkansas farm in hopes of achieving their American Dream.

Raised by South Korean immigrant parents in America, my ethnicity is naturally Korean American; growing up as an ethnic minority, my cultural identity largely defined who I am.

When watching American or Korean culture on television, I found myself feeling connected to both sides, but at the same time, not relating to either of them. In a way, it was a cultural identity crisis: not fitting in one or the other but falling somewhere in the middle.

Despite being born in America, I spent my early childhood in South Korea until the age of 5, when my entire family first moved to permanently live in the States. Although the city my family settled in was Fullerton, which had a relatively high population of Korean Americans, everything about the new home felt foreign.

Therefore, one film in particular — “Minari,” the semi-autobiographical film of Korean American filmmaker Lee Isaac Chung (“I Have Seen My Last Born”) — hit close to home . Based on the director’s childhood experiences, the film tells the story of a Korean immigrant family settling in Arkansas to start a farm in the 1980s, mainly from the perspective of the 7-year-old son, David (Alan Kim), who represents Chung himself.

Many of the moments David goes through throughout the movie overlaps with my own experiences; I see my past self in this character as he watches his parents work hard to achieve their versions of the American Dream. Like the young protagonist, I struggled with adjusting to the new environment and unintentionally making efforts to become culturally more American.

Perhaps, it was the misconception at a young age that I must categorize myself as American or Korean instead of appreciating my ethnicity for what it truly is. This might be the case because ethnic minorities like myself rarely find or see ourselves in the media or in pop culture.

This is why “Minari” is such a blessing for me and other Korean Americans.

Never before have I ever felt so represented or understood by an on-screen performance. For the first time in an American movie, I saw people who look like me, people who speak like I do in both Korean and English and people who went through the struggles my family did when we first immigrated to America.

As I watched the 7-year-old character face difficulty engaging in a strictly English conversation, I recalled my days learning and practicing the then-foreign language. As for the scenes where David complains about his “too Korean” grandma, these were moments I could find in my childhood experiences as well.

“Minari” not only brings me sentimental memories about my immigration experiences, but once again teaches me what it means to be a Korean American.

It reinforces the idea to have pride and love for my own culture — a lesson all people must engrave in their hearts.