Boys water polo loses its first game of the season against Fullerton on Wednesday, March 3 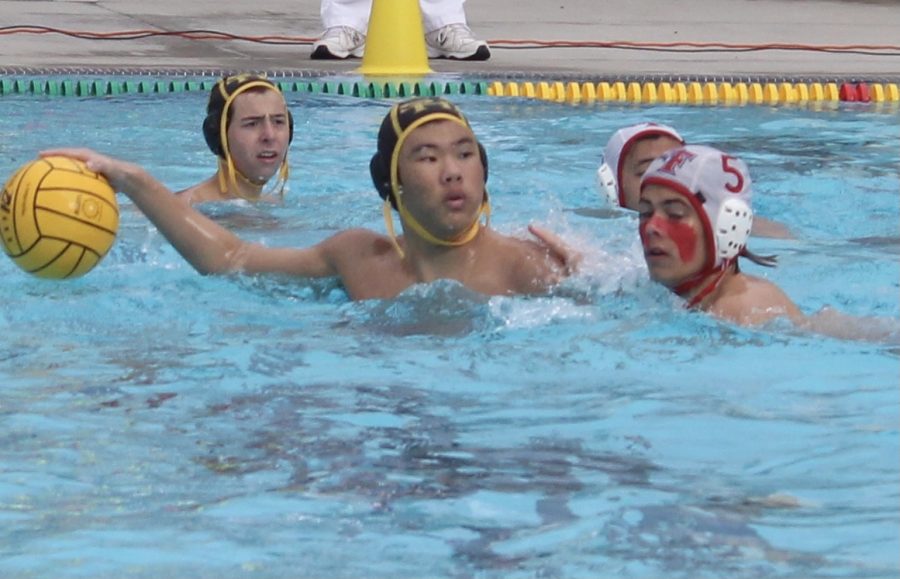 Sunny Hills utility player junior Andrew Lee looks to pass the ball to one of his teammates during a Wednesday, March 3, home game against Fullerton Union High School. The Lancers lost their first game of the season 17-4.

In its first dive into the 2020-2021 season, the Sunny Hills boys water polo team faced a challenging opponent in Fullerton Wednesday, March 3, faltering in the second half when the Lancers’ defense failed to stop a barrage of goals by the Tribe.

“It was our first game, so we were rusty,” goalie senior Josh Beutter said. “We 100% need to work on our passing. If we don’t improve on passing, we’re not going to be able to win any games.”

After the Tribe beat the Lancers in the opening sprint to reach the ball, Fullerton began wearing down the defense, ending with a goal just within 20 seconds of the quarter. Two more scores from Fullerton later, the Lancers got on the scoreboard at the 3:06 mark of the first quarter when utility player junior Elijah Vera scored from a lob shot center cage.

Despite losing the season opener 17-4, Beutter made some critical saves throughout the first quarter, keeping the game close.

“Josh is a tremendous goalie and really kept us in the game,” head coach Keith Nighswonger said. “In the first quarter, it was only 3-1, and it was mainly because of what he was doing in the goal.”

After two back-to-back goals from the Tribe’s offense, utility player senior Kyle Lee changed the tide in the second quarter, scoring two goals from within five meters — one of the two coming after a cross-cage assist from Vera.

“Honestly, [my goals] didn’t really matter,” Lee said. “I was just happy we had something going for us.”

In the third and fourth quarters, the Lancer defense could no longer hold off the Tribe as Fullerton racked up nine more points with only a single goal coming from Lee in the fourth quarter.

Despite the loss, Nighswonger said it was obvious from the score what area his players will need to work on.

“We didn’t play good transition defense, and we’ll have to go back to the drawing board on that one,” he said. “We need to try to be more organized defensively, and we’ll keep working on that.”

Parents and families spectated the game from the bleachers while maintaining a six-foot distance throughout the duration of the game. Two spectators were allowed per water polo athlete and the administration diligently monitored the audience.

While Lancers did not have to wear a mask in the pool, they were required to wear one while sitting on the bench. Both boys’ levels had full rosters.