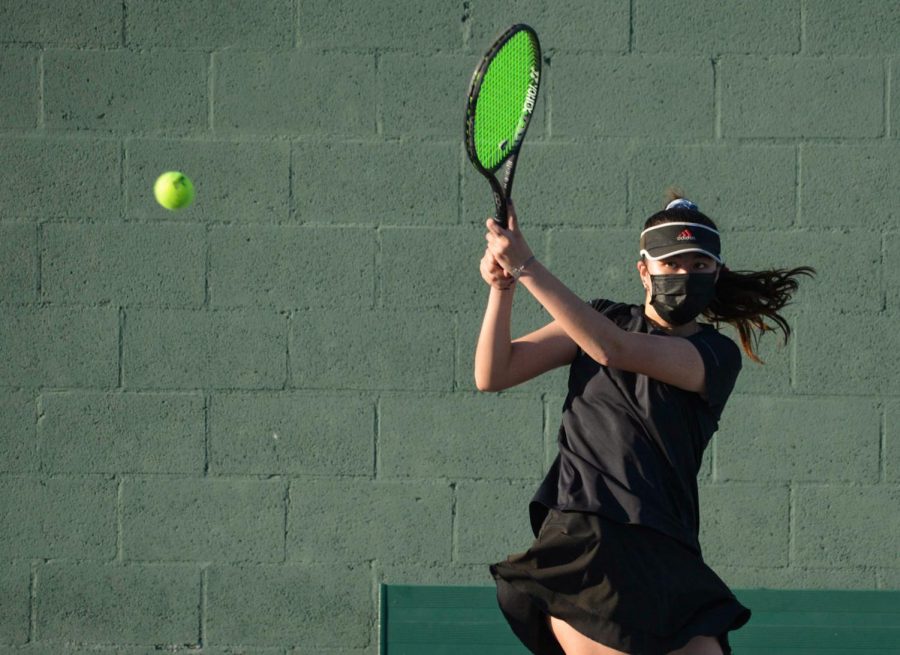 No. 2 singles player junior Nataljia Glavy hits a backhand during a Tuesday, March 2, match against El Dorado High School. Glavy won all three of her sets by the scores of 6-0, 7-5, 6-0, contributing to the Lady Lancers’ 73-71 victory.

While the Sunny Hills boys tennis team easily disposed of El Dorado in the Lancers’ season opener at home, the Lady Lancers had a more challenging time against girls tennis players from the same school on Tuesday, March 2.

Upon both squads tallying nine total wins in sets, head coaches from both sides had to follow California Interscholastic Federation [CIF] tiebreaker guidelines by adding up the points scored in each set played by each squad’s singles and doubles players. That total amounted to 73 for the Lady Lancers and 71 for the Golden Hawks, giving the non-conference victory to Sunny Hills (1-0).

“My expectation going into today was that we were going to be rusty, which we were,” said Lady Lancers head coach Christopher Ghareebo, who also oversees the boys tennis team. “But because of [the rust], I am not disappointed with some of the mistakes we were making.”

In keeping with COVID-19-related health and safety guidelines, masks and social distancing were required among all athletes on and off the court during all of the matches. No spectators attended with only players watching to cheer on their teammates.

No. 1 singles player junior Carolyn Tran didn’t show the rust that her head coach had mentioned about his players after the match, losing only two points in the first set she played and then shutting out her last two opponents.

“It was kind of nerve-racking because it was the first game of the season, and I felt the need to win because we want to start off on a strong note,” Tran said. “I think I should have been more relaxed and less tense, and I felt that could have made it a less stressful win.”

“I am really proud of how I fought through the matches today,” Glavy said. “When I stepped out onto the court, I don’t really remember much except for telling myself to calm down and just get the ball in the court.”

Glavy said she wants to improve her backhand and work on her mental game.

“I want to stop worrying so much and have anxiety, but rather just go out and have fun because tennis is supposed to relieve stress, not cause it,” she said.

Ghareebo said it was amazing to see his boys and girls tennis players back out on the court.

“El Dorado was a very formidable opponent [for us] and evenly matched, which is what we want in a preseason game to test our skill and to get better,” he said. “I loved it. It was great to see the team back out there ready to play and smiling again.

“It is a privilege to be out here playing.”

Ghareebo remains optimistic for what this modified season has to offer — a season in which boys and girls tennis squads are playing at the same time (usually, the girls play in the fall semester, while the boys play in the spring).

“We are just trying to fit the pieces in the puzzle today and figure out what is next,” he said. “I am just very pleased that we are playing our hardest, and our effort is very much there through both our boys and girls programs.”

Like with what happened to the Sunny Hills cross country program, the Lady Lancers had to forfeit one junior varsity doubles match because of a lack of players.

“We have a few injured players that are coming back soon we are just trying to grind through it until we hopefully get everyone back so we are doing the best we can,” Ghareebo said.

The Lady Lancers will next take on Orange Lutheran March 9 at home at 3 p.m.