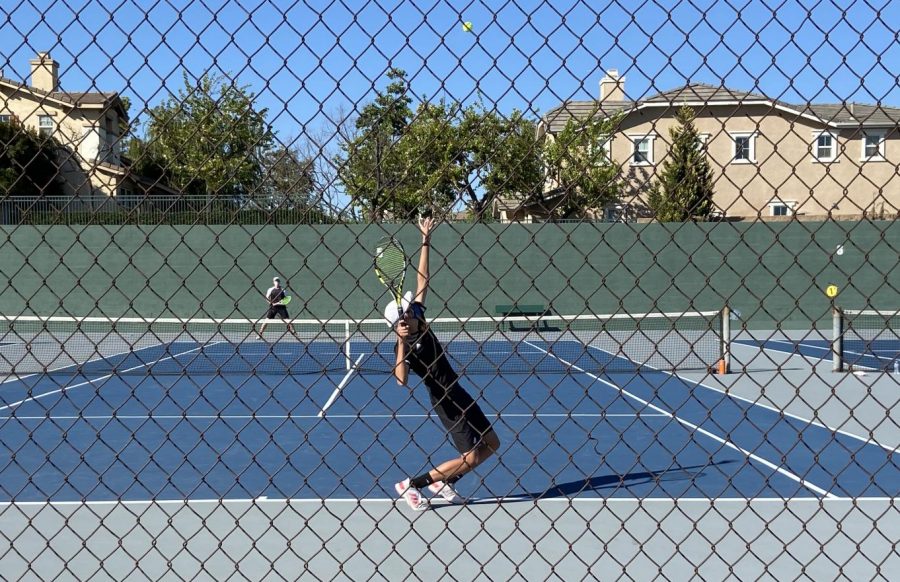 Despite the lack of team practice time on campus because of the coronavirus pandemic, the Sunny Hills boys tennis team easily dismantled its first opponent of the season, dominating El Dorado in a March 1 home match, 14-4.

Besides the victory, the Lancers also became the second sport on campus this school year to compete against an opposing squad, following the boys and girls cross country teams, which first competed in a home meet against Buena Park a month ago.

The team did not have to forfeit any matches for both the varsity and junior varsity levels as there was an adequate number of players. Only competing athletes were allowed on the courts and all players were required to wear a mask throughout the duration of their matches.

“[Today’s game] went terrific,” head coach Christopher Ghareebo said. “It’s good to get our first match on our way, and it’s a good sign that even though we are not playing our best tennis, we are able to win and win comfortably.”

Ghareebo was referring to the four points his players gave away to El Dorado, one of them coming from a 4-6 loss by his No. 1 singles player, sophomore Owen Taylor against El Dorado’s No. 2 player Ryan P.

“I was a bit nervous, but mostly I was looking forward to playing again,” said Taylor, who made his debut on the SH team Monday after his freshman season was canceled. “My first match [6-2] was pretty good, but I didn’t do really good in my second match. I definitely need to work on my forehands and volleys.”

No. 2 singles player sophomore Carson Lee won his first match of the season against El Dorado’s No. 1 singles player, Nathan Chung, shutting Chung out 6-0; in fact, Lee didn’t struggle much at all as he ended his two other sets with the same score as the one against Chung.

“The game went pretty well,” Lee said. “I did not experience any hardships throughout my games, and I think our season this year will go well, although it depends on how we do.”

Like with Lee, the Lancers’ doubles teams came out strong and accounted for nine of the Lancers’ 14 points in a clean sweep of the Golden Hawk’s doubles squads.

“Regarding how me and Ethan did, I think we did great winning both of our games, and it feels good to finally be playing matches against schools again after a year or so,” No. 1 doubles player junior Enoch Chung said. “We worked together by continuing to play positive even though we would drop points.”

With the squad’s second match coming up Friday, March 5 against Bolsa Grande at home, Ghareebo said he plans on having athletes focus on consistency drills and getting back in shape during regular practices to allow them to make up for their mistakes against El Dorado.