“Fate: The Winx Saga” disappoints previous Winx Club fans with a failed execution at a revamp 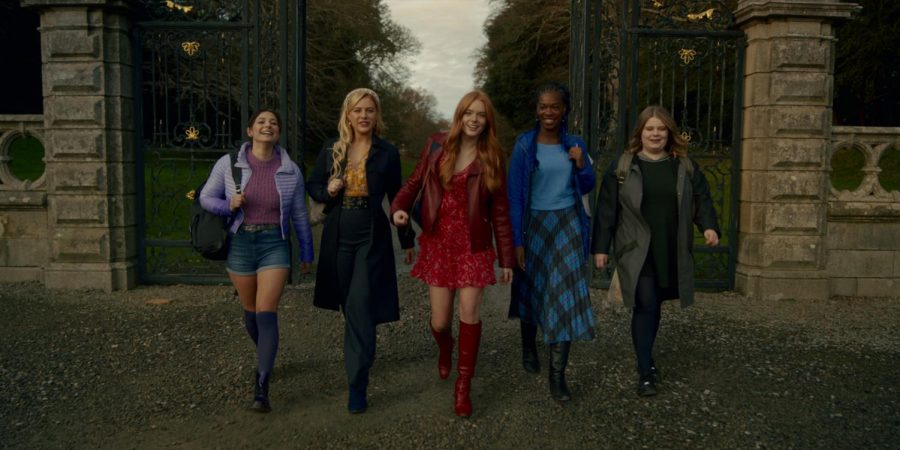 Image posted with permission from Netflix

The Winx Club fairies -- Musa (left), Stella, Bloom, Aisha and Terra -- walk through the gates of Alfea, a magic school for fairies, after returning from a trip to Earth. The Netflix series was released Jan.22

Serving as the ultimate disappointment for Winx Club fans, the newest addition to the Winx franchise does more damage than good in the world of magic and fairies.

In a flopped attempt to revamp the iconic children’s show “Winx Club,” “Fate: The Winx Saga” fails to live up to the preceding standards of the 2004 original, resulting in a cringeworthy, young adult rendition of the fantastical drama series.

Released on Jan. 22, the Netflix-based show consists of one season with six, hour-long episodes following the tale of Bloom (Abigail Cowen, “Chilling Adventures of Sabrina”), a 16-year-old girl who enters a new world after recently discovering her identity as a fire fairy. Upon her arrival at Alfea, the school for fairies, Bloom and her roommates face a series of trials regarding new friendships, romantic endeavors and monsters called the “Burned Ones” that threaten their very existence, — a similar plot structure as the original.

The protagonist enters Alfea as a complete newcomer to a world of magic after living her entire life on Earth. Despite this, Bloom’s consistent ignorance toward the advice given to her by those more knowledgeable acts as the main catalyst to most, if not all, of the conflict in the series. The fallibility of her character makes it difficult and frustrating for the audience to watch as Bloom consistently gets herself stuck in self-induced problems.

Not to mention, the rest of the cast has inherent qualities that make them unlikeable, such as a judgmental light fairy named Stella (Hannah van der Westhuysen, “The Bay of Silence”) and a tactless earth fairy named Terra (Eliot Salt, “Normal People”).

Though this allows for some character development, it contributes more toward an inconsistent pacing of the relationships between the main characters; the series begins with all five roommates disliking each other — primarily because of their flawed personalities — to an immediate close bond by the end of the sixth episode, despite the lack of any real catalyst for such change.

Prior to its debut, the show received backlash because of the whitewashing within the cast. While the original Winx Club showcased a variety of skin colors and ethnicities ranging from Asian, Hispanic and Black characters, the live action version disappointed with a dominantly white cast.

Not only did the lack of diversity create a cast of characters foreign from the original series, but those behind the show failed to consider the potential contributions they could have made to the predominantly white film industry. This resulted in unfamiliar characters for returning viewers and another case of unfortunate whitewashing in television.

Another perceived fault of the show surrounds the lack of “fashionable” clothing from the characters. The original Winx series’ attention to the girls’ clothing choices made the show known for their trendy and stylish outfits. The live action fails to achieve this with its duller and arguably archaic outfits.

While the original show had the fairies sporting well-fitting, colorful and bright outfits that each aligned with the fairies’ personalities, the remake gives little effort with their uninspiring fashion choices. For instance, almost all of Bloom’s outfits have elements of the color red, a boring attempt at reiterating the protagonist’s identity as a fire fairy.

Though arguably a more insignificant criticism, the tacky clothing better suits middle-aged women rather than a group of teenagers.

Additionally, though the show depicts the characters as teenagers, the actual cast looks much older with the actresses of the five main fairies having an average age of 24 years. This unrealistic portrayal of teens and inaccurate casting creates a jarring experience for those watching the show with the expectation of seeing a more realistic cast.

Despite its flaws, the series does accomplish transitioning the Winx franchise to accommodate a young adult audience rather than targeting a children’s show. With vices like alcohol and drug use on clear display to the blood and gore from violent scenes, the (TV-MA) Fate series clearly distinguishes the show as one fit for a mature audience.

However, the scenes depicting sex and drugs does little to advance the plot and serves as an unnecessary and ineffective B plot to a show about fairies fighting off monsters in the woods. The reboot pushes for a cliche, teenage angst version of the original, but the show would have been more familiar to viewers without the integration of teenage vices, keeping the tone more child-friendly.

Had the show gone by a separate name or franchise, the publics’ reactions would have been much more tamed; since much of the criticisms stemmed from the failure to reach the expectations of the original show, the plot and characters would have been appreciated more without the comparisons.

Ultimately, though the show attempted at rebranding the franchise with a more grown-up aesthetic, its perceived faults came primarily from disappointing Winx Club fans with the series’ mediocre cast and failed expectations. With its shoddy shot at a real-life remake, perhaps “Fate: The Winx Saga” should have stayed in the drafts rather than ruining the valued childhoods of many.