Senior class president organizes off-campus, non-school-sponsored Senior Sunrise next month in Brea after traditional October event is canceled because of the coronavirus pandemic 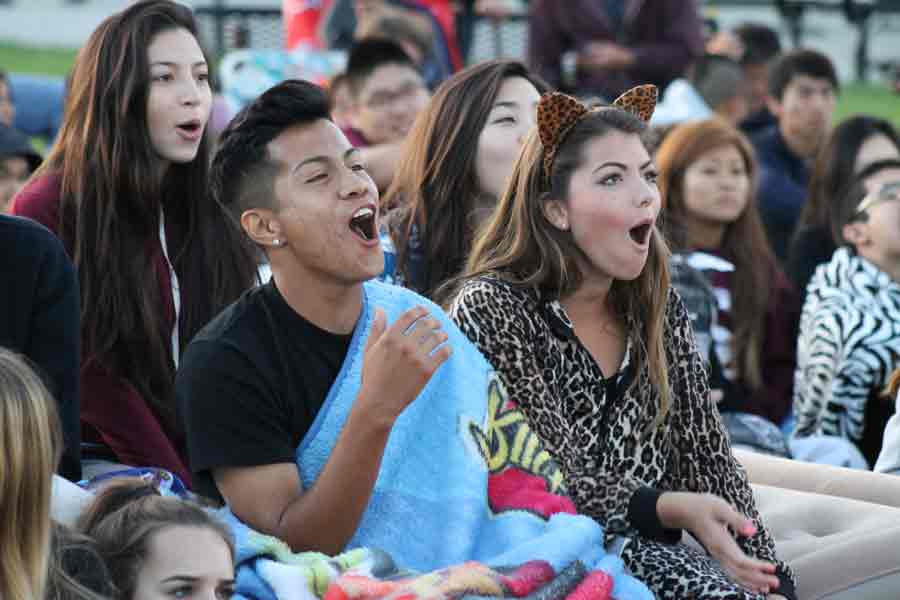 Class of 2014 students react to the movie they were watching in the Sunny Hills quad during the Oct. 3 Senior Sunrise, considered the first traditional senior event of the school year. The Class of 2021 will be the first to not be able to have one because of the coronavirus pandemic, which has caused all Associated Student Body on-campus events to be canceled in the fall semester. Some seniors, however, are working on organizing an off-campus gathering that's not school sponsored to be held on the roof of a downtown Brea parking structure at 375 West Birch St. on an undecided Friday in March.

With the first traditional senior event of the 2020-2021 school year — Senior Sunrise — getting the ax because of the coronavirus pandemic, some students are working on a free, alternative non-Sunny Hills sponsored gathering to be held off-campus next month before the start of classes.

Traditionally, the fall semester get together — organized by the Associated Student Body’s [ASB] senior class cabinet and its senior class adviser, English teacher Christina Zubko — gives 12th-graders the opportunity to come to the school’s quad early in the morning before zero period around 5 a.m. Because of the cold weather, students often brought thick blankets, while ASB officers offered hot cocoa or coffee for sale.

For an admission fee of between $10 and $15, Senior Sunrise would have as its main feature seniors watching a movie on a big screen like the jumbotron while eating their breakfast; the film would have been previously voted on by the senior class.

“In the past, I worked with the senior cabinet and was just there to steer them,” said Zubko, who is aware of students’ attempts to hold a similar event off-campus on their own. “Our school is taking direction from the Orange County Department of Education and their safety plan, and now our school can’t do [Senior Sunrise] on campus.”

Because of this information Zubko received in March, four seniors who also happen to be in the ASB senior class cabinet are spearheading the organization of an independent drive-in get-together on the roof of a downtown Brea parking structure at 375 West Birch St. on an undecided Friday in March, said Emma Suh, who’s also the ASB’s senior class president but is acting outside of the ASB to put the event together.

The senior said school officials have allowed for her and her ASB members to unofficially host and advertise the event so long as it is clarified that the Sunny Hills administration has no affiliation with it.

So far, Suh said she has contacted property owners around Brea’s parking structure as the prime location where she plans to bring a video projector to show a movie.

“I’d thought a parking structure would be a unique place to have a Senior Sunrise and a nice change of scenery,” the senior said. “Though we would’ve liked to have it at school like the [school-sponsored] Dancing Under the Stars event [last December], we don’t have the exact logistics of how many people are coming and at this point, the school is not willing to risk being responsible for students if they get sick [from the coronavirus].

“It won’t be the same as having a giant jumbotron, but at least it’ll be something,” she said. “It’s a good chance to talk to each other.”

Despite this being a non-school-sponsored event, Suh said COVID-19-related health and safety precautions would be enforced such as temperature checks with handheld infrared thermometers, mask requirements, social distancing regulations and recommendations that students stay in their cars.

“Though it is a drive-in, considering some of us wouldn’t have seen each other in such a long time to socialize, it’s probably better for us teenagers to have an event to meet up with each other in a safe way,” she said.

Suh said she plans to promote the casual meeting through social media posts and stories on unofficial accounts on Instagram such as the senior class page @sunnyhills2021 instead of the official Sunny Hills ASB account.

“Hopefully, once we release the online flyer with a date and advertise on social media, we’ll get around 50 people [to attend],” she said.

Sunny Hills staff members are hesitant to embrace the idea of an unofficial Senior Sunrise over safety concerns.

Though she was aware that planning for the unofficial event had already been set in motion since October, Zubko said she is still concerned about the possible ramifications in the midst of a pandemic.

“I think it’s great that [Suh] is being innovative, but I just want everybody to be safe,” she said. “In addition to that, Senior Sunrise has become a notorious ditch day, and teachers are pretty fed up.”

ASB co-adviser Mike Paris, who found out about Suh’s plans in September, did not disapprove of the senior class president’s actions.

“The most important part of this would be that people understand it is not a school event,” Paris said. “Emma is just discussing possibilities — she would have to follow any distance restrictions in place anywhere, though none of us know the restrictions that will be in place in March.”

Principal Allen Whitten said he first found out about Suh’s efforts late November in a meeting with the senior in which Suh relayed the basic details of how the event would proceed.

“If students are doing anything [off campus and non-school sponsored], I would say, ‘Follow all the guidelines that keep us safe,’” Whitten said.

Parent Teacher Student Association’s Grad Nite committee chairwoman Jennifer Nece, who’s also working on finding an alternative venue for the senior class in May after the Disney Resort canceled Grad Nite at Disneyland for a second consecutive year because of the coronavirus pandemic, declined to comment.

Suh’s parents similarly have their own concerns about health and safety in hosting the event but still show support for their daughter to move forward with her plans.

“As long as she wears a mask and social distances to keep herself and others safe, it shouldn’t be too much of a problem,” said Suh’s mother, Jennifer Ko. “We trust her enough that she can make her own decisions responsibly.”

Some seniors say they’re willing to convince their parents to allow them to attend a rooftop gathering since they have already lost their traditional Senior Sunrise on campus.

“Even though it would be an event where everyone is in their cars, it’s still a way to socialize with others in a safe way,” senior Ray Hong said.

Senior Suhani Kakaria said she first found out about Suh’s off-campus event through The Accolade and since then, she has been eagerly anticipating it as part of her senior experience that’s been shattered because of the coronavirus pandemic.

“I love the idea, and I could get permission to go, and I think it’d be better if it was held on a school day because it’s tradition,” Kakaria said. “Obviously, it sucks that we can’t do all the things we’re supposed to as seniors, but it is what it is, and we have to make the best of what we have.”

Other seniors, however, are more reluctant about asking for their parents’ permission to attend the drive-in because of ongoing concerns over the spread of the coronavirus despite many who have already received vaccinations.

“The idea sounds nice, but isn’t the pandemic still a thing?” asked senior Jessica Garcia, who only found out about Suh’s plans for the first time through The Accolade. “I’m indifferent about [attending], but my parents are pretty worried about catching the virus, so they might not allow it.”

Despite all of the planning, Suh said the only thing that could derail her alternative Senior Sunrise is if Orange County remains in the purple tier with an escalating amount of positive coronavirus cases within the area next month.

“Hopefully, we’ll have it in March,” she said.