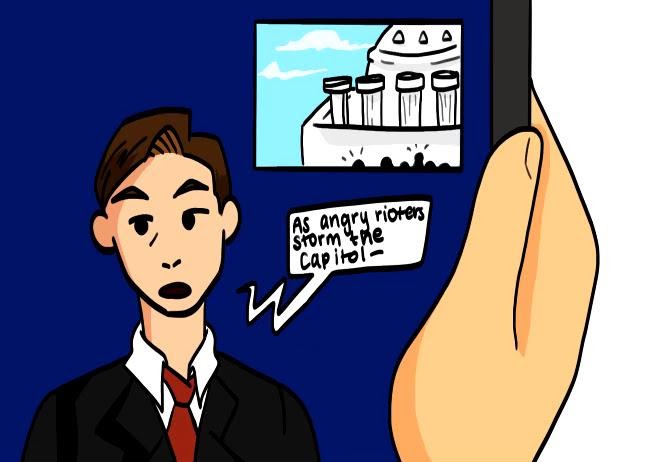 The Accolade Editorial Board

The Accolade’s editorial board count: 10 believe media organizations carry more responsibility to provide unbiased information, while 6 believe the audience carries the most responsibility in staying informed and fact-checking the media they consume.

Before officially joining The Accolade, all writers must take and pass with a B or higher in the beginning journalism class.

The Journalism 1 [J1] course not only covers the fundamentals of news writing, but also the legal aspects of the business such as libel, invasion of privacy, First Amendment rights and scholastic press rights.

But most importantly, J1ers learn to remember Joseph Pulitzer’s mantra for every story they write: accuracy, accuracy and accuracy.

In light of today’s charged political atmosphere and the events at Capitol Hill on Jan. 6, we, as student journalists, must recall that theme more than ever.

Words from our leaders and media sources carry meaning and consequences. As readers, we must filter what we hear and read. But ultimately, the media hold the greatest responsibility to provide the people information with the least amount of bias — excluding opinion pieces — so the people can interpret it themselves.

According to AllSides, a website that presents media sources in a balanced way through “multi-partisan, scientific analysis,” BuzzFeed News, The New York Times’ opinion section and Huffington Post, among others, present news and opinions from a liberal political perspective, while the Daily Mail, Fox News’ opinion section and The Federalist are among the news sources with content from a conservative standpoint.

Of the left- and right-leaning platforms, only 10 fit AllSides’ criteria of a centered political perspective; among them are The Christian Science Monitor, National Public Radio’s news content and Reuters.

For readers looking for unbiased information, this stark disparity between the number of politically leaning and politically centered outlets only disorients readers in their search for unskewed information.

According to Allsides’ scale, BuzzFeed’s news section lies heavily on the left side.

BuzzFeed’s 2020 diversity update reveals a diverse staff of 57.53% who self-identify as white, 37.5% who identify as a person of color — Black, Asian, Latino or Hispanic, American Indian or Alaska Native — 61.9% who identify as a woman and a 9.5% statistic of people overall who “have actively identified as a part of the LGBTQ+ community.”

“This breakdown is … often more diverse than peer companies in the media and tech industries who have publicly released their data,” according to the update.

Although social media sites aren’t listed on AllSides’ scale, today’s teenagers get their main source of news from social media like Instagram, Snapchat and YouTube instead of accessing information directly from news organizations like a CNN, Fox News or the Los Angeles Times, according to a 2019 survey from Common Sense Media.

This statistic may expose social media news sources as a force preventing students from staying vigilant, especially when these sources feed them left-leaning or right-leaning content depending on their political preference.

The culprit here may be social media algorithms.

“Some technologies risk repeating the patterns developed by our biased societies,” said Adam Mosseri, the head of Instagram, on a June 15, 2020 article on the Instagram blog titled, “Ensuring Black Voices are Heard.”

“While we do a lot of work to help prevent subconscious bias in our products, we need to take a harder look at the underlying systems we’ve built, and where we need to do more to keep bias out of these decisions.”

With this algorithm, Instagram feeds its users with content catered to people’s political beliefs, making the active search for accurate information all the more difficult.

Because no news media outlet can present information totally without bias, readers do possess a responsibility to become mindful, informed readers. Ideally, readers should analyze the news proactively and combat their cognitive dissonance when news sources disagree with their political view or their perspective of the truth.

However, news organizations cannot assume that students will spend time fact-checking the content they encounter. Because of this, the responsibility begins with the source of information: the media.

Even if media like television stations and radio broadcasts don’t have as young an audience as Instagram news accounts, they must be mindful of the biases in their reporting to prepare for the younger generation, while also providing credible information for many students’ parents who tune in to these sources.

At The Accolade, we will continue to persist in bringing news to our readers — news with as little bias as possible, while keeping our personal viewpoints in the Opinion section.