Game Ball: Senior softball player travels from coast to coast pitching in for her teams in Virginia, California 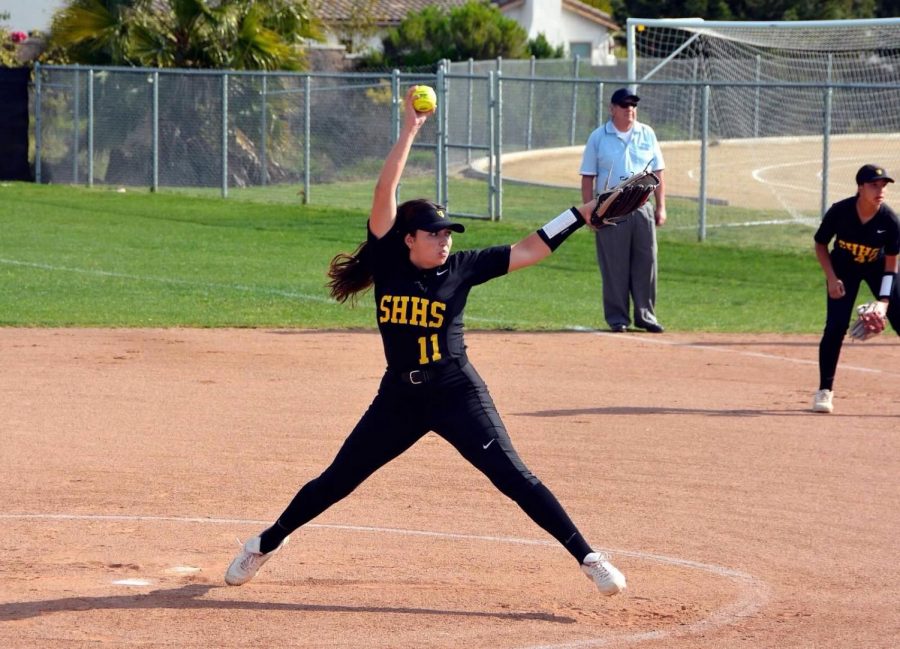 Image used with permission from Will Suh.

Then-junior Abbie Landrum pitches in an 11-4 win against Tesoro at Sunny Hills High School on March 7.

During her sophomore year, senior Abbie Landrum had an essay assignment related to the novel Fahrenheit 451.

Unfortunately for Landrum, the essay was due as soon as her plane touched down at the Los Angeles International Airport from Virginia, where she played as a pitcher for Team Virginia Mizuno, a club team located in Virginia Beach.

Her only solution was to write it during her flight.

“It was quite stressful because it is loud on planes, and there are people next to you,” Landrum said. “It was hard to focus at times, but I did finish the essay.”

Not only does Landrum play for a club team in Virginia, but she also bounces between the West and East coasts since she participates in two club teams.

Her softball journey began with her parents, both of whom played the sport when they were younger and signed her up at 5-years old, Landrum said.

July 2018 was the first time she was offered the opportunity to play for different club teams on opposite sides of the country, she said.

Landrum was with the California Cruisers in Rancho Santa Margarita when she pitched against Team Virginia Mizuno in Atlanta at a showcase tournament.

After playing against Team Virginia, one of the coaches from that team offered her the chance to pitch for them one week later at a national tournament in California.

“I love it,” said Landrum, who plays pitcher and third baseman. “It is a new opportunity and only great things can come of it in my eyes.”

In California, she said she left the California Cruisers to join the Firecrackers Lutterloh King in Rancho Santa Margarita in August 2019. Then three months later in November, she joined the Irvine Sting Club.

“My previous California club teams just were not the right fit for me,” Landrum said.

Although the responsibility of juggling two club teams on both coasts seems difficult, her parents encouraged her decision.

“My parents are fully supportive of me playing across the country,” Landrum said. “They absolutely love it.”

“I think Abbie traveling to Virginia is awesome,” Fuller said. “It is a great opportunity for her, and I know how important it is for her. She is literally the hardest working person I know.”

As a result of playing in another state, she gained interest from local Virginia colleges and has become familiar with the surrounding area.

“I am definitely looking forward to going to school back there if I get an offer,” Landrum said. “The girls and the bond that we have created is so different and something that I never experienced before.”

Despite the rewards, the responsibilities have felt overwhelming at times, she said.

“It is an emotional and mental sport,” the softball player said. “Sometimes when you screw up or have a bad practice, it is really hard not to get worked up toward yourself.”

But she said that she can strive through the obstacles and pick herself up.

“It is a sport designed to make you fail, but it depends on how mentally tough you are and if you can pick yourself up,” Landrum said. “Sometimes you feel lost, and I think that it is OK because you can come back up the next day and feel perfectly fine.”

And her grade on that essay she wrote on the airplane?