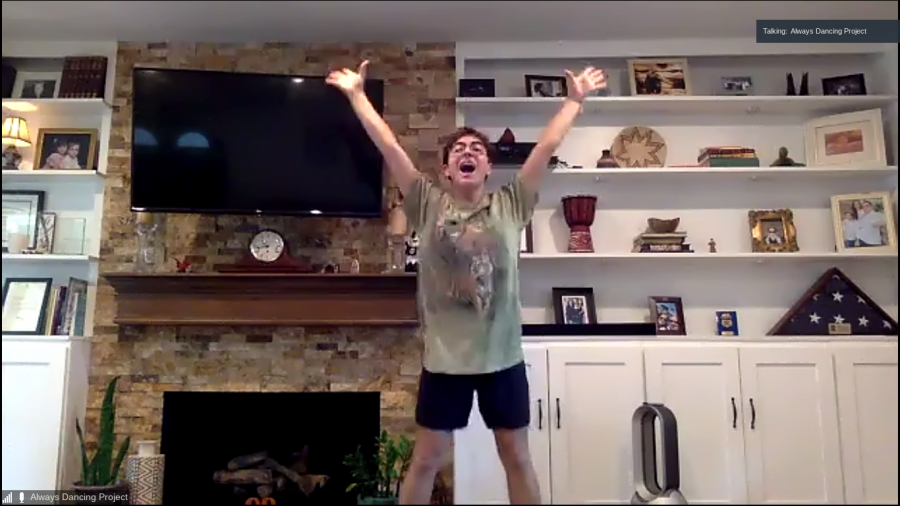 Image used with permission from the Always Dancing Project.

It’s called the Always Dancing Project. But for the 150 kids with such disabilities as cerebral palsy, down syndrome and autism, they are learning to do much more than that.

For two sisters in the program for children up to 3 years old, they figured out how to show the thumbs up sign for the first time. Older kids in the 4-7 age range clap their hands, reaching and turning around.

In the 8 and up group, they are acquiring hand-eye coordination skills while Disney tunes like “Under the Sea” from “The Little Mermaid” play in the background. They cross their arms across their chest, hug their stomach and reach their arms out.

“[Special needs children] are like everyone else and everyone needs to get exercise and get their bodies moving,” founder senior Elliana Kim said. “[But at Reimagine,] I learned how to interact with them, talk with them, be more empathetic, be an advocate for them and in general just things about the community as a whole.”

In seventh grade, Kim volunteered her summers at Reimagine, an Orange-based group formerly known as the Rehabilitation Institute of Southern California.

Nearly five years later, the senior organized the Always Dancing Project over the summer when the COVID-19 pandemic forced her to stop her volunteer work.

“Because I’ve been volunteering with Reimagine, I built a relationship with children with disabilities, so I want to help them, and I want to take my love for helping them and my love for dance and combine them together,” Kim said.

Since she launched the project in June, it has attracted around 150 customers — all receiving free dance lessons three days a week through live Zoom presentations from Kim and seven other high school dancers she has recruited from her club, Recognize. Accept. Dance. [RAD], and the Sunny Hills Dance Production program she’s also a part of. The project has also expanded to include a board of two directors who manage marketing.

“Although it’s easier with my teachers and managing choreography in the beginning of the month, it’s still hard on the business side sending out emails, running the social media [accounts], marketing, updating the website and making sure that everything is still going well,” Kim said.

To house all the information about her classes, she created a website that summer through Google Sites as well as a digital poster in English and Spanish with help from fellow dancer senior Melina Rodriguez.

“Our mission is to provide free dance classes to children with disabilities through Zoom,” according to the website. “In these uncertain times, we hope to bring joy to a child’s day through dance.”

To come up with appropriate class times, she contacted Orange County’s Reimagine early intervention specialist Angie Medina. Then, she recorded choreography videos from nursery rhymes and Disney songs for her instructors to teach as warm-up stretches and dances, as well as written instructions for the teachers.

Although Burn has worked with disabled children before and has experience teaching younger kids and choreographing for Dance Production, he still felt nervous before instructing his first class for the Always Dancing Project, one for children ages 8-12 and above.

“I was a little nervous that nobody would show up, but honestly it’s super impressive that even one person showed up,” Burn said. “I was a little nervous on communicating with them, but I got super lucky with my first girl because she was super excited about it and super responsive, so it wasn’t too much of an issue.”

After that class, he held his second one on Sept. 19, a class also for special needs kids ages 8-12 and above. For that, only one person attended again.

To begin, Burn led the boy in stretches standing up, rolling their head around slowly, bending their knees and lunging. Then, they moved to the floor and sat in a butterfly position with their feet touching and knees pointing outward. At this point, the student angled his camera down so Burn could see his stretch.

After stretching, he led the student in a dance to the chorus of “Under the Sea” from Disney’s “The Little Mermaid.” They clapped, looked around, crossed their arms and did a scuba dive move holding their nose and bending their knees.

Although his student didn’t respond to Burn’s questions, Burn kept smiling through the camera and encouraging him.

“Some of the questions could be a little bit too complex for them to comprehend, which is OK,” he said. “They’re just there to dance, so if they don’t answer a question, that doesn’t really bother me; I’ll just move on to dancing or asking another question.”

After around two months after Kim started the program, her mom nominated her for a feature on ABC7 Eyewitness News’ “SoCal Strong” TV segment to support what Kim wanted to do.

So on Sept. 2, she was featured on television for her efforts during a pandemic to give special needs children the opportunity to dance along with Medina and two students who attended her class.

“I was so excited and surprised because I didn’t think I would get it,” Kim said. “I was also grateful that they chose to feature me … [so it could] bring more kids to the classes.”

“It was weird knowing that thousands of people were watching me,” she said. “I believe it did bring more people to the classes; I was able to get more people to know about the project, and it made me proud.”

“I told Elliana that this is a moment where she should feel incredibly proud of herself [because] she has taken her responsibilities and knowledge as a Dance Production member and spread that to the community through her Always Dancing Project,” said Leiana Volen, who also teaches dance classes at Sunny Hills. “She created something on her own and should be proud of stepping out of her comfort zone to give back.”

“I want to continue reaching out by contacting more places and hopefully having the classes in person soon,” she said. “I’m not sure if I would hand it off to someone or not [when I graduate], but for now I want to keep doing it.”

“I plan to do sociology and continuing [to] dance in clubs and taking classes on campus, but not on a team,” she said.