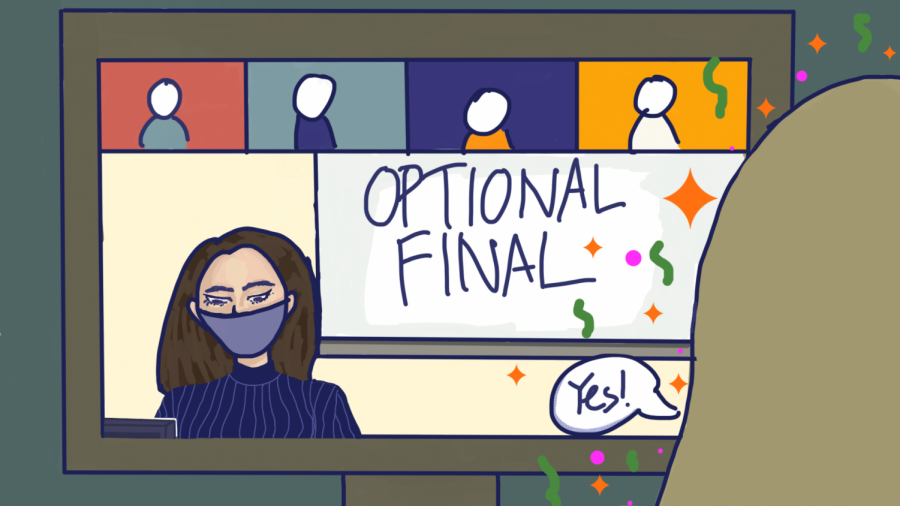 A student celebrates after a teacher announces that the semester final will be optional.

With final exams scheduled for next week, teachers have started to address what they plan to do during the two-hour period.

However, with this year’s COVID-19 circumstances leading to the distance and hybrid learning schedules during the fall semester, the Fullerton Joint Union High School District has modified the schedule for all of its high school campuses to follow. (In previous years, the district had left it up to each individual campus to determine what its finals week schedule looks like.)

So on Dec. 15, for example, students in zero, first and sixth periods will Zoom into their respective classes for two hours.

On the second day, Dec. 16, periods two and three would be next followed by four and five on Dec. 17.

Considerate teachers who have acknowledged the technical difficulties and the toll it takes on students have made finals optional, and more instructors should do the same.

“To lift some burden[s] off of students with finals coming up and to motivate students who are struggling but wanting to raise up their grades, I came up with an idea of having an optional final,” said Jina Shia, who teaches Honors Geometry. “It’s still mind-boggling for me to make my final exam optional, but it’s the best decision for a lot of my students who struggle a lot in prerequisite math classes.”

Along with Shia, the Honors Pre-Calculus teachers including Mariam Tan reached the decision of also making finals optional.

“[Given] the fact that this year is just so different from other years, I just feel that a cumulative exam in Honors Pre-calculus doesn’t have to be a requirement like it usually is,” Tan said.

While many in the math department have come up with this approach to next week, it’s clear that other departments should consider the conclusions of Shia and Tan.

Even though finals can gauge students’ comprehension of the course, the amount of stress and time it consumes outweighs such a necessity, especially during these confusing and unprecedented times in which students and teachers are uncertain about the future.

Although finals serve as a comprehension check for students and teachers, especially in Advanced Placement classes, the resulting stress, especially while adapting to online learning, is not worth making finals mandatory.

In this new method of education, mental health has the final word.