Athletes in Cohort C still ‘C’ to it that they stay in shape, contribute to their sports team 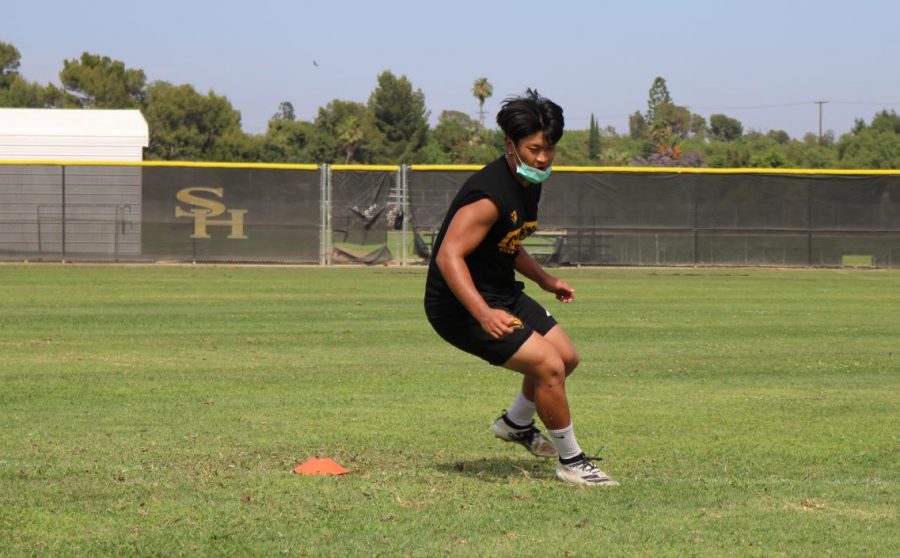 Linebacker senior Kevin Hu runs around a cone during a June 23 practice. The Lancer football team currently practices Monday-Thursday from 3:30-5:00.

After spending his first five class periods listening to his teachers’ lectures on Zoom and completing his work digitally from his room at home, freshman Aiden Ko rushes to campus for his sixth period class — football.

On a time crunch, Ko quickly jumps out of his mom’s car and runs to the weight room near the back of campus to join his fellow teammates on the freshman football team for practice.

“This tight schedule often messes with my plans and sometimes stresses me out,” he said.

Since the  hybrid schedule began on Nov. 2, athletes in Cohort C face a set of challenges that they are learning to overcome, including the problem of having to commute to school only for sixth period, which student-athletes like Ko face.

“I want to help my team as best and as much as I can, but it is going to be hard on my parents, as they have to constantly drop me off and pick me up on a packed work schedule,” said Ko, who chose to remain in distance learning until he and his parents agreed it was safe enough to return.

The mere eight-minute time frame students in sports like football and basketball have during the transition period to get from learning a home to practicing at school doesn’t make it any easier on them, especially if they live farther away from Sunny Hills.

“I don’t live super close to the area, so it makes it a little harder to be prompt, especially since the window to get from fifth period to practice can be tight,” basketball player freshman Gwen Briones said.

Although Briones has been attending on-campus basketball practices, she said it is difficult to socially distance in a typically social environment while simultaneously trying to build up team-oriented skills.

“I think it has taken a toll on my skill since we’re limited to what we have, and our practices aren’t at their full potential,” said Briones, who opted against coming to classes for hybrid instruction because she doesn’t feel ready to go back with the number of COVID-19 cases rising. “To limit the contact, we aren’t allowed to scrimmage and do drills where it contains a lot of passing.”

Junior varsity tennis player junior Jamie Suh said she has had less chances to play her sport and improve her skills because she has found it difficult to make time to practice amid all her other classes.

“Now that school has started, I’ve been so busy with work that I haven’t practiced for a few months now,” Suh said.

Nevertheless, she’s adapted to these challenges by practicing her swings by hitting against a wall outside of her house and running to remain fit.

“Something else I do, even though I barely have time to practice tennis, is go on walks or runs so I can be in shape and not fall behind when we eventually go back to school and there is a season,” said Suh, who feared coming to campus would make her more susceptible to the coronavirus.

Despite those in Cohort C attending school via Zoom full time, athletes choose to go outside or come onto the Sunny Hills campus to practice their sport because it’s for a shorter period of time than school, it includes fewer people and maintains social distancing rules, said volleyball libero sophomore Maile Fukudome, who plays on the frosh-soph team.

“I stay at home for school because I feel like there are more people who would be going to school, which would make it harder to stay six feet apart, while for sports there are not that many people and the time [spent on campus] is pretty short,” said Fukudome, who decided to continue with distance learning because she believed that it would be difficult for all students to comply with social distancing guidelines.

In contrast to Suh, soccer forward senior Gabriel Diaz has still found time to get practice; even though he is in Cohort C, he runs on his own, meets with his school teammates during on-campus practices and attends weekly practices with his club team, Liverpool Football Club International Academy Socal in Irvine.

Even so, it isn’t enough to compensate for the limited spectrum of skills the practice can cover.

“I know that I, along with a lot of other athletes, use sports as a way to relax and focus on something other than school, so just not being able to play sports messes with how you feel and adjust mentally,” said Diaz, whose parents wanted him to stay home because they felt it was safer. “It has taken a toll on my skills because being an attacking player means shooting on an actual goalie, but we haven’t had the chance to work on that because of COVID-19.”

Although he plans to remain in Cohort C, he says he is working harder than ever to hone his skills in the hopes of a season.

“At the moment I haven’t really thought about switching cohorts because I still don’t feel entirely safe as cases are still rising,” Diaz said. “However, if things start to get better, I’d definitely consider it.”