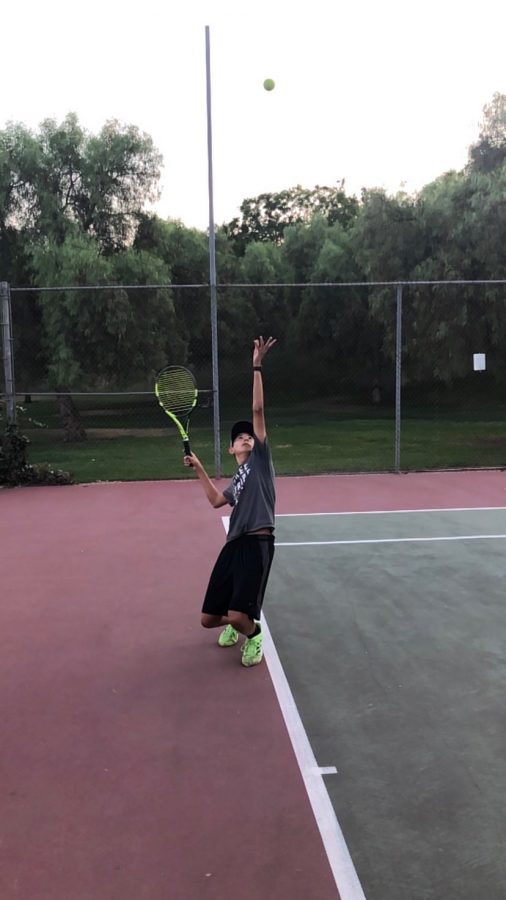 Sophomore Owen Taylor smashes a serve at the San Juan Courts during practice.

He’s played in front of his coach, his family and his friends — but never has a former No. 1 ranked tennis player.

Or at least that was the case until sophomore Owen Taylor took the court against Jagger Leach, son of three-time Grand Slam champion and Olympic gold Medalist Lindsay Davenport, at the 53rd annual Anaheim level 4 tournament and won (6-1,6-3).

“It was really cool to beat her son, but the match was more stressful than usual because I knew there was a former tennis champion watching,” said Taylor, who’s been rated as high as a three-star recruit on tennisrecruiting.net.

For the 2020-2021 school year, Leach, now an eighth grader, is a five-star recruit, according to tennisrecruiting.net. He’s also been ranked as high as No. 1 in Southern California’s recruiting Class of 2025.

Learning how to play tennis from his uncle, who is the head boys and girls tennis coach at Yorba Linda High School, Taylor grew up playing tennis in his cousin’s backyard and was enrolled in formal lessons by his parents at the La Habra Tennis Center at 6 years old. He would begin competing in tournaments two years later.

“My uncle was my inspiration for wanting to get more into the sport when I was little,” Taylor said. “

Before coming to Sunny Hills, Taylor played for the Orange County Competitive Trainer Center [CTC], a team composed of some of Orange County’s top youth tennis players. “It was a great way for me to grow as a player as well as a way for me to meet other players playing at my level,” Taylor said.

This opportunity would allow Taylor to grow as a player as well as meet other players on his level .

“After every game, I was extremely exhausted but proud of how my team and I played regardless of the outcome,” Taylor said. “SoCal is the most competitive area in terms of junior tennis, so to be the fourth best player in a team that came second in SoCal was pretty satisfying.”

Coming into his freshman year with the experience of playing at the CTC, Taylor dominated six of his games against Walnut, Whitney and Ruben Ayala.

After his time playing in tournaments and for the CTC, Taylor joined the SH tennis team, on which he was an integral part of the singles lineup as he was seeded no. 2. He debated on whether to go to Troy or SH, but ended up choosing the latter as he believed that it had a better tennis team.

“I really wanted to play and try to get a higher division individually and team-wise this year, but it did not happen [last season] because of the pandemic going on,” said Taylor, who won 16 out of 18 sets  out of the six schools he played. “I was also looking forward to going against Troy and Fullerton because I have friends on those teams as well.”

“Taylor excelled in his singles play in our preseason and is always [setting] the tone at practices with his admirable work ethic, and talent during tennis matches,” Ghareebo said. I plan on utilizing Taylor as the no. 2 seeded singles player this season because of his incredible win rate last season.”

Sophomore Mason Orton, one of Taylor’s closest teammates, commended Taylor on his attitude and his hustle on the team.

“He brings a whole new level of talent to the team because he knows how much the team counts on him to win his matches,” Orton said. “He utilizes the time to practice to really hone on skills he needs to and pushes himself to improve both himself and the team.”

Since the coronavirus hit, Taylor has been unable to play tournaments, but COVID-19 gave him the opportunity to focus on individual practice and develop his strokes.

Taylor hopes to jumpstart his second season this year as well as resume his tournaments when conditions improve.

“Although I’m disappointed that I missed my freshman season, it just means that I’ll be able to practice more for my next tournament and season which will hopefully be soon,” Taylor said

After high school, Taylor looks forward to continuing his tennis career, whether it be at the college or club level. He already has his eye on Lewis and Clark College, which he’s visited already.

“They have beautiful scenery and a great location as well as a good D3 team, which is a plus,” Taylor said. ”If I get recruited in college that would be amazing but if not, I would probably opt for a Division 3 school or to play club at a bigger college.”