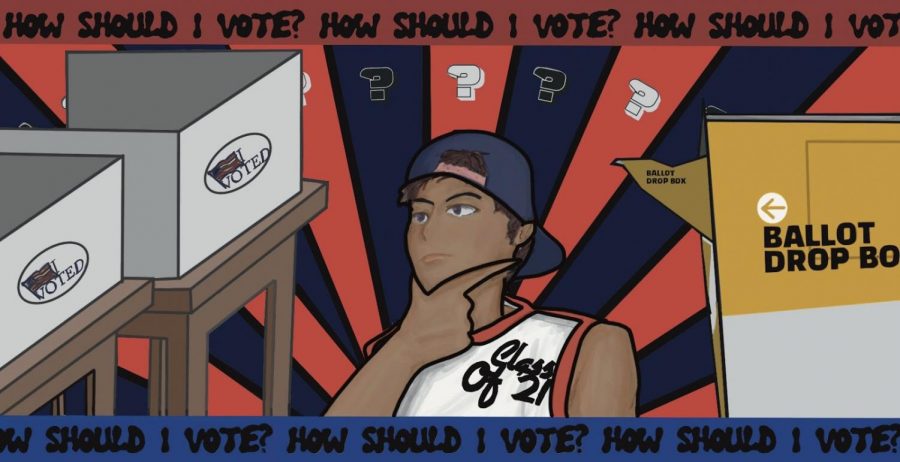 Seniors eligible to vote this year were given the option of voting in-person, by mail or by drop box.

With a black pen in hand, senior Andrew Miller sat at his dining room table signing documents, checking boxes and reading over propositions before leaving his ballot in the mailbox early last month.

“I felt all warm and fuzzy inside,” he said, after mailing in his ballot Oct. 7.

Miller was among a record number of voters nationwide — over 100 million — casting ballots on issues ranging from the choice of president to state propositions to local measures. In this year’s election, California began counting ballots 29 days prior to the election date — the same date ballots were to arrive at voters’ homes — causing Miller to turn in his forms early as a way to guarantee his vote was counted.

“The [voting] process was easy because it was straightforward and to the point,” said the senior, one of 49 enrolled at Sunny Hills who are of legal voting age though some can’t register because they are not U.S. citizens.

Miller said for the least biased information on propositions, measures and candidates, he relied on such websites as CA.gov and Ballotpedia.

After conducting his own research, he said he voted against Fullerton’s Measure U, which would prohibit the sale, possession and use of safe and sane fireworks.

The measure is unlikely to pass with 58% of voter ballots counted currently against the proposal, including Miller, who believes it’s ridiculous not to sell safe fireworks.

He also rejected the state’s Proposition 18, which would allow 17-year-olds who will be 18 at the time of the next general election to vote in both primary elections and special elections.

“I voted no because I think 17-year-olds would vote for people they just liked and disliked instead of for their actual policies,” Miller said.

The proposition failed with 55.1% against it to 44.9% of voters in support, amassing over 11.5 million votes according to the Associated Press.

Like Miller, senior Audrey Tanouye also experienced her first time filling out a ballot to vote by mail in the middle of October.

“I did it with my parents, and we discussed every office measure and proposition,” said Tanouye, who had the hardest time deciding how she should vote concerning Proposition 22, which would classify Uber and Lyft drivers as independent contractors. “I feel excited to have my vote counted.”

The proposition passed with a 58% majority vote

Tanouye said she also utilized the Official Voter Information Guide along with holding lengthy conversations with her family members before deciding who or what to vote for, including the presidential and local city council elections.

“I voted Aaruni Thakur for [Fullerton] City Council because she’s a Sunny Hills alumnae and wants to address homelessness in Fullerton,” she said.

Miller and Tanouye said they voted for Democratic presidential candidate Joe Biden, who was still in the lead with the most electoral votes as of Wednesday afternoon though the race has yet to be decided.

“I like Biden because he wants gun control, to reunite families, wider healthcare, to end qualified immunity and believes climate change is a serious issue, all of which Trump has not taken seriously while in office,” Miller said.

Tanouye took the current pandemic into consideration when deciding on her final votes.

“Biden is taking COVID-19 seriously and wants to heal the division,” said Tanouye. “We need to get rid of Trump since he’s not doing a good job.”

Senior Steven Cortez said he chose to drop off his ballot for his first time voting because of the coronavirus pandemic.

“I was keeping my distance from everyone and keeping my mask on,” said Cortez, who dropped off his ballot Oct. 21 at the A.R. Mart on Brookhurst Road in Fullerton.

Cortez said he preferred going online to search up the pros and cons of the propositions to help him fill out his ballot.

“I [also] voted against Proposition 18 because I feel like there’s a small difference between being 17 and being 18 that could impact one’s vote,” said Cortez, who declined to share his presidential vote.

Social science teacher Greg Del Crognale encouraged good citizenship to his students every semester by emphasizing how they must vote and showing them how to register.

“My experience and knowledge of American government has made me aware that voting matters, and elections have consequences, so if you’re eligible to vote, you should,”said Del Crognale, who declined to share his votes.

Some social science teachers were encouraged to see so many Lancers accepting their civic duty to make their votes count.

“My experience and knowledge of American government has made me aware that voting matters, and elections have consequences, so if you’re eligible to vote, you should,” said Greg Del Crognale, who teaches government and cast his ballot by drop box.