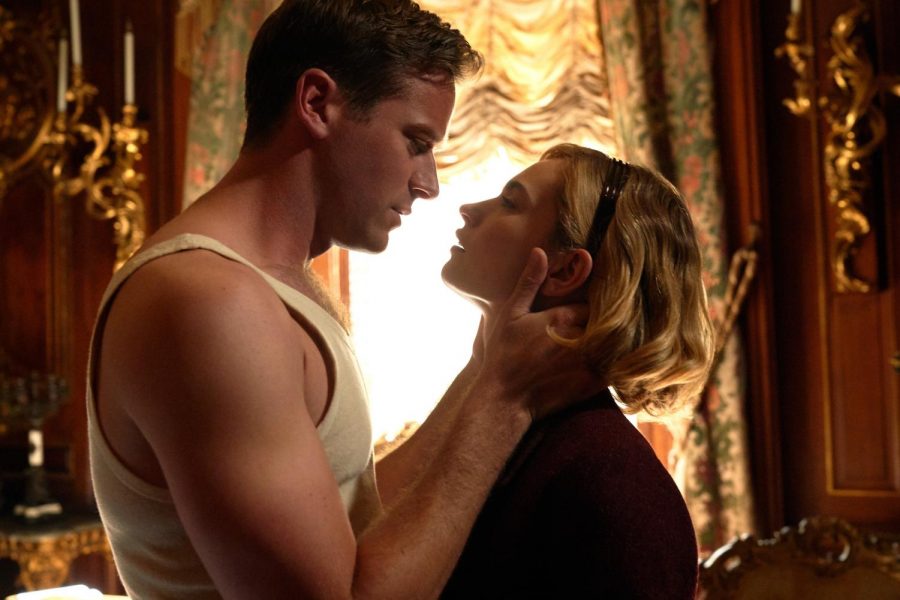 Image used with permission from Netflix

Netflix’s “Rebecca” will appeal to those who enjoyed reading gothic literature in their sophomore English classes.

Based on the 1938 bestselling novel by English author Daphne du Maurier, “Rebecca” introduces us to an unnamed young woman (Lily James, “Rare Beast”) who gets whisked away on a whirlwind romance with aristocratic widower, Maxim de Winter (Armie Hammer, “Wounds”). After only a couple of dates in Monte Carlo, Winter proposes that James’ character become his second wife and then brings her back after their wedding to his mansion in Cornwall to introduce her to the rest of his staff.

Just like in Jane Eyre when the female lead falls in love with Rochester, the woman begins to uncover obvious secrets about her husband’s first wife named Rebecca, whom we learn from head housekeeper Mrs. Danvers (Kristin Scott Thomas, “Military Wives”) how revered Rebecca was.

At this point, director Ben Wheately (“Happy New Year, Colin Burstead”) succeeds in mirroring the horrifying scenes that come along with most gothic stories. One such scene during a night in the castle shows the woman engulfed in ivy as a dream sequence, which lingers horrifying images in audiences’ minds even after the film ends.

Although the intricate scenes, historical costumes and convincing accents craft a compelling look of 1930s England, the beginning of this love story encapsulates the atmosphere of a contemporary teen romance flick rather than a period drama.

Besides accurately capturing the exterior world of the era, the visual details such as the period authentic clothes of the characters fail to accommodate for the lacking portrayal of the characters’ interior world, glossing over the themes of female empowerment and classist society, which was prevalent in the 1930s.

Another drawback to the more than two-hour film concerns the absence of the character’s internal perceptions and values for each conflict causing the protagonists to look unnatural and adrift from its historical setting which overall results in an unconvincing story.

For example, the film establishes the narrative of a lower class woman in the 1930s but does not further develop or build up this theme as the film progresses.

Although disregarding such themes renders a family friendly atmosphere suitable for even young audiences to watch, it ultimately leaves the film feeling bland and insubstantial.

Despite the problems as a period piece, Wheately’s “Rebecca” — a remake of the 1940 Alfred Hitchcock film that snatched an Oscar for Best Picture at the 13th Academy Awards —  stays true to the gothic genre with its conventional motifs such as a large ancient house and a forbidden but alluring bedroom. Moreover, other elements such as the thundering weather serve to foreshadow that the couple’s initial romance are only the calm before the storm.

In more correspondence with the gothic fiction style, the character archetype remains true to the novel with a suave, solitary male protagonist burdened with a guilty secret and a frightened but virtuous female protagonist in distress from a source of terror.

As the story progresses, the mysterious death of Rebecca swallows the second Mrs. de Winter into a rabbit hole of turmoil, pushing the young woman to further find out the secrets behind the dead wife, her husband and the menacing Mrs. Danvers.

The director faithfully follows the conventional genre with a generally melodramatic narrative, but the engaging plot collapses entering the second act as the movie clumsily leaves trails of hints throughout the story for the female hero and the audience to pursue.

Rather than an engaging hunt to solve the secrets with audiences on the edge of their seats, the tension of the film fails to grasp viewers’ attention which prompts them to instead look away to a second screen.

For a mystery genre to flourish, the storyline has to intrigue audiences to the point that countless questions stir up constantly in their heads and they themselves shape their own ideas and opinions about the prime suspects and the possible motives.

None of these hypothetical scenarios of audiences’ reactions while viewing the movie take place because of its oddly transparent and obvious ending.

For instance, the story builds up Maxim as an unfaithful, enigmatic husband and Mrs. Danvers as a loyal, trustworthy housekeeper, when it is clear in viewer’s eyes that Maxim truly cares for the protagonist and that Mrs. Danvers embodies the aura of a villain.

Therefore, by the end of the second act, audiences have already crafted a large and accurate sum of the puzzle which hampers the suspense and thrill of the climactic scenes in the third act, leaving audiences uninterested and unengaged.

In the long run, this version of “Rebecca” will not win any major Hollywood trophies, but for those looking for time to kill during a COVID-19 Halloween, this could fit the bill.