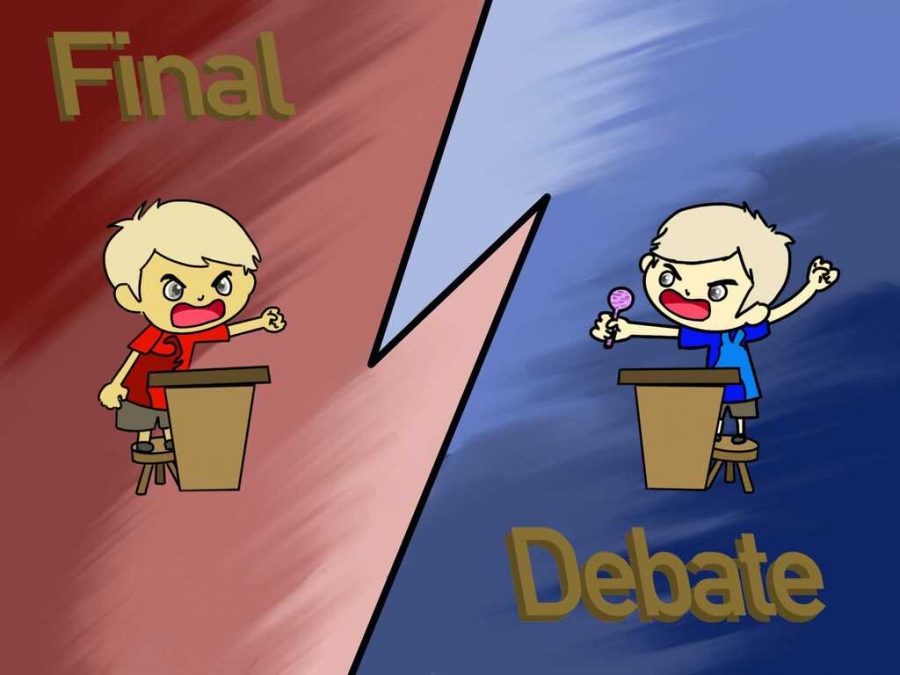 An artist's interpretation of what the final debate could look like.

A representative of the people deserves to be chosen by the people.

And to do this, eligible voters should know as much about their potential future leaders as possible including their policies, mannerisms and morality.

Hence, the presidential debates were formed for this election cycle: three Lincoln-Douglas style debates (two between the presidential and one between the vice-presidential candidates) and a town hall, which unfortunately got canceled because of President Donald Trump’s refusal to hold the event via a virtual format rather than a live one.

For the final presidential debate set for tonight in Nashville, the Commission on Presidential Debates made two last-minute changes to the original agreed-upon format: muting the candidates’ mics at certain points and changing the debate topics.

The former is a much-needed precaution after the constant interruptions during the first presidential debate, while the latter is a simple math problem — six topics of debate outnumbers just one.

According to a Sept. 30 article on Slate’s news blog, Trump spoke over the moderator and Democratic presidential candidate Joe Biden roughly 128 times total during the Sept. 29 presidential debate. In addition, the moderator even asked the president around 25 times to follow the debate guidelines, which included two minutes of uninterrupted response time for each candidate.

The mic-muting is necessary to enforce the set rules both candidates’ parties had already agreed to, aiding the moderator in keeping the speaking time for the debaters at an equal level. It’s also important to note that the candidates will be unmuted for the remainder of the 15-minute time so the commission’s decision wasn’t an all or nothing deal like what happened with the second debate that got canceled.

“We are comfortable these actions strike the right balance, and that they are in the best interest of the American people,” according to a statement from the Commission on Presidential Debates.

Originally, the two candidates were supposed to address their views on foreign affairs tonight, but on Oct. 16, the debate commission announced to both sides that the event would instead focus on six issues: fighting COVID-19, American families, race in America, climate change, national security and leadership.

Though that has angered Trump and his fellow Republican supporters, it’s important for them to understand that since the town hall second debate got canceled, many of these topics need to be addressed.

The fight against COVID-19 is an impossible topic to ignore. Considering how the next president will lead the country against this struggle, either saving or causing the loss of countless lives based on his decisions, it’s a crucial issue for voters, especially the undecided ones out there.

Similarly, the two must discuss race in America. As the number of Black Lives Matter and peace protests against police brutality magnified during the summer and remain an issue whenever a Black person is shot at or killed by someone in law enforcement, voters need to hear what specific plans both candidates have if civil unrest were to continue if the outcome of the election doesn’t favor certain groups. Americans need to hear, for example, whether defunding the police is the ultimate solution to end police brutality.

The variety of topics covered, in combination with the first presidential debate issues, will give the American public insight into Trump and Biden’s views beyond their websites and TV sound bites.

Although foreign policy remains a critical subject for discussion, especially considering recent developments involving Republican accusations about Biden’s son and Democratic claims about a “secret” money fund in Trump’s name in China, this topic will not make or break the financial backs of American voters.

Americans already have a fairly consistent view on how the United States should deal with countries threatening the free market economy or human rights values. Seven in every 10 Americans believe diplomacy is the best method to ensure peace vs. only 26% in favor of military strength. Knowing their candidates’ policies toward one topic cannot compare to knowing their views on six for American voters.

The commission should be commended, not verbally attacked, for the updates they’ve made to tonight’s debate. Besides the ability for the moderator to mute either speaker’s microphone, those crying foul should be the ones to get muted, too.