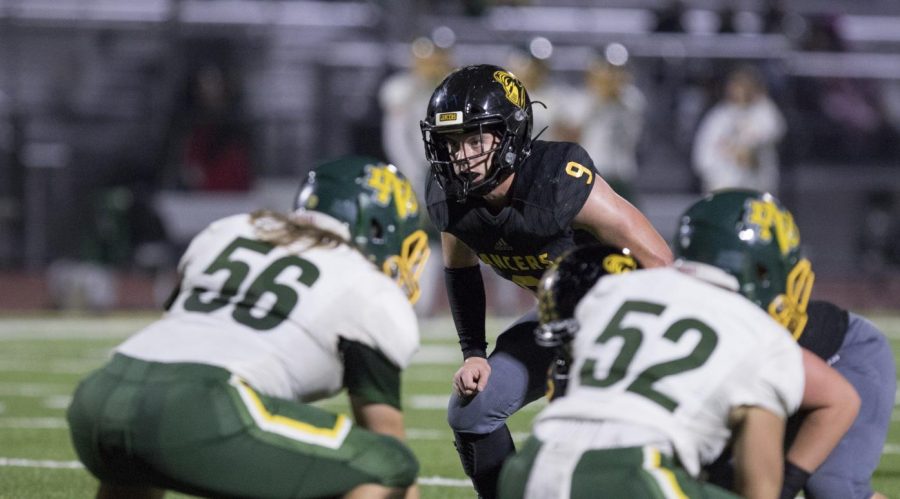 Wearing his No. 9 Lancer football jersey, linebacker and then-junior Carson Irons gets ready for the next offensive series during a Nov. 15, 2019, game against Notre Dame of Riverside in a California Interscholastic Federation-Southern Section Division 8 quarterfinals matchup. After racking up 186 tackles, two sacks and an interception last season, Irons has committed to play Division 1 football for Princeton University in New Jersey.

On second and goal, the Trabuco Hills quarterback tossed a pass toward one of his receivers on the one-yard line, but Sunny Hills defensive back and then-junior Brandon Roberts deflected the ball away.

That was the first thing that crossed Irons’ mind as he watched the football hover in the air just away from the endzone.

Irons extended his arms and launched his body in the direction of the ball, and in his hands landed the pigskin, protecting Sunny Hills’ 31-27 lead and sending the Lancers to their first CIF-SS final since 1992.

“At the time, I was shocked and barely processed that that play secured us the game,” Irons said. “I definitely will not ever forget that moment.”

Irons’ interception off Roberts’ deflection sealed a trip to the championship round for the Lancers, who eventually defeated Santa Barbara, giving the team its fourth CIF-SS title in school history.

“I will definitely remember our championship run the most,” Irons said. “It was such a special experience to win a ring with my brothers in the rain.”

“I was very honored to receive those titles and to improve each year,” he said. “I stay consistent in my workouts and find key areas I can improve on after each season, such as sharpening my defense”

While Irons’ teammates who were seniors at the time graduated as champions, the third-year varsity starter believes he and his returning cast of players have unfinished business this season when it starts in January.

And he’s not going to let his commitment to play football at Princeton University next year get in the way of his goals to wrench the Freeway League title from perennial winner La Habra — which has won 12 of the last 13 Freeway League titles — and to capture a second CIF-SS title in as many years.

“We are going to have that same mindset of working hard as a team and playing our very best out on the field,” Irons said.

“Carson is a great student and a great football player, [and] everyone knows that,” Karavedas said. “He has every reason in the world to be arrogant, and yet he remains humble.”

“He is one of the hardest workers I know not only on the field, but also in his studies,” Brown said. “He is constantly working to perfect his craft, and he deserves everything that is coming to him.”

Since his freshman year, Irons has enrolled in several honors and Advanced Placement [AP]-level courses, including four AP classes during his senior year despite having already landed several offers to play football at Ivy League schools.

Irons acknowledges that he’s had to learn to balance his school work with his football schedule.

“During the season, I will usually go to school to lift from 2-3 p.m., practice from 3-5:30 p.m. [and] then go home to do my homework for two hours and study the week’s film for two hours each night,” said Irons, who’s also in the running for one of the Class of 2021 valedictorian spots. “During offseason, it’s much lighter, as we usually only have lifting from 2-3 p.m. and some sort of conditioning or speed training after for one hour.”

The senior got his first experience on the gridiron in eighth grade, playing in Pop Warner leagues as a two-way athlete before suiting up as a defensive end for the Fullerton Titans youth football program.

Upon deciding which high school to attend and specifically, which football program to join, Irons said being a legacy student and watching the culture that Karavedas built were the main draws for coming here.

“The brotherhood you build with your teammates and the opportunity to push yourself physically and mentally is why I love football so much,” the senior said. “I chose Sunny Hills because it is where my dad went to high school (Class of 1984), and I wanted to be part of the culture that coach Karavedas created in the program.”

And that’s also how the linebacker ended up accepting Princeton’s offer to play linebacker for that New Jersey school.

“It was truly mesmerizing that I have a chance to not only play at the next level, but to do so at such an esteemed university,” said Irons, who turned down offers from Brown University, Cornell University and Northern Arizona University. “My relationship with the coaching staff is what sold it for me because I felt like they have a special culture over there, very similar to what we have under Karavedas; not only do we have a chance to develop as athletes in a phenomenal program, but also as people.”

Though this is his last year at Sunny Hills, this is not the last “Irons” who’ll grace the halls of the campus and who could likely make another big impact on the Lancer football field. His younger brother, Connor, is a freshman and a Lancer this school year.

Though he doesn’t want to put any pressure on his sibling to follow the Irons legacy, the older Irons is quite confident that the freshman will make his own mark on campus.

“I would hope that I am setting a good example for my younger brother, but regardless I know he will do big things,” he said. “He’s going to be a great leader for the [football] program these next four years, and his great work ethic will definitely show on the field and in the classroom.”

Though Carson Irons will enter Princeton next fall as an undeclared major — he’s considering business/finance or engineering — he will also keep his options open for a future career in the NFL.

“I will by no means turn down an opportunity to play pro football if it presents itself, but I am going to take it one step at a time and focus on college ball and my education,” he said.

That’s the same type of advice he’d like to leave behind not only for his junior and underclassman teammates, but also for all Lancers.

“Use your time efficiently and don’t procrastinate,” Carson Irons said.” “It seems obvious, but if you can get in the habit of staying focused and always looking for intervals to get something done, things become a lot easier.”