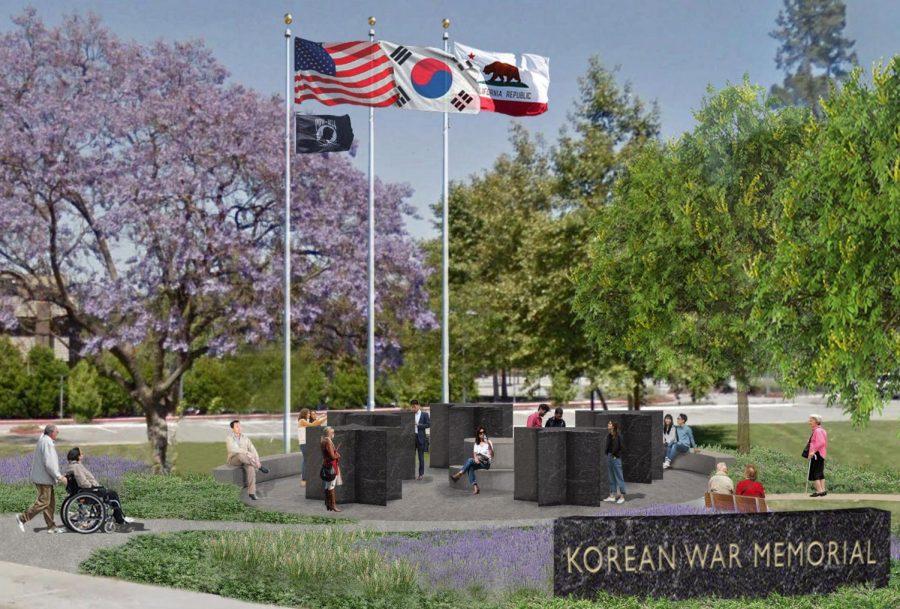 An artist’s rendering of what the Korean War Memorial would look like once enough funds have been raised to have it built at Hillcrest Park next to the duck pond in Fullerton, near Fullerton Union High School.

A committee working to build a Korean War Memorial in a Fullerton park has created a GoFundme page to raise the remaining $130,000 of $720,000 needed to begin construction of the monument to honor the nearly 35,000 U.S. soldiers who fought and died in that 1950-1953 conflict.

“I am really hopeful that by June 25 of 2021 — the 71st anniversary or commemoration of the start of the Korean War — we will have this monument completed and have an unveiling ceremony with all the dignitaries, as many as possible from the Korean government and the United States government,” said Joe Pak, secretary general of the Orange County Korean War Memorial Monument Committee.

Pak came up with the idea more than a decade ago to recognize the 34,757 U.S. military soldiers who according to the National Archives fought and died in the Korean War; the statistic is also based on soldiers from Washington, D.C., American Samoa, the Canal Zone, Guam, Puerto Rico and the Virgin Islands.

Also known as the Korean Conflict, the war didn’t end with any clear winner; its aftermath left Korea still divided as two nations — North and South Korea — and continued the Cold War between the United States, which fought on the side of the South Koreans, and the Soviet Union (now Russia), which supported the North Korean communist regime.

The main problem Pak said he’s had with promoting the fundraising campaign has been others’ assumptions that the memorial would recognize Koreans because of its name, the Korean War Memorial.

But upon reaching an agreement in the summer with Fullerton city officials, Pak and others involved with the project were able to hold a groundbreaking ceremony Aug. 14 at the site of the memorial at Fullerton’s Hillcrest Park near the duck pond, which has also been closed for modernization. The park on North Harbor Boulevard is nearest to Fullerton Union High School.

Another big hurdle to bring the monument closer to fruition was the $210,000 that the Ministry of Patriots and Veterans Affairs of the Republic of Korea has agreed to donating, Pak said.

The monument consists of five stars, each five-feet tall and made of granite standing up as pillars and surrounding three poles — one featuring the American flag, the other the South Korean one and the last the California flag.

Once built, the soldiers’ names will be etched by state into a three-foot-wide-by-five-foot-tall panel placed into each of the stars’ sides.

“We shouldn’t forget [the soldiers], their sons, daughters and their family members who lost their loved ones for us — Koreans and Americans,” he said.

The memorial would also be the only one of its kind nationwide recognizing those who fought in the Korean War, Pak said, adding that not even the monument in Washington, D.C. — where the famous Vietnam War Memorial resides — contains names of the U.S. soldiers who fought and died for their country.

Sunny Hills Korean teacher Esther Lee agrees with Pak about the historical significance of this project.

“I strongly believe it will be helpful to Korean-American students who need to know more about the history of Korea,” said Lee, who teaches Korean 1 and 2 and advises the Korean Culture Club.

Senior Ella Eseigbe is looking forward to the project’s completion as well, adding, “It seems like it’ll be a nice addition to the neighborhood.”