13 try out for boys soccer, but recent poor air quality has prevented coach from scheduling more sessions for newcomers 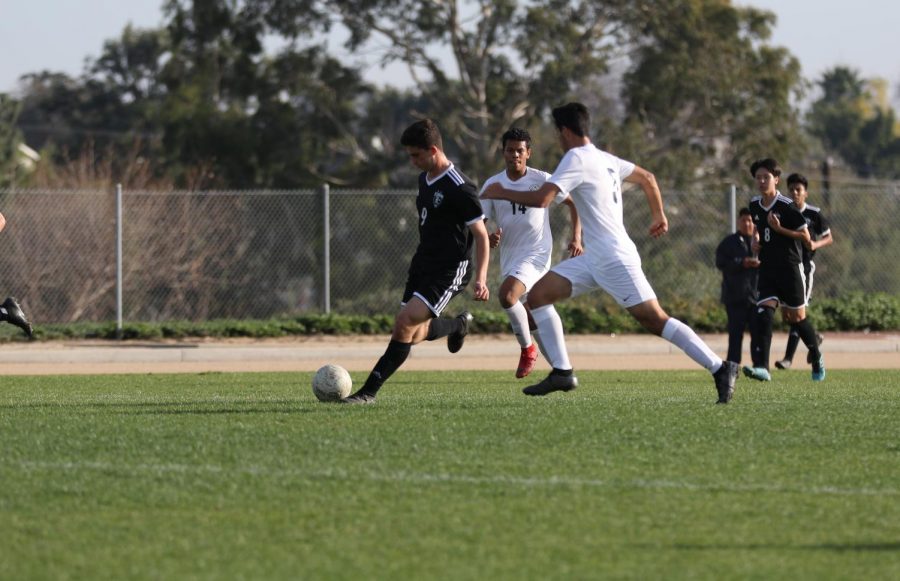 Forward and then-freshman David Rezko (left) kicks the ball during a 2-1 home victory over Buena Park on Jan. 24. The sophomore, along with his new teammates, will vie for a second Freeway League title in as many years when their season begins next February. Meanwhile, on Sept. 3, head coach Mike Schade held tryouts drawing 13 candidates.

This is the second of a series of reports the Sports section will cover regarding team tryouts in the 2020-2021 school year.

Before the coronavirus pandemic affected high school sports nationwide, boys soccer head coach Mike Schade would’ve been able to figure out what his team roster would look like heading into the winter season.

Schade said he would hold tryouts during his summer soccer camp, but the Fullerton Joint Union High School District [FJUHSD] closed all sports on July 6, the day before the initial start of his camp.

And since the 2020-2021 school year has pushed back the soccer season to Feb. 27, he said he decided to open his second day back with team practices as a tryout, especially for incoming freshmen.

“The tryouts were held to try and identify interested student athletes, so it not only did that, but it also served to get players cleared so that they can participate in sports,” the coach said of the Sept. 3 session. “We were able to evaluate those that participated with some movements related to the game of soccer.”

Before Sept. 3, Schade said he had sent a list of guidelines via email to each newcomer describing the responsibilities of each coach at the various levels of competition, parents and the player to ensure a safe practice before the tryout date.

Some requirements listed in the protocol included a medical clearance and a signed waiver for participants, he said.

A total of 13 newcomers came out with 11 of them being freshmen, the coach said.

As for in-person drills, cones were set on the ground to space the players away from each other to maintain social distancing guidelines, Schade said.

“We could only evaluate them on athleticism, since no soccer balls were allowed at practice,” he said. “From our evaluations, they are a great group; however, evaluating them with the ball and in interscholastic competition is what really demonstrates to the coaches how much these student-athletes can help the Lancers.”

The newcomers not only showcased their skills in footwork, ability to accelerate and decelerate and turn while running, but they also demonstrated their understanding of the game of soccer when Schade had them walk through game situations and asked them questions to check their knowledge of positioning.

Freshman Aidan Fichtelberg found out about the tryout from his brother, Donovan, a senior on the varsity squad, and his parents.

“The experience of the tryout with the COVID restrictions was not what I had expected — I was ready to see boys passing a ball around; however, we weren’t allowed to so all we did was run, which is not most players’ favorite,” Fichtelberg said. “[But] I was also able to see the coaches and players who I would [possibly] be surrounding myself with for the next few years. I was just happy to be there with the program.”

No new tryout date has been added because practices have been canceled for all sports. The FJUHSD made this decision on Sept. 8 because of poor air quality from the fires ravaging much of the state, including nearby Los Angeles and Riverside counties.

Because they cannot practice outdoors, Schade has assignments related to soccer that the team must complete. Players keep a journal of things they do throughout the week, watch EdPuzzle videos and complete the questions designed specifically for Lancer soccer and do indoor workouts.

“I look forward to seeing the players compete in practice and having the opportunity for team building,” Schade said about resuming practices on campus again.