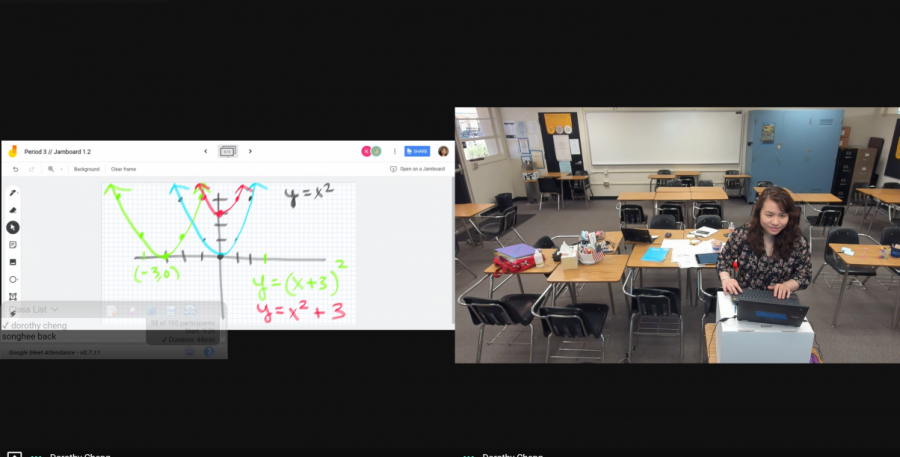 This is the first of a series of upcoming, weekly feature profiles of new, full-time teachers and administrators at Sunny Hills High School for 2020-2021.

Cheng, one of two new math instructors at Sunny Hills this school year, recalled the experience she had in her seventh-grade math class at Alvarado Intermediate School in Rowland Heights.

“I remember learning by doing a lot of examples,” Cheng said. “[My teacher] would give us an example to do, and if we got it correct, she would give each of us a raffle ticket, and she would hold raffles periodically [to reward us].”

But her path toward reaching that career goal took a detour during the four years she attended Rowland High School in Rowland Heights as the pressures of bulking up her college resume became a bigger priority.

“But I felt very empty,” she said. “I did a lot of those activities to make other people proud or to make myself look good in other people’s eyes.”

Ironically, instead of pursuing any math-related activities, Cheng said she decided to join her high school’s newspaper as a staff writer during her freshman year.

“I’m not athletic or anything, but I always had that interest in writing and publishing papers,” she said. “The activity I was most passionate about was the school newspaper.”

Cheng said she eventually became a layout designer in her junior year and by the following year, she was appointed the editor-in-chief of The Branding Iron. Looking back, that experience has helped shape her educational philosophy today.

“I remember as a high school senior that I was confused and disappointed that staff members did not seem to care as much as I did and that readers did not seem to value the newspaper as much as I did,” she said. “This relates to my job as a teacher in which I try to do my part each day and don’t always know the outcome of my efforts. Thankfully, the students at Sunny Hills care a lot about academics, and it feels nice to be on the same page as my students in regards to fully understanding math concepts and putting in the work each day.”

Though she developed a passion for writing, she still enjoyed math nonetheless but never really engaged in the subject outside of class.

“I like more of the foundational math courses and concepts and helping students become more comfortable with introductory topics,” Cheng said. “If there was a math club for peer tutoring, I would have joined that, but we didn’t have that in my high school.”

She eventually rekindled her interest in this subject after she graduated from Rowland and during the latter years of her college experience at the University of California, Irvine [UCI], where she eventually switched from an undeclared to an economics major by her sophomore year.

“At my high school graduation, after feeling empty with all my accomplishments, I decided to just focus on academics during college and do what I really wanted to do, not what I thought other people wanted me to do,” Cheng said. “Economics is just very logical and objective, and it affects everyone.

“There are a lot of real-life applications to it and a lot of math involved, so I guess I loved the logical reasoning behind it.”

She grew to love her major and continued to pursue her interests in math as well as writing. Economics allowed her to write research papers and explore applications of math in a professional career.

“I was at UCI for five years,” Cheng said. “I completed my BA [bachelor of arts] in four years and in my fifth year, I obtained a master’s in social science while I applied to Ph.D. programs.”

Upon graduation from UCI in 2010, she decided to pursue another interest of hers — challenging her comfort zone by attending an out-of-state grad school at the University of Wisconsin, Madison, where she spent six years in pursuit of a doctoral degree in education.

She said she sought a Ph.D. in education because of her passion to improve students’ educational experiences and to study various outcomes of success within groups of students. In obtaining her doctoral degree, Cheng has researched how factors such as race and income all result in disparities within student growth and performance.

Her experiences in graduate school provided her with a different lens on student life and how unpredictable aspects of students’ living situations can affect their schooling. Issues such as poverty and class play a part in students’ achievements and can either inhibit or further their educational growth.

In preparation for her thesis on differences in scholastic outcomes, Cheng said the research she conducted made her realize that social issues have an impact on one’s education, not just academics.

“I think if I went straight into teaching right after college I would have missed a broader perspective of students’ lives,” she said. “They’re not just a test score or a grade in my class, but they’re people with families and communities connected to them.”

While writing her dissertation, she taught remedial algebra courses at her university to college freshmen who required additional help before taking regular classes.

“I loved making math easier for students and seeing them develop that confidence in math and in themselves,” Cheng said.

Besides her studies at an unfamiliar location, assimilating to the Midwest climate and culture became another challenge, though over time she came to embrace it to the point that she developed her religious beliefs from life in Wisconsin.

“My first year was really hard, adjusting to the weather and figuring out how many layers [of clothing] to wear every season,” Cheng said. “I was never away from home for that long, even as an adult, and being apart for six months at a time was new for me.”

Additionally, Cheng converted to Catholicism, which has become a major part of her life now.

“Growing up, I had always wanted to become Catholic as I saw my relatives practice the faith, but I did not know when or where that would happen,” she said. “UW Madison has a very authentic and traditional Catholic Newman Center, and I received my sacraments of initiation there.”

Her experiences there allowed her to explore a new way of life and gave her some insight into what her professional career would look like in the future.

“I loved my time in Wisconsin because during that time I received my life-changing faith and also taught math to a classroom of students for the very first time,” Cheng said.

After finishing her doctoral program at Wisconsin, Cheng decided to pursue a career in education, and that led her to the teaching credential program at California State University, Fullerton.

After her first year in the teaching program and a semester of student-teaching at Ladera Vista Junior High School in the Fullerton School District, she received her teaching credential in 2018. By the following year, she got hired to teach seventh-grade math at Magnolia Junior High School in the Chino Valley Unified School District, just over the hill on Highway 60 from her hometown of Rowland Heights.

While teaching there, Cheng learned of a need for a math instructor in the Fullerton Joint Union High School District [FJUHSD], and she decided to submit her application. On the day of her in-person interview in front of FJUHSD principals and math department leaders, Sunny Hills math department chairwoman Mariam Tan recalled how much of an impression Cheng made upon everyone there.

In late July, the FJUHSD’s Human Resources department contacted Cheng and offered her the position to teach four Algebra 2 classes and one Geometry course at Sunny Hills.

“My colleagues at Chino knew more about Sunny Hills than I did, so when I told them I was going to Sunny Hills, they were just as excited as I was,” Cheng said. “I’m super grateful that the school chose me, and I’m just happy to be here.”

Within her first week of teaching, Cheng set up goals for her students and the future of her classes. She made sure that her desired accomplishments aligned with her teaching philosophy.

“I want my students to develop confidence in math and have a more positive orientation toward math in general,” she said. “I think by being a great math student, it actually helps all your subjects, and it develops grit and not [being] afraid of making mistakes.”

One of her third period Algebra 2 students, junior Isaiah Esguerra, had nothing but compliments for the new teacher.

“I like that she is straightforward and patient, and I think she has potential to be a really good teacher here,” Esguerra said.

He also has noticed that Cheng strives to maintain her students’ knowledge of math and provide them with the necessary skills to pass her class.

“She’s very persistent in making sure we understand,” Esguerra said. “She recaps over the examples and explains them in a different way, and she can approach stuff at different angles.”

Though Tan has not personally observed Cheng’s techniques as an instructor because students are receiving distance learning instruction, the math department chairwoman praises the new teacher for Cheng’s proactive approach to sharing information with Tan.

“While my role as a department leader is not in any way supervisory, Dr. Cheng has shared some of her distance learning classroom videos with me, and I was impressed; of course, she is organized, gives various explanations for one concept, uses technology efficiently and with ease, calls on students yet gives them some time to think,” Tan said. “… For her to reach out to me and share her class videos, it just shows me that she really cares about continuously improving.”

In a way, Cheng’s high school experience in journalism ultimately also played a role in her getting offered a teaching position here.

“It actually reminds me of what I picked up on during [Cheng’s] interview; she was one of the few candidates who was writing things down,” Tan said. “The interview questions, her thoughts, … very few people take the time to really make sure that they are answering the questions being asked, but she is one of them.”

Outside the classroom, Cheng said she spends her free time shopping and teaching Sunday school to first- and third-graders. She also enjoys eating Vietnamese noodle soup and macaroni and cheese and working out at the gym.

“During the weekends and summers, I love to go to the gym and spend time on the treadmill and elliptical,” she said. “Once the shutdown is over, the gym is the first place I’m going.”

Above all else, Cheng said she aims to keep her students engaged because they need to retain fundamental math skills for their next class. But at the same time, she understands the pressures and challenges of entering a new school year.

“I hope my students are coping well, and I try to be as flexible as possible, but I also have high expectations regarding distance learning, especially for math ,” she said. “I really think about the needs of my students, and I still want them to learn, so I’m constantly giving feedback to them so that they make corrections on their work and fully understand the concepts.”