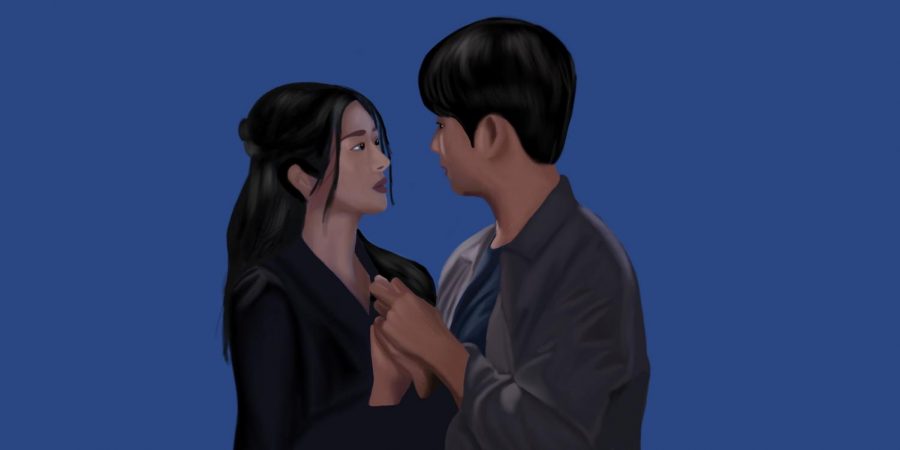 An artist's rendering of a scene from Netflix's Korean-imported TV series, "It's Okay to Not Be Okay." Actress Seo Ye-ji (left) plays Ko Moon-yeong, a children's book author who stares into the eyes of Moon Gang-tae, played by Kim Soo-hyun, because of a situation over a smartphone.

It’s a classic story revolving around a pair of star-crossed lovers — only with a hint of mild horror yet still quite satisfying to watch.

The debut season of the Korean TV drama, “It’s Okay to Not Be Okay,” originally aired from June 20-Aug. 9 in South Korea but has been available for streaming on Netflix as well with English subtitles.

Over the span of 16, one-hour-long episodes, the story follows three traumatized individuals as they try to overcome their life-altering experiences: the misunderstood but hardworking child, Moon Gang-tae (Kim Soo-hyun, “The Producers”), his autistic brother, Moon Sang-tae (Oh Jung-se, “The Good Detective”) and a children’s book author, Ko Moon-yeong (Seo Ye-ji, “Lawless Lawyer”). After their mother’s death, the two orphan brothers, who have been moving every spring, settle down eventually at a psychiatric facility where Gang-tae works as a caregiver. This is the way Sang-tae is able to escape the nightmares he has of their mother’s death.

A major scene in the drama is when Sang-tae goes crazy after a man touches him on the head, but Gang-tae remains calm and soothes his autistic brother. He covers him with a jacket in front of the huge crowd, telling him, “I’m sorry, it’s OK,” (a partial allusion to the show’s title).

This scene is extremely moving with deserved praise going to the actors’ ability to portray raw emotion and their struggles accompanying mental illnesses. Unlike other dramas that only focus on love and romance, this series brings out the deepest of emotions, touching the viewers’ heart.

Although the series starts off with murder and heartbreak, it gradually takes a lighthearted turn and focuses on romance and personal healing. The story is psychological, and several scenes are extremely intense. The drama is filled with tears and blood, taking the audience on a roller coaster of sentiments This plot distinguishes it from most Korean dramas that typically focus on love triangles and trivial disagreements.

Combined with phenomenal acting and cinematography, this unique storyline creates an outstanding show that differentiates itself from numerous other Korean Netflix series such as “Crash Landing on You” or “Itaewon Class.”

Overall, “It’s Okay to Not Be Okay” shows how affection can mend traumatizing pain and help overcome any hardships, all the while  portraying the importance of family. This inspiring and relaxing drama is a must watch for people all around the world as it displays a variety of emotions — pain, love and everything in between.

By the last episode of this season, viewers will be OK to get started on the second one whenever it’s released.