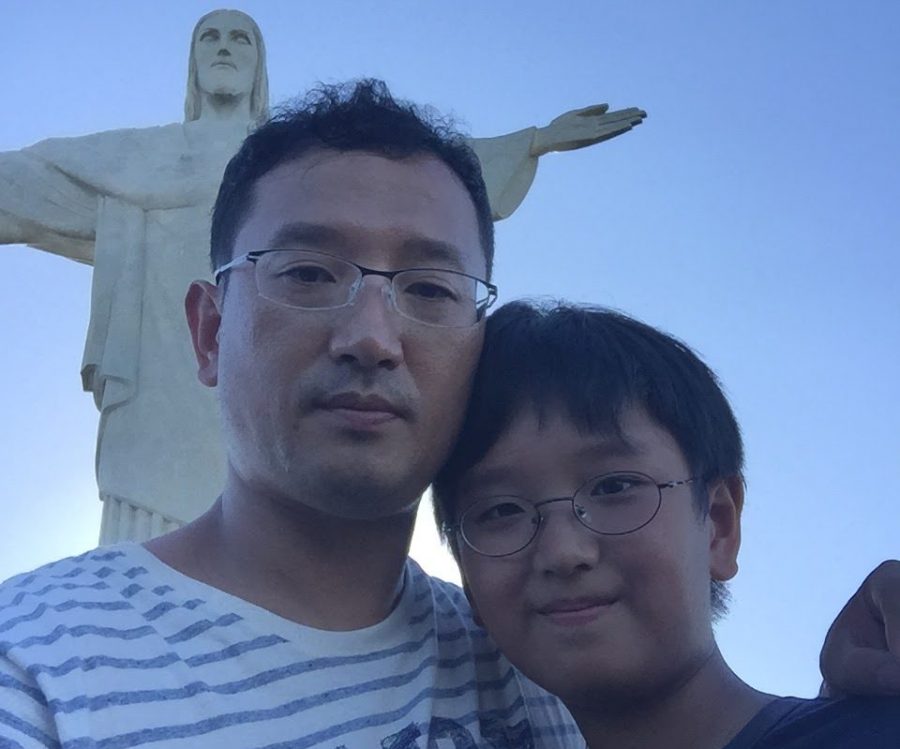 Junior Edward Cho (right), who will attend Sunny Hills virtually this year from his home in São Paulo, Brazil, stands with his father in 2015 in Rio de Janeiro, Brazil.

According to Google maps, it’s 6,130 miles from Fullerton to Sao Paulo, Brazil.

And while most of his peers are still munching on their morning breakfast, junior Edward Cho is looking forward to devouring his meal for lunch.

That’s because Cho has been staying in his South American home during the coronavirus pandemic while remotely joining his Zoom classes at Sunny Hills since the Fullerton Joint Union High School District [FJUHSD] closed schools to all in-person classes and turned to distance learning in mid-March.

“My parents wanted me to visit during the summer, but because of SAT studying, I probably wouldn’t [have been] able to see them for at least two years,” Cho said. “But with this corona[virus] thing and everything online, my parents made the at-the-moment decision, ‘School’s online, so I think they can [attend school] here.’ ”

Cho said his parents booked a flight from Southern California to Brazil for him and his brother, an SH sophomore, to leave their aunt’s house in Fullerton and come back home on March 14, the day after FJUHSD sent the email announcing the shift to virtual instruction.

His parents thought moving back to his homeland temporarily would be a safer option since Brazil didn’t have many COVID-19 cases at the time, he said. As of March 13, Brazil averaged 12 cases per week, according to The New York Times’ Brazil coronavirus map.

“When I heard my parents talking about the possibility [of coming back], I was really glad,” Cho said. “This opportunity is something I wouldn’t have without the coronavirus, but because of it, I get to see my parents and my family.”

Although he’s lived in Brazil for most of his life, Cho was born in Southern California and plans to attend an American high school and university. As an SH student this year, he’s the middle blocker on the boys volleyball team — when it takes to the court again in December.

“It’s still on my [class] schedule, but I’m not sure what’s going to happen,” he said before school started regarding his volleyball commitment. “We might do online training.”

But when school began, the boys volleyball team needed a new coach, so Cho said he and his teammates weren’t able to conduct practices.

His IBSL Mathematics teacher and Link Crew co-adviser, Cristian Bueno, had Cho as a student last year and this past summer for Honors Algebra 2 and Pre-calculus, respectively.

Bueno — who has had two students attend her class virtually at 2-3 a.m. in Korea last school year — said in light of his situation, Cho’s work ethic will help him succeed this year.

“He might benefit from being in a different time zone since school is later in the day for him, [and] I think he has a routine figured out by now,” she said. “Edward gets along with his peers and is always willing to participate, whether through Zoom or in-person [instruction].”

One of Cho’s friends, junior Dustin Lee, also mentioned the four-hour time difference between Pacific Standard Time and Brasília Time as well as the impact on their friendship.

“Sometimes I forget he’s over there and [I] text him super late at night like at 1 a.m., but he doesn’t answer, and then I remember he’s [in Brazil],” Lee said. “It felt kind of weird knowing that he would have school yet he wouldn’t be near me, and I was jealous he started school [later].”

His other friend, junior Max Lopez, said the time difference doesn’t really affect their friendship, but it could prove to be an advantage and disadvantage for Cho.

“It’s debatable since he wakes up at 11 a.m. for zero [period] while I wake up at 7 a.m., but he’s going to have to stay up a lot later [in] his time compared to mine,” said Lopez, who is also an IB student.

Cho agreed, adding that he stays up a little late to complete his school assignments.

“Although there are some benefits of starting school later, the main challenge is that the day ends [faster],” he said. “After sixth period, it’s 7 p.m. here, which shortens the time period for me to finish homework.”

Eventually, Cho said he and his brother will return to the U.S. when the district reaches Stage Three of opening schools, and students are required to rejoin in-person classes unless their parents have opted that they remain at home, he said, referencing a July 24 email from the Fullerton Joint Union High School District.

While he’s in São Paulo, though, life has been fairly normal, all things considered, with perhaps more coronavirus security measures than in the U.S.

“When I went to the supermarket, every worker was wearing a mask, there were hand sanitizers, a temperature check and plastic gloves for people who wanted extra safety measures,” Cho said. “I found it interesting how even supermarkets would provide these safety measures, even though it is just a supermarket.”

Even though supermarkets are pretty common in Orange County, too, he said there’s one food item unavailable in Brazil: In-N-Out.

“Sadly, there aren’t any hamburger places that have a similar taste to In-N-Out, but there are places that serve really good burgers,” he said. “The first time I ate In-N-Out was when I went to visit during the summer of 6th grade and it’s really good [with] grilled onions, their magic sauce [and a] milk shake.”

But coming back to America to eat an In-N-Out burger again isn’t worth it at the moment, Cho said.

“Because of the protests and the crazy stuff going on in the U.S., I think I’d rather stay here,” he said. “Because of that, coronavirus cases are rising in the U.S. while it is quite peaceful here.”