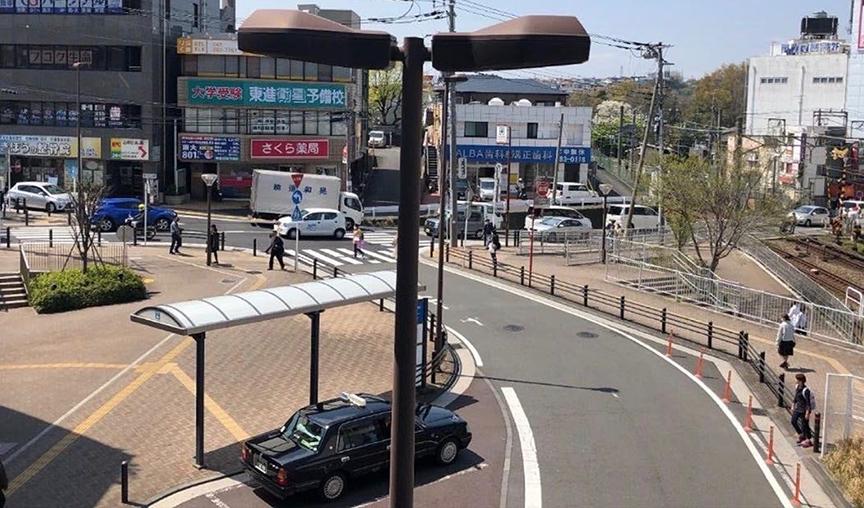 Sunny Hills sophomore Natalija Glavy's friend from Japan, junior Yuiri Takeuchi, captures this street scene in Yokohoma April 2 as she heads to school. Takeuchi says students are still going to classes, though officials are considering distance learning because of the coronavirus pandemic. For Japan, the school year starts in April and ends the following year in March. Image posted with permission from Yuiri Takeuchi.

Sophomore Ryan Lee’s friend, Bum Soo Kim, lives in Nanjing, China, in the Jiangsu Province — more than 450 miles west of the Wuhan province, reportedly the epicenter of the novel coronavirus outbreak in mid-January.

Lee said he has known Kim since he was in fourth grade, having first met him when Lee traveled to South Korea. But in 2018, Kim and his family had to move from Seoul to Nanjing because of his dad’s new job.

“When I watched the news about the coronavirus in China, I was worried so I texted Bum Soo,” Lee said. “He told me how everything changed and why he chose to stay in China even though it is dangerous.”

Currently in 10th grade, Kim said he has been attending the British School of Nanjing for two years.

Like with American schools, Kim’s campus closed down from Jan. 27 to March 31, transitioning to an online distance learning model. On May 1, students were allowed to return to classrooms, but their school year has been extended from ending in June to ending on July 10.

Since classes resumed on campus, Kim said he and his classmates always have to wear masks with the only exception being during PE; meanwhile, they must remain two meters — or a bit over six feet — away from each other.

“I didn’t like distance learning because I couldn’t do my favorite ceramics class in my house,” Kim said. “I am happy that I returned to the classroom and met my friends even though we can’t be close to each other.”

Unlike thousands of high school seniors nationwide in the United States, Kim and his peers will be able to watch a live graduation ceremony, which has been the case in most of the campuses in Asian countries.

“I am happy that I can see my seniors before they leave our school,” he said of the July 10 event. “If it wasn’t a live graduation, we would have done it by an app called Wechat.”

Kim shared a glimpse of what a delayed August graduation for Sunny Hills students would look like in providing the guidelines he and all those in attendance will have to follow at his school in China (Fullerton Joint Union High School District officials have tentatively an Aug. 6 date for a live commencement ceremony for Sunny Hills students at Buena Park High School’s football stadium):

Before friends and family are allowed into the ceremony, which will take place outdoors in a large field, they will have to get their temperature taken to ensure they do not have a fever; they will also have to wear masks and keep social distancing measures in place.

This month, the second largest city in the eastern region of China with a population of 8.5 million has loosened restrictions on businesses as well, as Kim said he has noticed that every store has opened, and people have to get their temperature taken before entering big malls.

GRADUATIONS NOT AFFECTED IN SINGAPORE

Singapore has the second most confirmed COVID-19 cases at 32,343 compared with China (82,992), Japan (16,628) and South Korea (11,225). Unlike the schools in the United States, Singapore starts the school year in January and ends in November. So schools had already held their commencement events before the coronavirus pandemic started.

Like with the outbreak of cases in the United States, people in Singapore have been emptying entire aisles such as canned goods and beverages in supermarkets.

“Many selfish people have been panic buying food, rushing to IKEA and meeting friends one last time,” said Jimin Kim, a sophomore studying in Raffles Institution and a friend of Sunny Hills sophomore, Violet Kim. “I feel like the situation will become better if people heed advice from the government to stay at home and wear a mask.”

Jimin Kim said she met Violet Kim in third grade in the East Coast Primary School in Singapore, where they became friends when Jimin Kim transferred there.

The lockdown period in Singapore has been challenging, especially for teenagers, Jimin Kim said.

“I felt lonely taking online classes in my room instead of a classroom with my friends,” she said. “I worked hard and did well in classes, but it was difficult not to meet my friends for months.”

Violet Kim has also been worried for her friend as the former has been keeping in touch with Jimin Kim via text messages.

“I was heartbroken when I heard the news as I’ve lived in Singapore for about five years, and I have tons of memories there.” Violet Kim said. “Even though I feel the racism [here] toward Asian people because of COVID-19, I feel lucky living in California because of all the support and friends I have here.”

BURDENED BY THE VIRUS

For Japan, the school year started only a month ago and ends the following year in March.

High school students in the city of Hyogo said they attended their spring live graduation ceremony in April. Except for wearing face masks and staying apart from each other, it was the same as previous years’ graduation ceremonies.

In Yokohama, students there said only pupils and teachers were allowed in the graduation ceremony. Students had to wait after the ceremony to receive their diploma.

In Japan, some public, private and international schools are closed and still utilizing distance education. However, some schools can’t afford to give all students computers, so they cannot hold any video sessions.

Freshman Kousei Abo, a student going to Hyogo Prefectural Yumenodai High School and living in Hyogo, is a friend of SH sophomore Elisa Kho having met in the summer of 2019 when Kho visited Japan.

“I think our school system won’t let school continue because the virus is getting worse every day,” Abo said in April. “I am worried because I have to go to school on April 8, and I might get the coronavirus.”

Junior Yuiri Takeuchi, a student at Yokohama Seiro High School and a friend of SH sophomore Natalija Glavy, complained about the limitations to learning in an online class model.

“My school is thinking about sending lesson videos to watch at home,” said Takeuchi, who befriended Glavy when she visited her grandmother in Japan in third grade. “I want schools in Japan to advance in technology so that we can participate in real-time video lessons and ask the teacher questions.”

Schools in Japan partially opened in May, but they only have met in class once every two weeks. Then students have been assigned online homework to do for the rest of the week.

In January, people walked around and took buses and trains as usual. However, In March, people stopped using public transportation as schools started to close.

The highest peak of the outbreak for Japan was in April, and by May 26, in the countryside, shops are open with fewer shoppers.

Although the coronavirus did not affect graduation ceremonies held in January in South Korea, ceremonies scheduled for February were downsized. Each educational institution decided in March to hold its commencements as the school year starts in April and ends in February.

Instead of a virtual graduation, they had a live graduation ceremony, but parents of graduates weren’t allowed to take pictures with their children, and they had to wait in front of the school entrance to greet their son or daughter.

Students didn’t get their diplomas during the ceremony; they had to wait and pick up graduation certificates in class when the ceremony ended.

Sophomore Lauren Moon, who goes to Incheon Posco High School in Incheon and attended SH her freshman year, was among those who attended the graduation day ceremony.

“I was very disappointed because I couldn’t take pictures with my visitors and classmates,” Moon said.

Once March rolled around, Moon said she started her first day not in a classroom, but in her own bedroom where she had to use her own laptop to check on her online assignments.

Moon didn’t fall asleep in any of her classes because she had to turn on the camera the entire class time as her teachers at times asked questions about the lesson to students.

“I was not too happy about using Zoom for online class. I have to spend seven-eight hours on my laptop,” Moon said. “It gives me a headache, and it’s harder to focus.”