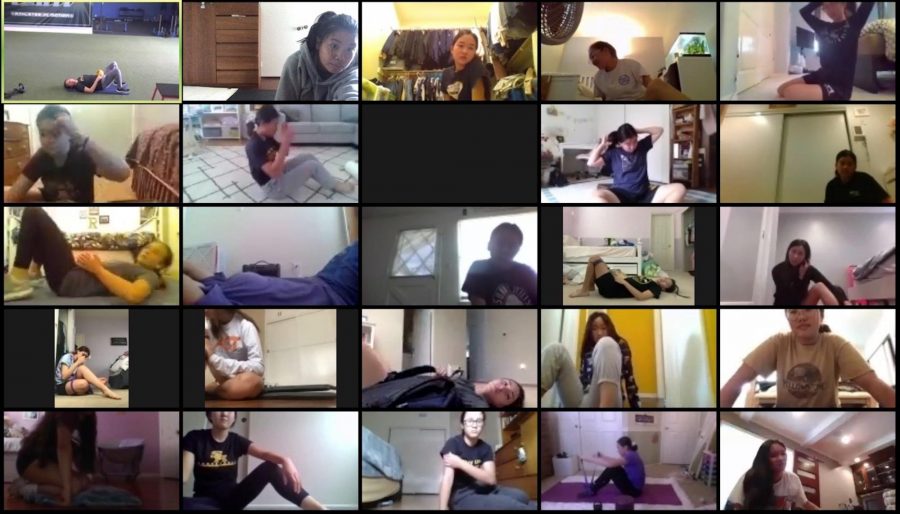 They are shut in, but they are not shut out — from staying fit as Sunny Hills student-athletes.

Though the spring sports season has been canceled because of COVID-19-related school closures statewide, and California Gov. Gavin Newsom has yet to lift his stay-at-home order, several athletes are choosing to exercise on their own or following the advice of their coaches.

Aquatics director and water polo and swim head coach Keith Nighswonger said he has been posting dryland workouts every weekday on his Google Classroom for all of his players to complete.

“We are unusual because a lot of land sports allow you to run and do land work that is similar to what your sport consists of,” Nighswonger said. “For swimmers and water polo players, all public pools are closed, so we must do alternative workouts.”

The workouts for his swimmers all cross over with swimming, but because not all athletes have access to a pool, the coach has been providing them with workouts like squats, leg lifts and lunges that are movement-oriented and lower body strengthening through Google Classroom postings.

“A basketball is a relatively good replacement if you don’t have a water polo ball,” Sereg said. “You can practice by throwing the ball against the wall and working on your form.”

Track and field athletes do not receive workout routines from their coaches through Google Classroom postings; however, they are encouraged with suggested strengthening workouts via email.

“I send out weekly emails to the entire program and have instructed returners to contact their event coach for specific workouts,” track and field and cross country head coach Jake Holloway said. “For sprinters, I have suggested they focus on plyometrics, core and flexibility exercises.”

Plyometrics are jumping exercises that sprinters are able to complete by jump roping, doing box jumps and lunges. Holloway also encourages his runners to maintain their flexibility to increase range and mobility by holding still and moving poses.

He reminds his athletes that as individuals, they are responsible for keeping themselves fit and healthy for the next season.

“I’m encouraging them to use this time well and come back with a positive mindset,” Holloway said.

Track and field hurdler sophomore Abigail Hahm said she came up with her own weekly exercise routine.

“I’ve been running a few miles a day around my neighborhood and have been doing some YouTube workouts,” Hahm said. “On the days I don’t run, I’ll focus more on ab workouts and stretching.”

Her motivation comes from the idea that she doesn’t want to fall behind within her team, she wants to stay productive and surpass her competition.

Tennis player sophomore Daniel Lee, who left the majority of his tennis gear in the athletic locker room on campus, has been doing daily workouts such as small stretches and reps of pushups to keep himself in shape.

“I actually brought my main racket home and have been just hitting balls against the wall with it,” Lee said. “Even though I wasn’t able to get any of my other gear, I’m lucky I brought my racket to practice.”

As of May 18, athletes are permitted to retrieve their gear from the PE/ Sports lockers from 8-3 on Thursday, May 21 and Friday, May 22.

Just as the quarantine was getting started, tennis player sophomore Carolyn Tran was able to visit the school tennis courts a couple times to get her last bits of tennis practice in.

Players on the baseball team have adjusted their throwing program, “Catch Play,” which allows the boys to still be able to practice their throwing and catching skills independently.

Whereas in practice they would throw with their teammates, the baseball players were instructed by their coach to follow the same regimen of throwing from different distances into a net.

“Most of the guys could play catch with someone at home. If not, they can figure out other methods,” said head baseball coach Arlie Kearney. “The most important thing for our players is to start building their strength through exercise and long toss.”

Kearney suggested that his players continue to practice “Catch Play” consistently to condition and stay prepared for the upcoming season.

“We start off with simple stretches and then transition into using arm bands as we move back and throw to the net,” pitcher junior Mateo Salas said. “It’s really been helping me keep my arm strength up.”

Athletes in off-season sports such as basketball and girls volleyball would normally be conditioning together as a team. But because workout and weight rooms have been closed down on campus, they have taken to Zoom video sessions to practice weekly with Athletes in Motion [AIM].

“Our off-season program, AIM, is still required at home; they set up a Zoom meeting every Monday and Thursday[2-3pm], and instructors guide us through different exercises,” volleyball player freshman Grace Min said. “The workouts AIM gives us are to activate specific muscles, so lately we’ve been doing a lot of glute work.”

The program, AIM, offers different workouts catered to each sport that the players are involved in.

“The Zoom sessions are stretching and movement exercises that are to keep the athletes from getting injured,” said head varsity girls basketball coach Jae Byun. “These Zoom calls consist of a trainer from Zoom, leading the players through a series of workouts.”

The girls basketball team has not been receiving any specific diet or food plan, but they have been given a series of suggested dribbling drills to do at home in the driveway or park.

As for the boys basketball team, the players have also been participating in the same off-season program, AIM, and have been joining Zoom calls with their head coach and AIM instructors to work on leg strengthening and cardio workouts.

The unexpected stay-at-home order has brought inconvenience and challenges for many coaches who have yet to plan a schedule to keep their athletes fit.

“We have not been doing much via Zoom as a program,” said head boys varsity basketball coach and assistant athletic director Joe Ok. “I think as the current situation we are in moves into summer, we will come up with more creative ways to keep our guys in shape as much as we can whether that is through Zoom or other ways.”

Though Sunny Hills coaches have provided frameworks for their athletes, many agree that like a normal sports season, it still comes down to the individual.

“A lot of the motivation has to come from within yourself; you need to have a lot of self-discipline when you’re staying at home because you don’t even have to walk in between classes,” Sereg said. “Our players need to remember that when self-quarantine is over, we’ll be heading back into a new season.”